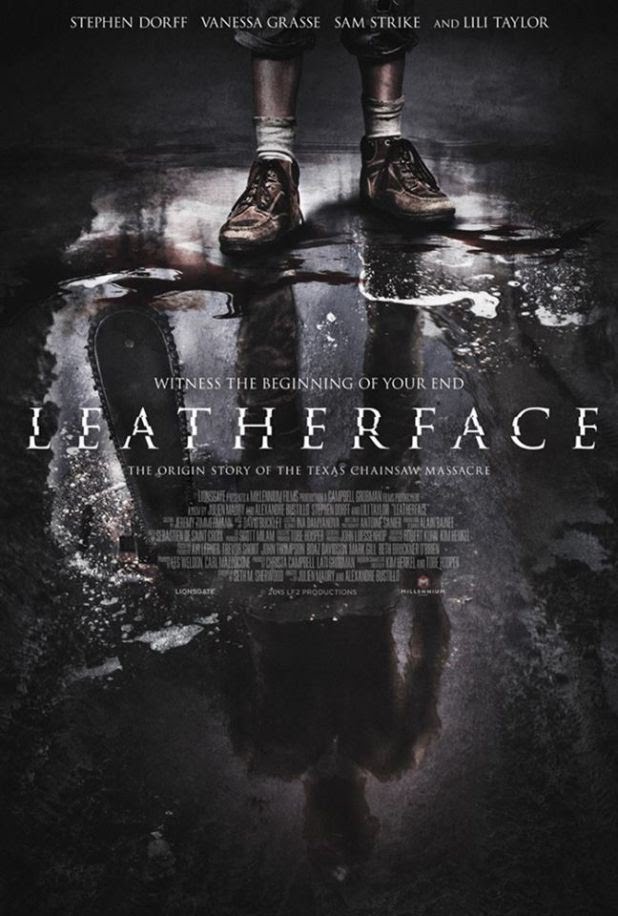 The origin story of our favorite Texas Chainsaw Massacre villain. Join Teenage Leatherface as he escapes from a mental hospital with a group of kids who may or may not be crazier than he is, all leading up to the life-changing moment when Leatherface grows up and finds his mask and chainsaw. Most of the time, you won’t know who Leatherface actually is. Apparently that was the point. We also get to see some of the family dynamic.

Note: spoilers are included in this review.

It seems like movie producers think everyone’s clamoring for an origin story for their favorite characters. Sometimes that’s not a bad thing – obviously superheroes need their motivations and even some villains require an understanding to give them more three-dimensional realism. Serial killers, on the other hand, generally have one thing in common: either something traumatic happened to them early in life, or they’ve always been this way. There’s no real need to get into the details of why our mysterious slashers like murdering people, and ultimately these attempts to explain behavior (when realistically there may not be an explanation) tend to result in disrupting the mystique of those killers.

Still, directors Alexandre Bustillo and Julien Maury think it’s worth an attempt to define Leatherface’s existence with a traumatic teenage experience in Leatherface, the so-called prequel to The Texas Chain Saw Massacre. And if anyone’s able to pull off a gory period piece about a chainsaw-wielding killer, it should be these guys: they’re the masterminds behind the 2007 film Inside. Their track record hasn’t exactly been stellar, but the potential for a successful prequel is apparent.

Unfortunately, Leatherface doesn’t really feel like a Texas Chain Saw Massacre film, making its efforts to enlighten audiences about the titular character’s descent into madness seem forced. Bustillo and Maury take the backwoods setting, the grimy family house, and the essence of most of the series’ familiar characters and cast them aside in favor of a plot about patients escaping from an asylum. The film follows Jackson (Sam Strike), Bud (Sam Coleman), Ike (James Bloor), Clarice (Jessica Madsen), and kidnapped nurse Lizzy (Vanessa Grasse) as they run from the police – primarily crazed Texas Ranger Hartman (Stephen Dorff) – and the idea is for Leatherface’s identity to gradually come to the surface over time.

But the script isn’t good enough to keep audiences guessing, and the film’s middle half lacks a gripping quality to keep viewers interested in the characters; there’s very little characterization for all of them, and Bustillo and Maury provide an unexciting guessing game as to which one of them is actually Leatherface. However, it should be pretty clear to most viewers anyway: the posters kind of give the identity away, and the film’s overwhelmingly generic approach to the teenagers makes Leatherface all the more obvious.

But the biggest problem with a lack of character development and the film’s reticence at revealing Leatherface is that, as a prequel, Leatherface isn’t good at explaining Leatherface’s murderous rage. Bustillo and Maury do a particularly poor job of showing Jackson’s change from well-meaning but mentally unstable hero to vengeful murderous pyschopath; it comes out of nowhere and negates the impact of that transformation. One would expect a bit more trauma here and there, perhaps some abuse. But Leatherface rarely delivers any of that, not even giving a reason for the character’s necro-fetishistic tendencies besides a random sex scene incorporating a dead body. Besides the title and some of the settings, it’s difficult to see the connection between this film and Tobe Hooper’s original. Leave out the chainsaw at the end and the sewn human mask and this could be the origin story of any killer.

That’s the most disappointing thing of all, too, because there are odes to the franchise sprinkled into the film. It’s just that Bustillo and Maury don’t make use of them, instead crafting an overwhelmingly generic horror movie. For a prequel, audiences expect more than what Leatherface delivers, and it’s certainly a letdown that the film rarely capitalizes on the lore of the series. Leatherface isn’t a horrible film; it just doesn’t feel like a precursor to The Texas Chain Saw Massacre, and that makes it more of a failure than it would be by any other title.

Considering the legacy of the series, Leatherface is pretty tame. There are some bloody chainsaw moments, pigs are fed chopped up human remains, and people are stabbed and shot in the head; yet the film’s overly-exaggerated violence desensitizes the audience to the situations. It’s dirty and bloody, but not particularly gruesome.

The film does deliver a sex scene involving Ike, Clarice, and a rotting dead body. It’s a fun moment because of its presumed stickiness (that’s kind of gross), and Jessica Madsen does show off her assets including derriere and her character’s scarred breasts.