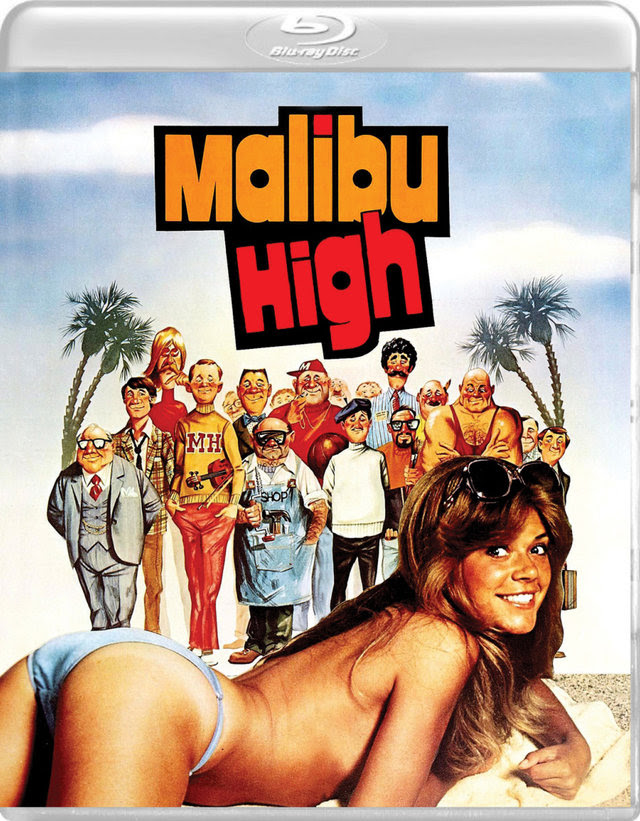 Malibu High Blu-ray Review (Vinegar Syndrome)
Malibu High is a weird film that combines the usual sex romp raunchiness with a more dramatic crime filter. Vinegar Syndrome does an excellent job with this Blu-Ray, both with transfer and packing the disc with special features.
Film
Blu-ray
Reader Rating0 Votes
4

Kim Bentley’s not doing well in school. She’s flunking out of all of her classes, she lost her lover Kevin to another girl, and she’s got no money to buy weed or a car to get around town. So what’s a girl to do but turn to prostitution to get what she wants?

Malibu High explores Kim’s life as she begins to sell herself on the street and sleep with her teachers for better grades, eventually getting caught up in a more dangerous racket involving murder.

On the surface, Malibu High looks like a generic raunchy sex comedy from the ’70s, and for most of Irvin Berwick’s film, that generalism sticks. Following the dreary Kim (Jill Lansing), the film features frequent tonal shifts from lighthearted shtick – like Kim’s insecure feuds with Annette (Tammy Taylor) or the soundtrack’s weird sitcom-esque synth stings whenever Kim acts like a brat – to more sinister scenarios at every turn.

Berwick has a penchant for doing these things in all the wrong places, though, and at the most inappropriate times. A drunk and stoned Kim discusses her plans at a new approach to life (by which she means hooking for money) and then has a dream sequence about when she found her father hanging from the ceiling; a drug purchase gets rapey fast. These moments are sobering, especially considering the jaunty music that scores much of the film.

But the film’s off-the-wall nature often gives it a more entertaining atmosphere, and that’s most noticeable when Berwick resorts to various softcore sex scenes. His handling of the tame nudity is amateurish and – dare I say – boring, but the crime aspects of Kim’s life once she begins to get into the seedy underbelly of prostitution and drug use add an interesting layer to Malibu High. While the film is by no means a prominent cinematic achievement of the period or genre (it’s poorly edited, poorly acted, and poorly written to name just a few of its flaws), it’s also a particularly curious amalgamation of ideas. Just don’t hold out for a satisfying conclusion, because Malibu High climaxes, lets out a deep sigh, and dies.

Malibu High has a large number of dead bodies for what one presupposes is simply a high school comedy. There’s an early moment when a young pigtailed Kim walks into her father’s room to find him hanging from the ceiling; later on, when Kim begins to murder for her job, we get various gunshot wounds, the most grisly being the death of poor Annette’s father. There’s also a tame icepick stabbing in the back and a heart attack that, while not violent, is still somewhat shocking in its cruelty.

Basically, Malibu High is all about showing off the Jill Lansing goodies. She remains topless for about 55% of the film, and she does get down to her undies a fair portion as well. There must have been a full-frontal restriction, however, because she refrains from going fully pantsless. Tammy Taylor also drops her top, and for the ladies, a bunch of hairy shirtless dudes roll around with Jill.

Vinegar Syndrome has done a new 2k scan from the film’s original 35mm camera negative for Malibu High, to great results. While some heavy grain shows through in outdoor sequences and most notably at the beginning of the film, all other shots feature great depth and clarity as well as great color contrast. Though the film’s cinematography isn’t amazing, the film still looks great on Blu-Ray with no signs of damage or blemishes. Fans looking for a great picture image for Malibu High will not need to look any further than what Vinegar Syndrome has offered with this Blu-Ray.

The audio for Malibu High is presented in the film’s original DTS-HD mono track, and while there is realistically not a lot of depth or interesting elements to the soundtrack, this still sounds good without any muffled areas except for those already present in the film (like any indoor sequence in Kim’s kitchen, which seems to have been a tricky spot for them to capture dialogue).

Where this Blu-Ray really shines is the special features. This is a loaded release, especially for this type of film, and it includes various interviews with cast and crew. A group audio commentary includes Lawrence Foldes, Tammy Taylor, and Garth Pillsbury, and the three also provide their own interviews in separate featurettes.

Lawrence Foldes gives the longest at about 26 minutes, discussing his work on the film and interaction with Berwick as well as providing a sleazy anecdote about casting.

Tammy Taylor seems to be game for conversation and provides a 12+ minute conversation about her experiences on set, including the professionalism of the shoots, turning a Mexican restaurant into a disco, and more.

Garth Pillsbury gives a 15 minute interview about his career in show business as well as a few stories from the shoot.

Another interesting inclusion from Vinegar Syndrome is a 26 minute Q&A from a New Beverly screening of Malibu High, which will interest those who want to hear from Alex Mann (who passed away in 2010). Two short films from Lawrence Foldes also find their way on this disc, as do promo galleries and theatrical trailer.

Plus, this is a DVD/Blu-Ray combo pack, so there’s added value there as well. Overall this is a monster of a release for a truly cult film, and fans of these types of movies will certainly want to attend Malibu High.