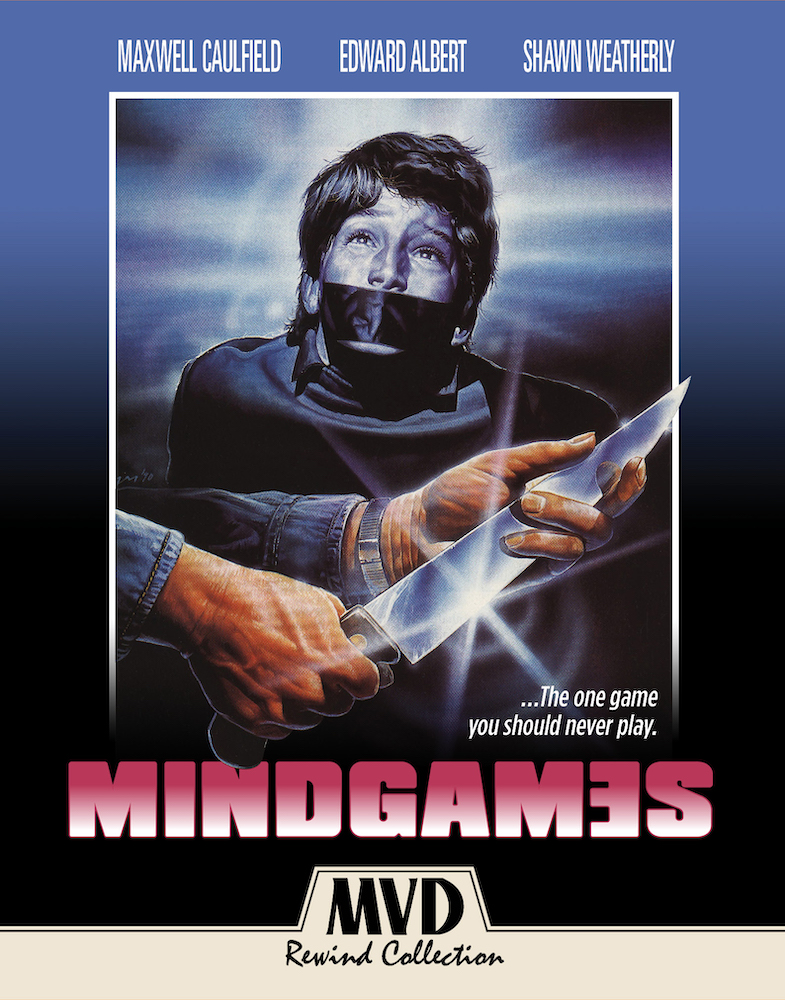 Maxwell Caulfield was the quintessential late-’80s star. He had the boy-next-door good looks with the sandy blonde hair and the muscular physique; he had a winning smile; and he had the ability to charm anyone with a naturally sunny disposition. And when Grease 2 flopped tremendously, directors found a new angle for Caulfield besides the boy your teenage daughter might have a crush on… a troubled man with dark mysteries at heart. In 1985, Penelophe Spheeris used his penchant for bad boy behavior in The Boys Next Door. Then, in 1989, director Bob Yari recognized the same qualities, albeit emphasizing them somewhat differently, with the psychological road trip thriller Mind Games.

The film finds Rita (Shawn Weatherly), Dana (Edward Albert), and their son Kevin (Matt Norero) heading out on a family outing through California and Nevada in an attempt to rekindle the family dynamic, specifically working to even out the midlife crisis Rita has been going through. Turns out, secluding yourselves in an RV and going sightseeing doesn’t really help; but picking up hitchhiker/flutist/abnormal psychology major Eric (Caulfield) does, because Kevin immediately takes a shine to him and Rita slowly cozies up to his charms – until he reveals he’s not quite the nice man he seems.

Kenneth Dorward’s script is meant to bring out the tension of inviting a random person along on a family vaca, but at times Mind Games will feel a little outre to modern audiences; it’s pretty unlikely that anyone in the year 2020 would pick up a random hitchhiker, let alone bring them on all sorts of excursions. Yet setting aside those issues with the film’s realism reveals a nuanced thriller that differs from Caulfield’s previous stint as a budding murderer. Here, Eric’s work isn’t so much about rampant violence and terror as it is an experiment in human observation, where he introduces a number of obstacles in the family’s path so that he can study their reactions in real time.

It’s a compelling plot that also keeps things moving at a rapid click despite the film’s limited cast and consistent RV setting. Weatherly isn’t the best actress, but she does a fairly good job selling Rita’s restlessness, and she’s even better at making her extremely unlikable throughout the first half of the film. Caulfield is excellent in both elements of his character: he truly is a charmer early on, but the turning point – where he takes Kevin to a farmhouse just to have him destroy everything inside it – creates for great juxtaposition.

Mind Games doesn’t play as many games as its title suggests, but what it does do is offer an unsettling depiction of realtime psychological study. The film’s tension comes from its insistence that Eric isn’t truly an evil person just out to cause mischief – he’s doing it for purpose. And the more effective theme is delivered right at the end: in some ways, his ploy actually did strengthen this family.

MVD Rewind Collection has given Mind Games a new Blu-ray release with an HD transfer of the film presented in original 1.78:1 aspect ratio. None of the packaging describes exactly what source was used, but I might guess an interpositive. The opening reel looks a bit rough with a healthy smattering of damage and burns, but after that initial credits sequence, the quality evens out with a consistently medium-bodied grain scale that maintains good depth and detail. There is the occasional soft scene that crops up – most notably in darker outdoor medium-range shots – but overall this Blu-ray presents nice picture quality that navigates the film’s notoriously dark shots with no black crush, along with keeping some overblown whites to a minimum.

CHECK OUT
Our gallery of screenshots from this Blu-ray.

Audio is presented with a 2.0 LPCM English track that sounds quite good, with clear audio and appropriate volume control. English subtitles are also optional with only a few slight errors.

The big draw for this release is a new feature-length making-of featurette that runs an hour and 47 minutes and includes interviews with Yari, Weatherly, Norero, and Caulfield, along with producer Mary Apick. This is a great doc that answers pretty much any question you might have about the film, even going into the stars’ backgrounds and discussing recasting for Dana. Also included is a highlight of producer Bob Yari’s career that runs about a half hour.

Also included is a trailer for Mind Games and many other MVD releases, a reversible sleeve with alternate artwork, and a mini-poster of the front cover artwork.

Mind Games is a different kind of thriller with Maxwell Caulfield playing another bad boy character; it works mainly because of its unique premise. MVD Rewind has added another great Blu-ray to its Collection.
Film
Blu-ray
Reader Rating0 Votes
Good
Film has quite a bit of tension
Nice HD transfer
Great full-length documentary
Bad
A few softer moments in the transfer
4
Buy
Amazon
Hosting screenshots is expensive. If you want to see more galleries, consider donating!