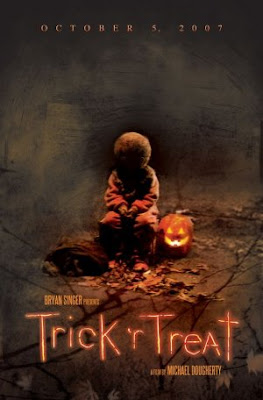 The wait for Trick ‘r Treat has been a long and arduous one. I remember reading a book about the film a while back in ’08 and anticipating its release long before now. But finally the release is upon us, and just in time for Halloween – and Trick ‘r Treat definitely knows how to get the audience into the Halloween spirit.

The film is anthology-based, with all parts of the film taking place on the same Halloween night. Each story interlaps with the others, and scenes from the stories are shown at different times. The first arc is a quick killing of a woman who wants to end Halloween night early, and for her, it certainly does end. The next centers on a principal who takes Halloween to the extreme by killing children who don’t take the customs of the holiday seriously. The third story revolves around children who find more than they bargained for when they play a trick on one of their classmates at a haunted lake, the fourth about a group of women holding a party in the woods where they are “threatened” by the same principal from before, and the fifth about a grumpy old man getting his dues after refusing to hand out candy.

The stories are nicely varied, rarely tackling the same subjects. Trick ‘r Treat touches on a lot of Halloween themes, but it doesn’t retread them. Werewolves, fake vampires, ghosts, and murderers all appear, but they don’t feel copied; they are more like new urban legends, played out like stories told over decades that have finally found a medium in film.

Trick ‘r Treat also touches on some genre staples that add a dimension of inspiration to the whole film. One can see a bit of slasher influence in the scenes where Sam stalks his prey; werewolf love for the transformation scenes; even anthology series like Tales from the Crypt are honored, especially in the fifth story, which feels like a Tales from the Darkside episode where a cranky old man is visited by a demon on Halloween.

But though the stories are interesting, it’s the Halloween atmosphere that will make this an annual holiday film. Everything that is awesome about Halloween is somehow presented in the film, from dark paths in town lined with pumpkins (how cool would that be?!) to a town Halloween party to a Halloween PARADE! I need to live in this town. Trick ‘r Treat channels the spirit of Halloween and smartly places it within the world of the film.

Michael Dougherty knows Halloween. His presentation is totally accurate, and the film’s premise of combining all of the events into one night is a child’s dream of what Halloween consists of. The stories are strong, the pacing fantastic, and the themes pleasing to those of us who love the holiday and wonder how anyone could not. Trick ‘r Treat has come along and given us a film that is the most successful Halloween-centered film in ages, and no one could be more happier than me. It is hard to stay unbiased toward the film and pick out subjective topics to think about when I find the film so thrilling. It’s like it was tailor-made for my enjoyment. This is highly recommended, a film that has been a long time in coming but one that has delivered everything I could have hoped for.