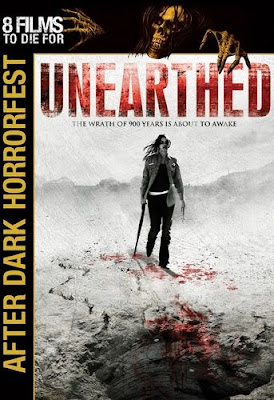 AH! Big alien creature containing DNA from all five kingdoms of organisms awakens after a deep poison-induced sleep to reign terror on a sleepy town with a drunk for a sheriff (Emmanuelle Vaugier). The characters find radioactivity to be the baddy’s weakness, and devise a uranium shot for the alien, but is it too late?!

Unearthed is a mediocre creature feature through and through. Despite its fairly smart plot, it contains a number of flaws that detract from a truly enjoyable viewing experience. One of these is awful CGI; Unearthed refuses to leave the monster to the imagination, utterly ruining any tension that may be created by atmospherics in the process. The monster is not scary; it looks like a highly animated Alien monster, even spitting at its victims. It bounds like a dog, which is meant to be extremely frightening but comes off as cartoonish because of the unrealistic design. We are supposed to be able to pretend that this thing is real? It’s movements aren’t even very smooth, and it looks more like a video game villain than any serious killer.

The second is Unearthed‘s reliance on the sheriff as a character. She doesn’t feel like a protagonist; in fact, she begins the movie fairly unlikeable and remains that way until her suicidal “sacrifice” at the film’s conclusion. Unfortunately, there is no growth to her character – she stays weak through the whole movie, and her sacrifice at the end is less like a selfless act to protect civilians than it is an easy way out of a crap life. Because of her flashbacks to particularly terrible scenes within her life, the sheriff’s last thoughts in life are awful memories, and then she kills herself. It doesn’t seem like she’s doing this because she knows it’s the only way to kill the monster – it would be easy enough to swing the uranium shot at it anyway, since it’s only a few feet from her. Rather, it’s a suicide that conveniently acts as monster murder, at least in my mind, which leaves a disagreeable taste in the mouth.

Unearthed has some good ideas, though. Scientifically, the alien has a pretty cool genetic composition, and it’s unfortunate that the film’s writer (and director) Matthew Leutwyler didn’t use some of its more unique qualities to their full potential. Instead, the alien becomes a stereotypical killing machine that is more focused on annihilating the human race than preserving and manufacturing any DNA to take back to its planet. This is a consistency error; if the alien is scouting the planet for life forms, why would it be so encouraged to kill them? If this is supposed to indicate that the alien was somehow wronged in previous years, it’s not made clear enough within the film to build any sort of connection.

I did like the attempt to characterize the sheriff, however, and there are some scenes which attempt to create a bond between character and audience that don’t always come off well, or at all, in more generically-scripted horror films. It doesn’t work particularly well towards character growth as the suicide pretty much eradicates any sense of self-fulfillment, but at least it was a step in the right direction.

Unearthed suffers from the SyFy Original Series’ monster formula. If bad CGI doesn’t take you out of the film’s premise, then you might actually find Unearthed to be an acceptable monster movie. But if it’s depth of character or suspenseful moments you’re looking for, as I was, you might want to check out something a bit more substantial than what this film has to offer in terms of story and creature realism.