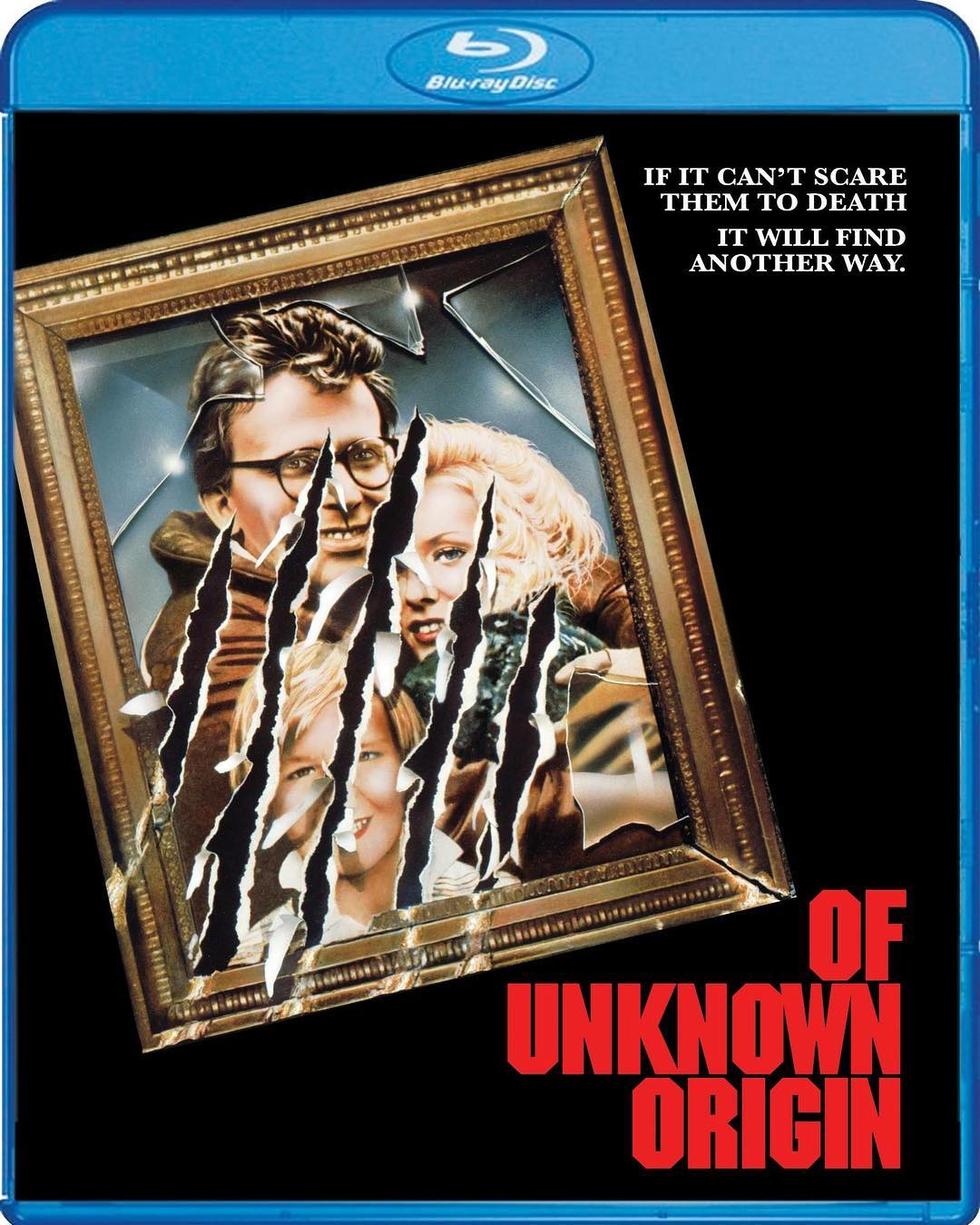 Bart Hughes is a successful career man who has been steadily moving up the corporate ladder, and he’s just been granted the opportunity to deliver an important presentation at his job. His wife and kid are out of town, too, affording him complete solitude to get this thing done. Except there’s one problem – a huge rat has infested Bart’s newly-renovated house, and he can’t catch the bugger. Part horror, part comedy, Of Unknown Origin documents a man’s fight for his life against a seriously smart rodent.

Looking at the cover artwork for Of Unknown Origin, it’s particularly hard to tell what the film is about. Is it a movie featuring marital strife and domestic abuse? A werewolf tale? Something else? The film’s title doesn’t help either, reading more like a psychological schism. While most films would be hesitant to keep the subject matter such a secret, in Of Unknown Origin‘s case, it surprisingly works. The film hides its main conceit for a while before clarifying its monstrous animal, and in those moments the viewer is left scrambling to figure out what exactly could be wreaking havoc in Bart Hughes’ (Peter Weller) home; and then, with the rat’s first appearance, writer Brian Taggert’s B-movie experience shines through.

Director George P. Cosmatos follows Bart throughout his alone time at home while his family is vacationing elsewhere as the man continues to lose his sanity, first refusing to do anything to harm the home that he has rebuilt personally, eventually succumbing to the literal cat-and-mouse game as man and rat continue to one-up each other daily. It also helps that Cosmatos builds up stress in other ways when Bart’s job gives him a deadline to complete a very important package deal for his company; the external stimuli, paired with Weller’s excellent (sometimes intentionally over-the-top) acting, help sell a man whose fragility very nearly breaks him. And the consistent references to Moby Dick symbolize the masculine motivation that drives Bart to capture his prey.

The whole thing plays out fairly seriously, but Taggert and Cosmatos obviously understand the underlying comedy inherent in one man’s fight against a rat. And truthfully, it’s important Of Unknown Origin emphasizes its more exaggerated moments, because otherwise the film would devolve into a series of ridiculous battles between Bart and the rat with little in between. Weller gives Bart a personality, one that highlights the black humor in his fight, at times even affectionately referring to the rat as “darling” or fighting with him in his own bed. The quirks make the film, and though Taggert does some serious research on the invasive qualities of the species, the rat becomes a more comical metaphor for man’s fight against anything that threatens a human’s safest space: the home.

With that said, Of Unknown Origin struggles to maintain itself throughout a 90 minute runtime, and at times the whole thing threatens to collapse. It’s a bit overlong and would have possibly made a better short or component of an anthology series rather than a full-length feature. Since it focuses so heavily on Bart, Cosmatos has to force some human companionship into the film too; a short tryst between Bart and his secretary Lorrie (Jennifer Dale) is explained because of Bart’s wife Meg’s (Shannon Tweed) apparent unhappiness in the marriage, but it’s not sold and Meg is actually quite loving throughout. And it also doesn’t make any sense because Tweed looks smoking in this.

Though there are a couple of missed opportunities throughout, Of Unknown Origin is a fun rat film with a compelling leading man in Weller, and fans of animal attack cinema should enjoy this man-vs-rat outing. It features a number of great moments – an awkward rat dinner conversation, the entirety of Louis Del Grande’s presence – and its recognition of its B-movie qualities means the viewer can laugh at the film without it being at Of Unknown Origin‘s expense. The filmmakers knew what kind of movie this was supposed to be, and they embrace the cheese as any true rat would.

The film isn’t overly violent because there aren’t any deaths in it, but Bart is occasionally bloodied by the rat’s bites and suffers a brutal injury due to a missplaced metal rat trap. Also, there’s some uncomfortable footage of real rat brutality in a documentary.

There’s a quick shot of Shannon Tweed in the shower where you can see her breasts, but once she disappears throughout the film we’re just left with Peter Weller looking hunky and sporting some serious ’80s glasses.

Scream Factory has released Of Unknown Origin on Blu-ray with a new 2k scan of the interpositive, and I must say that it looks quite impressive. It features a healthy amount of grain that is more apparent in lighter scenes or things with white backgrounds such as the house wall, but it’s not chunky or intrusive. Color timing is good with no real inconsistencies, and dark scenes are contrasted well too. The transfer is crisp and clean with no damage, and Scream Factory has done a great job with this 2k scan.

The audio offered on this Blu-ray is a DTS-HD 2.0 Master Audio track, which sounds quite good except for some limitations that seem inherent in the film itself. There can be a slight reverb effect at times in Bart’s office as well as a couple of quieter dialogue moments, but these seem like flaws that have always been in the film and not an issue with Scream Factory’s track. Overall a solid audio experience with an English subtitle as well.

There are a surprising number of extras on this disc including an older audio commentary from Peter Weller and George P. Cosmatos that goes into the production side of the film. For new features, Scream Factory has assembled three interviews ranging 14-17 minutes: one with executive producer Pierre David, who goes into the background of how the film got made; writer Brian Taggert, who explores the changes he made adapting the book; and actor Louis Del Grande, who is a character throughout the interview and talks about both Of Unknown Origin and Scanners. There is also a theatrical trailer and a still gallery. 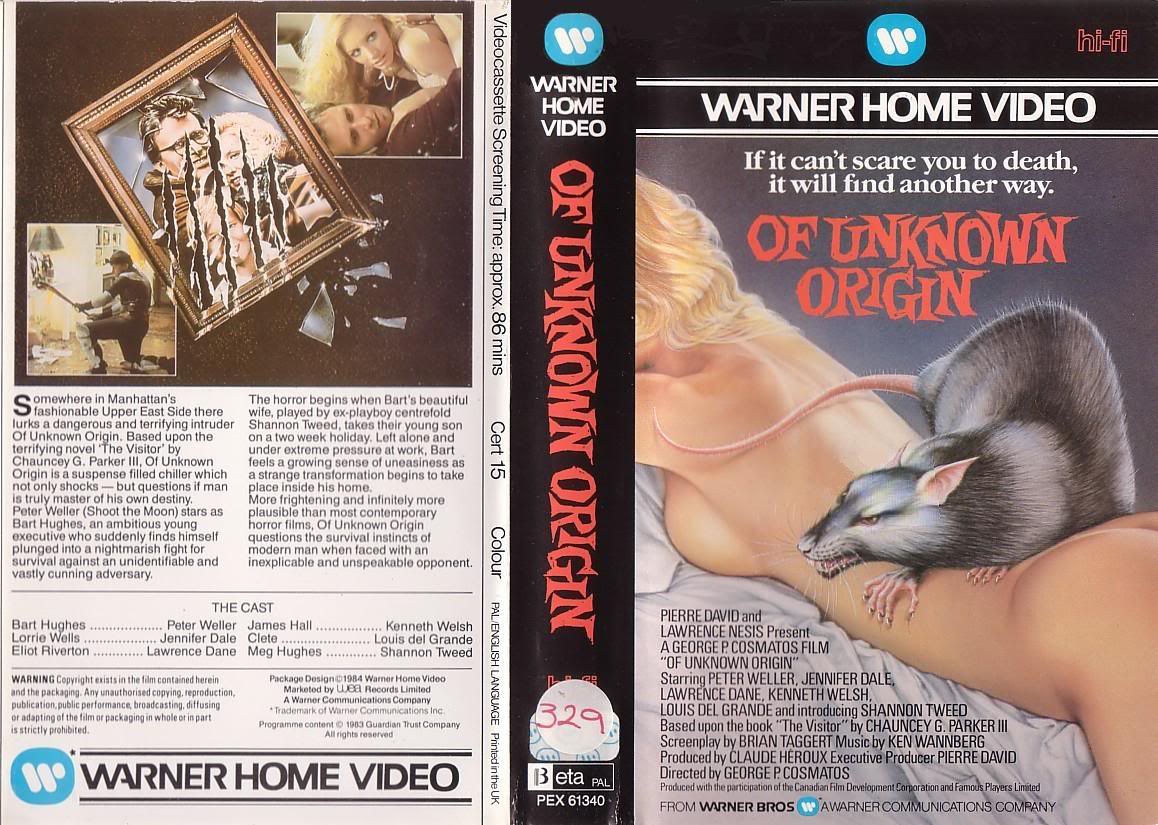 The case itself comes with an interior picture of Peter Weller and details on the scan; it’s unfortunate that Scream Factory didn’t include the racy alternate artwork for the film which basically featured an artistic representation of Shannon Tweed in the buff.

Other than that, though, this is a solid release that fans of this film will want to pick up. Those who haven’t seen it but love movies like Ben and Willard will also want to catch this rat race.