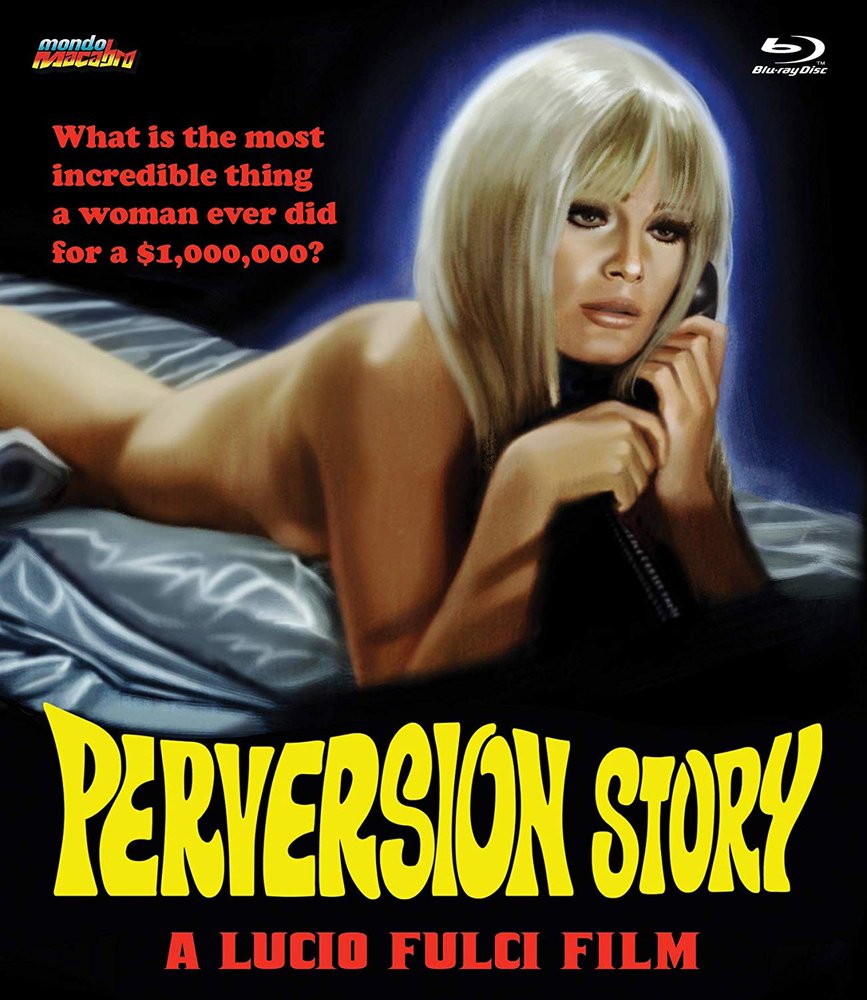 Perversion Story is an enjoyable thriller, with lots of twists and turns aplenty. Mondo Macabro has done an excellent job released the flick on Blu-ray, providing us with the extended cut of the film, and delightful interviews.
Film
Blu-ray
Reader Rating0 Votes
4.4

There are probably a few people out there that aren’t aware that Lucio Fulci wasn’t just all zombies and violent films. No, in fact in the 60s, he dabbled in a few comedies (002 operazione Luna, How We Got Into Trouble with the Army) and even a western (The Brute and the Beast). Another film that differs from his other more popular titles is the Giallo laced thriller Perversion Story, also known as One on Top of the Other. Released in 1969, Perversion Story was Fulci’s first attempt at breaking into the international market.

The story behind Perversion Story has actor Jean Sorel playing Dr George Dumurrier, a man whose clinic is in debt, his wife, Susan (Marisa Mell) doesn’t love him, and even worse, she is sick and has constant asthma attacks. While George longs for the good old days when they loved each other, he is also finding some love on the side with Jane (Elsa Martinelli), a photographer who dabbles in taking photos of naked women in weird places (seriously, I’m not entirely sure what her job really is about).

Susan ends up suffocating during an asthma attack and leaves George with a substantial insurance claim. George is distraught, and a bit confused, as he was completely unaware of the policy, and is worried things won’t look good for him. It isn’t long, though, before George is contacted by a mysterious person to check out the main highlight at a local strip club. He heads to the club and sees who is performing, a woman by the name of Monica Weston who looks exactly like his recently deceased wife. How is this possible? Is Susan dead, is it all just a weird coincidence, or is there more to than meets the eye? If this wasn’t problem enough, both an insurance company and the police are investigating Susan’s death, and suspect George had something to do with it.

Perversion Story seems like a vastly different film from what we would come to know as a Fulci film, but that most certainly does not mean it’s a bad movie. Perversion Story is a splendid thriller, with a bunch of twists and turns you probably won’t see coming. Fulci also capitalises on the beautiful and scenic settings of San Francisco, with cinematographer Alejandro Ulloa taking in everything with his wide open lens. Even more appealing is Marisa Mell, who plays both the unloving wife and playful stripper. She is a sight for sore eyes and does a fantastic job nailing both profoundly different roles.

Now, with a name like Perversion Story, one might think the film is laced with nudity, sex, and all sorts of raunchy shenanigans, but one will be slightly disappointed. Yes, the film does have nudity, but it’s not pointless and in your face for no apparent reason. You’ll probably end up being very surprised at how serious the film is given the different posters and names of the flick.

Mondo Macabro has released Perversion Story on a single Blu-ray disc release, with an HD transfer from the original negative. For the first time, viewers get to see the full extended European version, that provides more dialogue and a bit more nudity. As for the video transfer, the film comes across clean, with only a tiny bit of dust and debris present. Overall, the transfer is solid. Audio is provided in both English and Italian language with optional English subtitles. The sound is DTS-HD MA Mono for both the English and Italian tracks.

As for special features, we have an interview with actor Jean Sorel, provided in Italian with English subs. He goes over his history in working in the Italian film industry and his involvements with Lucio Fulci. The feature runs for roughly 30 minutes. Next, you have an interview with star Elsa Martinelli, who goes a bit into her role in the film and her work with Fulci. Once again, Italian with English subs. Roughly 10 minutes. Finally, for interviews, you have a 38 minute sit down with Stephen Thrower (author of Beyond Terror: The Films of Lucio Fulci), who goes into the history of the film and provides plenty of interesting tidbits about the making of (was originally going to be shot in Louisiana and then New York but was switched to San Fran.) Rounding it all out is a trailer for Perversion Story and some other Mondo releases.