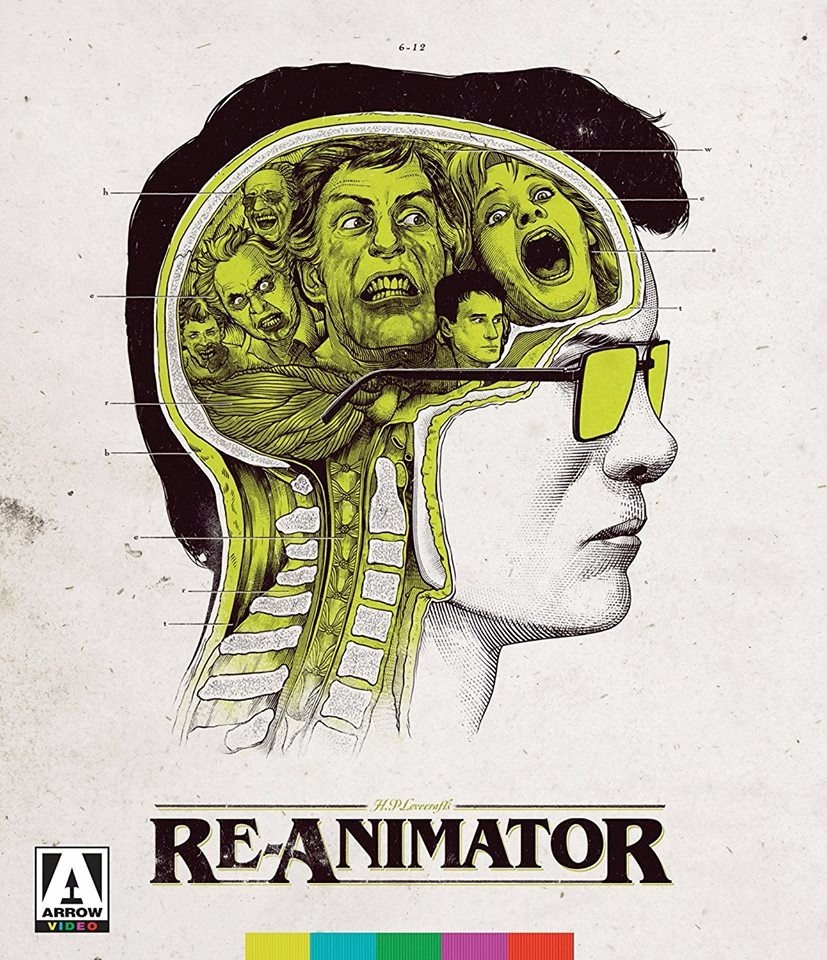 Medical student, Dan Cain (Bruce Abbott) is in desperate need of a new roommate, and what better person than the quiet Herbert West (Jeffrey Combs). Moving in, however, is all part of West’s plan to get Dan to help him out on his re-animating serum, that only has a few quirks to work out, mainly the homicidal zombie like rage that re-animated corpses experience. Still, Dan sees the potential and agrees to help. Unfortunately for the two of them, crazy Hypno doctor Carl Hill (David Gale) also sees the potential and will stop at nothing to get the serum, the credit and Dan’s girlfriend Megan (Barbara Crampton). Cue the wacky re-animated, plasma drenched shenanigans and Barbara’s delicious naked body. Man, I love this movie!

As evident in the special feature A Guide to Lovecraftian Cinema, there have been many Lovecraft adaptions, but Re-Animator is probably one of the best ones. That’s all thanks to director Stuart Gordon, cast Jeffrey Combs, David Gale, Barbara Crampton, the amazing special effects and the quirky humour that runs through its veins.

Re-Animator is a blood drenched special effects extravaganza, that doesn’t shy away from showing all the gooey details, be it re-animated corpses coming to life or the beautiful Barbara Crampton strapped naked to a table while a severed head licks her entire body.

The dark humour that runs throughout Re-Animator helps make the movie more enjoyable, and it is one horror film that doesn’t want you to take it seriously, a running trend with Stuart Gordon directed films.

Re-Animator has been cut together into a few different versions, but the one version that has become accepted by almost everyone is titled the Integral cut. This cut takes the unrated version and TV version and mashes them together to a create a more coherent story that relies on developing the plot, but not skipping out on the graphic gore. The unrated cut, on the other hand, is a faster-paced version, which says screw you plot, let’s just show Crampton’s boobs and some gnarly gore. Either version is fine, but the Integral comes out slightly ahead with a better narrative experience.

Re-animator is a violent, blood drenched film with bursting eyeballs, mangled corpses, a severed talking head, and that’s just the tip of the iceberg. The film presents all of this with practical effects that are phenomenal. This is one film that is not for the faint of heart.

Barbara Crampton bares it all in Re-Animator, and for that, I give her two standing ovations. She is drop dead gorgeous and has a nice pair of assets to go along with her righteous 80s bush.

Things to be prepared for: A severed head is licking Crampton’s boobs, and the head starts to go down town, before being rudely interrupted. Also, the occasional disfigured penis or boob.

One could quickly lose count of how many editions of Re-Animator are out there on DVD, Blu-ray and so on. It’s basically up there with Halloween and Evil Dead II. It’s pretty ridiculous, but I think we can finally end the costly buying cycle with Arrow Video’s Limited Edition release of Re-Animator. Stacked full, bursting at the seams with special features, the Blu-ray offers up two cuts of the film, the unrated edition and the integral cut, and both are 4K restorations at 1080p resolution; the film has never looked better.

I’ve compared screen grabs from other releases of Re-Animator, and I have to say that Arrow Video tops them all. Either the other releases had some DNR applied or had compression or softness issues, but none of that is an issue with the Arrow Video release. The grain is intact but never heavy, and there are some scratches present but never distracting. This Blu-ray release is the be all end all of Re-Animator transfers. In the gallery above, I have provided a few different screen shots of the different versions (thanks to caps-a-holic), and you can see for yourself how damn beautiful the Arrow release looks.

Arrow offers up plenty of new and old material to peruse through. If you want to watch and listen to it all, you are going to be days doing so. If you want to watch only the new stuff, the list below will be what you will need to watch. As for me, the most interesting feature was the guide to Lovecraftian Cinema, curated by Chris Lackey who hosts a Lovecraft podcast. The feature goes through pretty much all of Lovecraft’s work put to film and TV. (Interesting note, the recently reviewed Feed the Light is not mentioned.)

Rounding out this amazing package is a hard slip box, which houses the digipack of the two discs, some lobby cards and the standard booklet/essay from Arrow. Also provided in this Limited Edition release is a 92-page reproduction of the Re-Animator comics released in 1991.

The Catastrophe of Success: Stuart Gordon and the Organic Theater (approx. 13 mins)