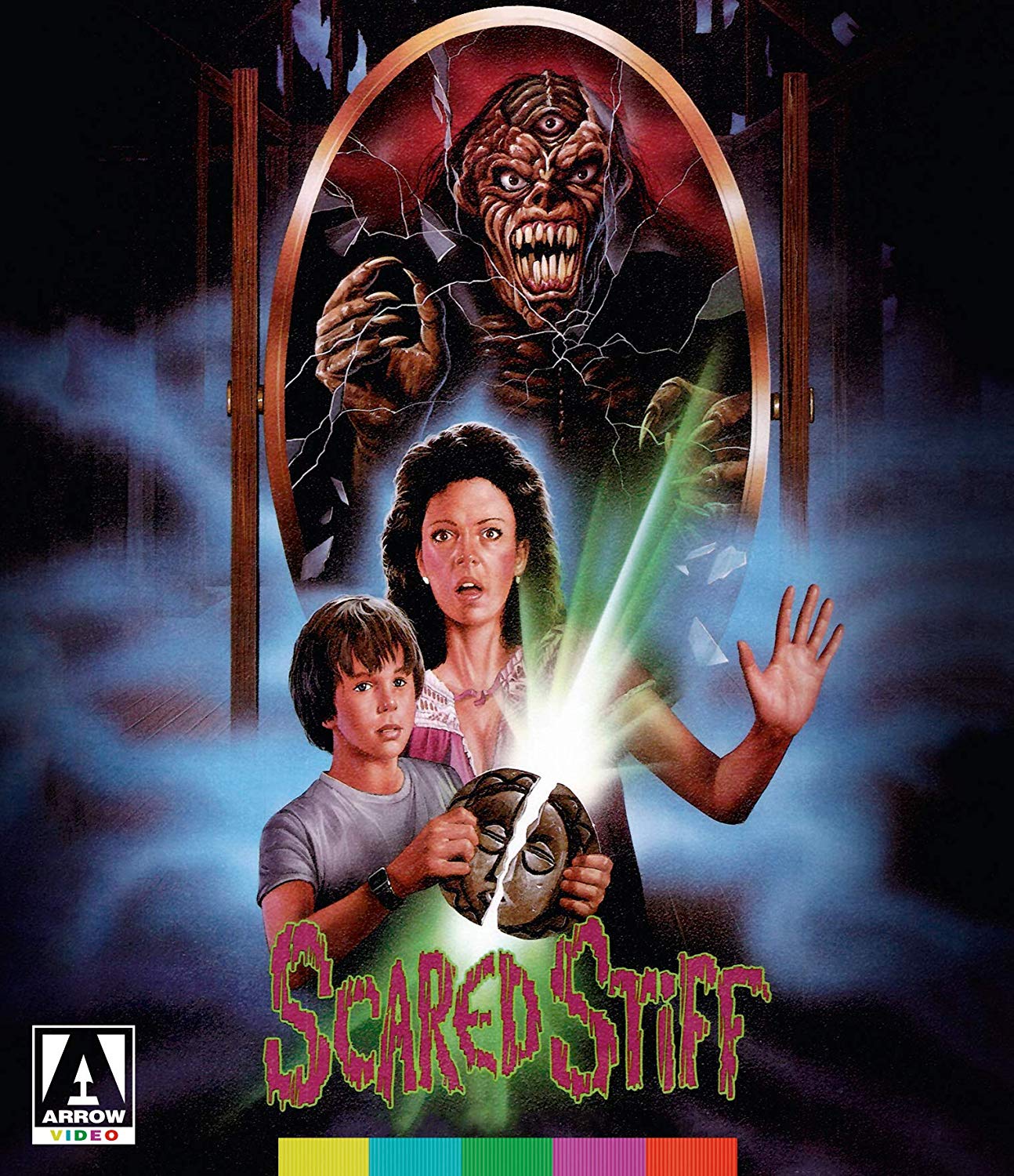 One of the best things about Arrow Video, besides the usual fantastic-looking release and an impressive assortment of extra features, is when they look in the past and find a rare horror film. A horror film that lived in weird obscurity where you may have seen it on VHS or a crappy stream on YouTube. Arrow Video will take the largely unknown film and put effort into restoring it, even if the movie isn’t the best. Scared Stiff, a 1987 horror film (should not be confused with the 1987 horror comedy also titled Scared Stiff starring Chow Yun-Fat) is one of those films. Scared Stiff, also known as The Masterson Curse, is about as obscure of a horror film you could find. Arrow Video, however, says that doesn’t matter and went ahead and released a fantastic Blu-ray. We’ll get to the Blu-ray soon, but for now, let’s discuss the film and see whether it’s good or not.

I’m not going to cheat and look up a detailed synopsis of Scared Stiff to refresh my memory as that wouldn’t be fair to people that go in and experience the film the same way I did. I’m going to try to explain the plot based on what I saw and what I understood (lord help me, this is going to be hard). Many years ago, a slave owner by the name of Charles Masterson found out that some black people in his home were casting a curse. We cut to a tribe on the Ivory Coast, who is also throwing a curse on Masterson. Back to Masterson, he storms into his home just as the head curse caster gives Masterson’s wife an amulet that will protect her. Masterson shoves her out of the way and kills the intruders. Cut to the ’80s, where a doctor, David Young (Andrew Stevens – 10 to Midnight) is moving into the same house. His girlfriend Kate (Mary Page Keller), who has recently just gotten out of the loony bin, and her son Jason (Josh Segal), who has a fear of pigeons, are also moving in with him.

As the family get comfortable in the home, they soon find that the place has an attic and inside the attic is a trunk that contains dead bodies and a diary. All of these discoveries have to do with the Masterson massacre that happened years ago. Eventually, David starts acting strange and Kate starts seeing Masterson around the house. Randomly, a maintenance man accidentally hangs himself outside Jason’s window (he isn’t discovered for days. Days!). Kate is becoming unhinged, David is slowly transforming into the monster that Masterson eventually turned into, and young Jason is still gawking off into the distance. As we plod along with the plot, we get to the last 20 minutes of the movie, and all hell breaks loose. If you can stand the slow story that preceded these 20 minutes, you’ll be gifted with a bunch of practical effects that are just crazy. We get the cliche ’80s exploding car, bloated hanging corpses, a burnt and bubbled baseball-watching cop, a giant ‘whatever the hell it is’ lamp; and that’s just the first few minutes of the conclusion. It’s pretty awesome. It’s just a damn shame that everything before it is so damn dull.

A dull movie, however, does not mean a lifeless Blu-ray release from Arrow Video. Featuring a newly restored 2K transfer from an original 35mm interpositive element, the results are phenomenal. I know we like to throw around these words all the time, but honestly, the film does look fantastic. There are a couple areas where it’s a bit soft. The steamy shower scene, in particular, didn’t look the best, but those inconsistent parts are few and far apart. Arrow’s included booklet reports this on the transfer:

Scared Stiff has been exclusively restored by Arrow Films and is presented in its original aspect ratio of 1.85:1 with mono audio. An original 35mm interpositive element was scanned in 2K resolution on a Lasergraphics Director at EFilm, Burbank. The film was graded on Digital Vision’s Nucoda Film Master and restored at R3Store Studios in London. The mono mix was remastered from the original mag reels at Deluxe Audio Services.

Audio is presented in LPCM Mono, and just like the video, the results are excellent. I didn’t hear any issues popping up such as hissing or, well, popping. Extra features include a 34-minute sit down with a bunch of the cast and crew and it’s an entertaining experience as they reminisce about the movie. They do go into the special effects work which is a bonus, as that’s the best stuff in the film. Also included is a self-shot interview with Composer Billy Barber. It runs roughly 6-minutes. Next up is an audio commentary with Director Richard Friedman and Writer Don Bacaner, a theatrical trailer in HD, and finally a Still Gallery which runs 6-minutes.

Scared Stiff is the quintessential obscure ’80s horror film. It’s a rather dull film but is saved for the most part by an ending that is littered with a lot of great practical effects. Sure, the entire premise is nonsensical, but it’s that ending that really makes the movie worth checking out. Like a broken record, Arrow Video knocks out another great Blu-ray release, with excellent audio, video transfer and some fun extra features.