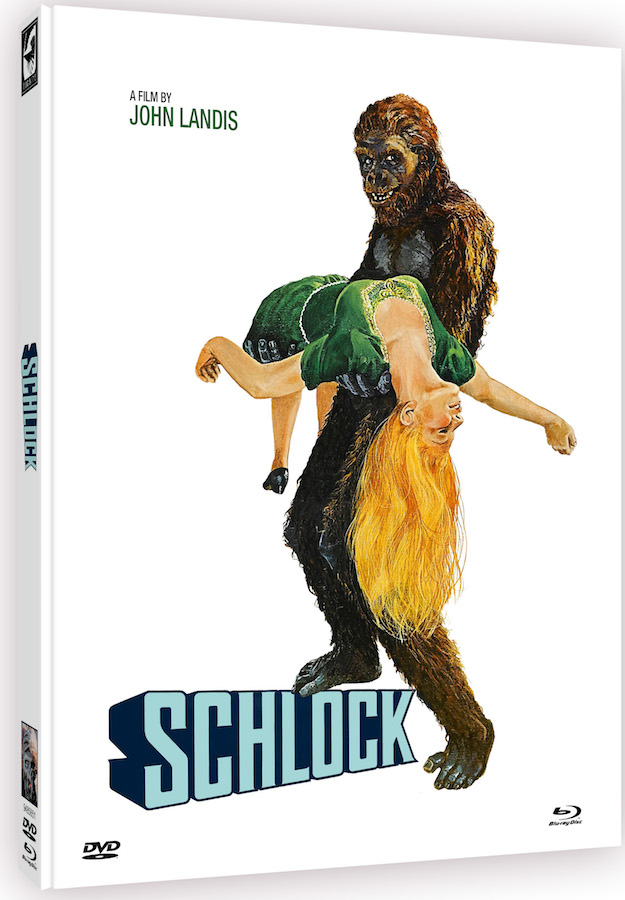 Schlock Blu-ray Review (Turbine Media Group)
While Schlock has certainly achieved cult status because of its components (Landis, Baker), it suffers from a directionless plot and only a marginally funny script. Turbine Media Group have done a great job with this Blu-ray though, featuring an excellent transfer and a number of extra features.
Film
Blu-ray
Reader Rating0 Votes
3.9

A killer ape has been spotted around town, murdering people and leaving banana peels in his wake. He’s known as the Schlock, the apparent missing link between man and ape. Schlock falls for Mindy, a blind girl, but she thinks he’s a dog until she regains her vision. Then, obviously, it becomes a King Kong-esque adventure as Schlock tries to kidnap Mindy to be his bride.

Schlock is John Landis’ first film, and perhaps his worst film, and so the title is quite apt. The movie, made in 1973 on a paltry budget, features a number of elements that would eventually become something better than this initial offering: Rick Baker, special effects artist, contributes some makeup work on the ape in this film, and he’d go on to do some great work with Landis and others; Eliza Roberts, as main star Mindy, would get a lot more to do later in her acting career including Landis’ own Animal House; and gags started in this debut would continue to run throughout Landis productions. And it’s important to take a retrospective look at the first offerings of compelling directors for contextual evidence of how far they’ve come from their beginnings. Thus, Landis’ new Blu-ray release of Schlock is sort of an ode to his prior output and a laugh at a blossoming filmmaker trying to make it in cinema.

Schlock‘s main conceit is basically a parody of dinosaur, ape, and other creature features of the ’50s and ’60s. It’s part King Kong, part 2001: A Space Odyssey, and a whole lot of parody of the sci-fi genre. Landis is clearly influenced by those films, and he pays reverence to them throughout Schlock, sometimes even stealing whole sequences from the original in order to riff on its ideas. Landis even plays the titular ape in costume, and he sports some surprisingly good makeup effects to boot. As a satire of the aforementioned films, Landis does a good job of mimicking them; but Schlock‘s issue is that it’s often not interesting enough to carry that subject matter.

Landis’ direction is slow and the story borders on tedious; in fact, there’s barely a plot at all. Schlock goes around killing people and then falls for the lovely Mindy (Eliza Roberts) in a weird mix-up since, when she’s blind, Mindy mistakes him for a dog. Other than that, Schlock meanders all over the place from quirky dialogue to news reports. Ultimately, these are time wasters – Landis’ script has a few puns in the vein of Airplane! or a Mel Brooks picture, but it’s not funny enough to drive the film and it just doesn’t have enough going on within the film to sustain even the shortened 80 minute running time.

Schlock isn’t a great film, and by all accounts Landis recognizes that. The Blu-ray restoration boom has generated such an interest in resurrecting old films that it has led to an interesting tradition: bringing back films that might not deserve it as historical landmarks from directors who have done much better throughout the years. That’s exactly how Schlock should be viewed: the origin story of Landis’ career.

Not too much, most of it done in a playful and cartoony way. Death is shown, but it’s never meant to be grim or disturbing.

Note: this was released as an exclusive mediabook Blu-ray/DVD combo pack by Turbine Media Group. I did not have the full package available to me for review, so I cannot comment on the included booklet or packaging of the release.

Turbine Media Group have worked with the supervision of John Landis on the new Blu-ray scan of Schlock and I think everyone will be impressed with the transfer of the film. Despite a few high-grain moments, the film looks very crisp and clean with very little damage or debris. Colors and contrast are well-represented and despite the age of the film, the quality of the video is excellent. This may be the best Schlock looks.

Because this is a German release, the disc immediately gives viewers the choice of either German or English for the menus. Once into that setting, viewers can still choose to view the film with an English DTS-HD MA 2.0 audio track or a German DTS-HD MA 2.0 track. Both of them sound good, and surprisingly some of the German dialogue seems a bit more pronounced. Still, no real issues with the audio. Viewers also have the option of applying English subtitles, German subtitles, or German dubtitles.

The Blu-ray disc of Schlock includes a quick introduction to the film by John Landis. Once in the extra features area, viewers will find a new 41 minute interview with Landis where he answers all kinds of questions including how he got his start, what impact Schlock had on his career, the influences that led to its creation, and more. This interview goes into a lot more than just Schlock and is recommended viewing.

Audio commentary from John Landis and Rick Baker, taken from a 2001 Anchor Bay DVD release of the film, is included as optional listening. A Trailers from Hell segment with Landis takes a look at the ridiculous The Banana Monster trailer. There are also a number of US and German trailers include. As I stated previously, the mediabook also comes with bilingual booklet but I do not have that in my possession to comment on.