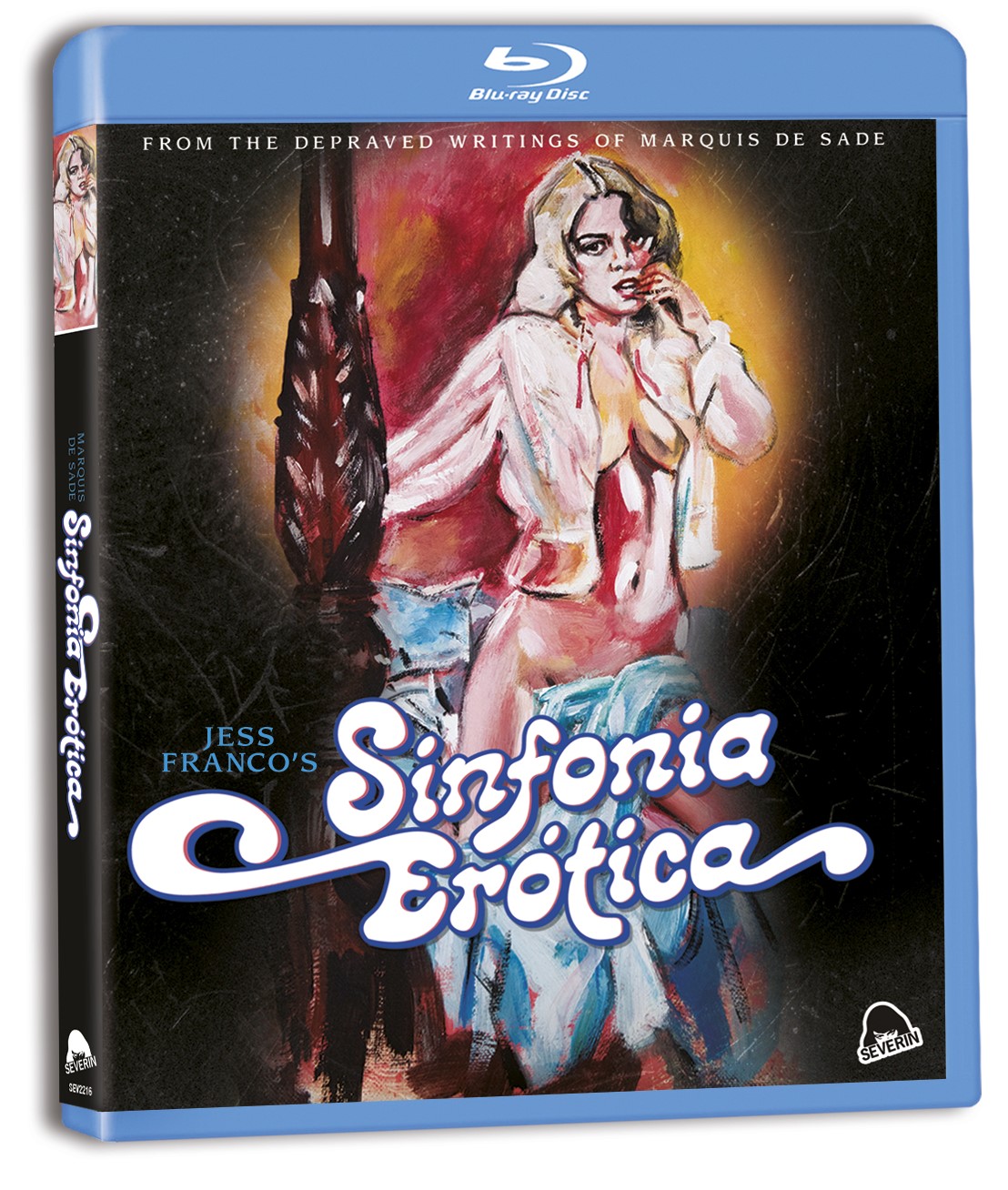 Sinfonia Erotica Blu-ray Review (Severin Films)
Franco's Sinfonia Erotica is certainly unique, though it does suffer from a lack of direction and too much focus on the sex rather than the plot. Severin Films has done a great job with the new transfer and they've assembled a couple of new extras to make this even more worthwhile.
Film
Blu-ray
Reader Rating0 Votes
3.8
Buy
Amazon

Based on the writings of the Marquis de Sade, Jess Franco’s Sinfonia Erotica follows Martine de Bressac, a well-off woman who resumes living with her husband Marques Armando de Bressac after a brief stint in a mental institution. When she returns home, Martine is plagued with her husband’s infidelity, both with a man and with a kidnapped nun named Norma. Eventually, Norma and Armando decide that they can live off Martine’s money if they slowly drive her insane and murder her, but Martine has other plans besides being murdered in her own home.

Jess Franco had an obsession with the writings of the Marquis de Sade; that much is clear from the numerous films he produced and directed centered around de Sade’s, even though some of them took extensive liberties with the storylines. He often added his own vision to these films, and much of the time they devolved into featuring beautiful people naked on camera in various forms of sexual promiscuity. Enter 1980’s Sinfonia Erotica, a loose adaptation of a story from Justine by de Sade, from which Franco had cribbed previously. The film follows Martine de Bressac (Lina Romay) in a sordid series of sexual encounters, often performed around Martine rather than involving her. In its 80 minute running time, Sinfonia Erotica features lots of sex and a very slight plot about planning murder, but ultimately what defines Franco’s film is his flair for writing smut rather than story.

Sinfonia Erotica contains an intriguing premise about infidelity, especially when it comes to Martine as a character; she’s weak-willed and often seemingly ashamed of her own sexuality, and her mental fragility stems from a clearly abusive psychological relationship with Armando de Bressac (Armando Borges). Similarly, Armando is compelling despite being a bit too mysterious – his motivations are often cloudy at best, and Franco doesn’t do a great job of pinpointing his psychological state besides painting him as something of a nymphomaniac. But his sexual preferences often put him at odds with Martine – purposefully, it becomes clear – and create the dichotomy in their relationship.

This comes out, too, when Armando kidnaps a nun and rapes her, basically creating a Stockholm syndrome in which Norma (Susan Hemingway) gets caught up. She falls in love, both with Armando and with Armando’s male counterpart Flor (Mel Rodrigo), creating yet another subplot about backstabbing and lust. Unfortunately, Sinfonia Erotica is never able to justify many of these moments, and Franco is forced to explain a lot of these relationship changes with expository dialogue that limits the impact of what could have been a rather compelling drama about adultery.

Still, the film does end on an effective note with Martine faking her own death, and fans of some of the twistier gialli of the time period may find some of that trademark madness afoot in the film. This means the film becomes a test of patience, with the viewer forced to put up with Franco’s sexual detours to get to the meat of the de Sadian brutality. Ultimately, Sinfonia Erotica will have a limited group of fans interested in this sort of work, but as Franco films go, this is one of his better moments, at least in terms of direction; his writing, as always, could use some work, and here he shows that despite all of his efforts to channel de Sade, he’s a long way off from the carnal intricacies of those stories.

While there’s little focus on outright violence throughout Sinfonia Erotica, the film’s conclusion does have a number of brutal encounters with a sword. The gore isn’t what audiences will be looking for, though.

Severin Films has released Sinfonia Erotica on Blu-ray for the first time with a new uncut 4k scan of the 35mm print. While the print has obviously been worn down by time, the transfer is overall quite good; there’s a heavy grain presence throughout much of it, especially in outdoor scenes and sky imagery, but the film looks, in my opinion, the best that it possibly can. There are still some damage marks here and there but Severin have done a good job with this scan and it is reminiscent of the other Franco prints they have worked on previously.

No real issues with audio – the film is presented in its original Spanish language on a mono track with English subtitles. The sound is clear – at times a bit too clear when all the lip-smacking and moaning takes place! Otherwise, though, no problems from the audio track here.

Severin Films has assembled a fairly nice package for Sinfonia Erotica. My edition came in a black Blu-ray box, and I’ve got to say that I have been enjoying the black cases despite the fact that you can’t see through them to the reversible cover art. That’s not a problem here, though, because there isn’t a reversible side. On the Blu-ray itself, Severin provides an interview with Jess Franco in Spanish about his work on Sinfonia Erotica, although it mostly devolves into talking about his various marriages; it’s an interesting watch, one that does explore the “unique” lifestyle Franco must have had as both an auteur and a slightly creepy director taking advantage of his beautiful stars.

The second, lengthier, interview is with Stephen Thrower, a staple for Severin releases at this point. Thrower documents a lot of Franco’s prior works with de Sade’s body of writing before diving into Sinfonia Erotica directly, highlighting how odd the film truly is even in Franco’s filmography. At 20 minutes, this interview is a must-watch since Thrower provides a ton of information about the film and Franco himself, and as always, he presents it in a highly entertaining and informative manner.

Ultimately, one can’t really expect any more extras from this type of release. Franco and Romay have since passed on, and Susan Hemingway has most likely distanced herself from her film works after ending her career in 1983. Severin Films has done a great job with the transfer and compiling a couple of new features, and anyone interested in collecting Franco’s works or at least seeing his de Sade output should pick this up.