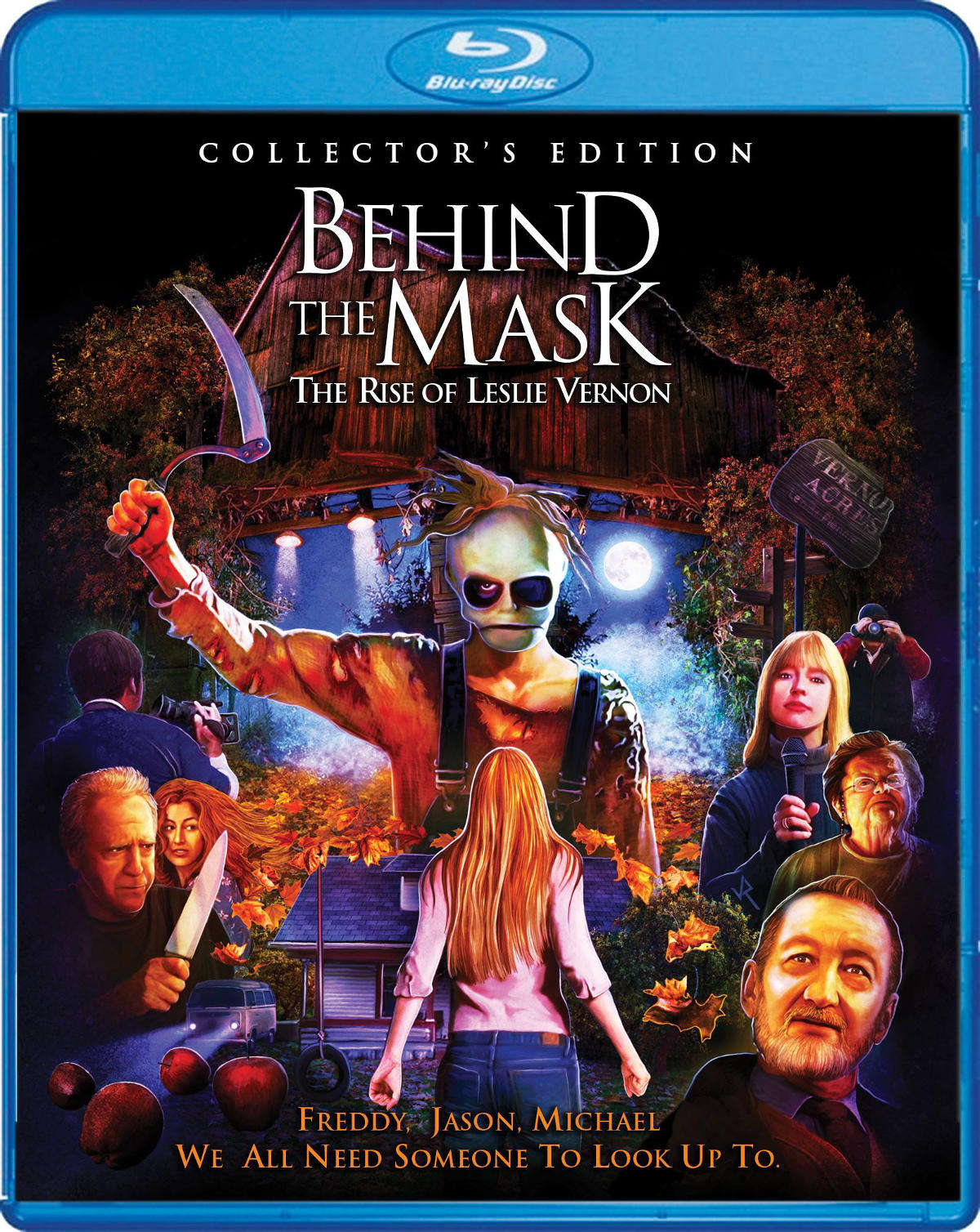 Behind the Mask: The Rise of Leslie Vernon Blu-ray Review (Scream Factory)

Behind the Mask: The Rise of Leslie Vernon Blu-ray Review (Scream Factory)
Behind the Mask is a solid slasher meta-commentary film, although it does get too caught up in its own slasher element in the final moments. Scream Factory have released a nice Collector's Edition Blu-ray containing a good transfer and a lot of old extras interspersed with a couple new ones.
Film
Blu-ray
Reader Rating1 Vote
4.4
Buy
Amazon

Taylor Gentry and her film crew are interested in capturing the next slasher killer on camera, and they know that the infamous Leslie Vernon is going to strike his small town of Glen Echo to fulfill a creepy legend that has sullied his name. The documentary hopes to capture the full spirit of the killings and Leslie is very willing to show the tricks of the trade; throughout, they plan the big day and then start the festivities for the slaughter. But Taylor won’t willingly allow Leslie to kill the nubile teens, and she tries to step in to intervene. Will she succeed, or will she become Leslie’s next victim?

Behind the Mask: The Rise of Leslie Vernon is a unique slasher film in much the same metacritical vein as Scream before it. Here, though, co-writer and director Scott Glosserman does not just give the characters insight into common horror movie tropes; instead, he treats the horror movie villains that we know as real people. Michael Myers, Freddy Krueger, and Jason Voorhees aren’t just fictional killers – they’re real, and their legacies live on in this film’s universe, with the characters often emphasizing the role supernaturality plays in their legends. By making these monsters real figures, Glosserman’s protagonists are then able to understand the normal workings of slasher madmen and working to find their own serial slasher.

In some ways, Behind the Mask is almost like the recent slew of true-crime documentaries purportedly getting into the minds of murderers. But Glosserman’s film is more focused on the intricacies of slasher convention itself. As Taylor and her camera crew follow Leslie Vernon on his quest to craft the ultimate slasher experience, the film begins to unravel the generic order of a slasher film. It’s almost like Vernon is a cinema historian dissecting the elements that make up genre film, except in this case, he truly plans out the pattern in intricate detail.

Glosserman and his co-writer David J. Stieve clearly understand the slasher/stalker genre, and much of Behind the Mask‘s first and second acts are a lot of fun simply because they get to pick apart the pieces of those films using Leslie Vernon as an example. Spliced between those interview portions are cuts to scenes showing how all of Vernon’s plans would take place, emphasizing the gory fun of slasher films. These portions of the film are the most interesting, not only because of the meta-commentary but also due to actor Nathan Baesel’s performance. He’s charming, energetic, and far from the stoic death machine that most slashers depict as their killers.

Once the documentary portion of the film ends, though, Behind the Mask devolves into the same type of generic slasher on which it’s trying to comment. Glosserman seems to want it both ways here, and unfortunately the slasher elements of the film are not as successful as the enjoyable lead-up. That’s not to say that Behind the Mask‘s ending is movie-breaking material; it’s simply exactly the kind of genericness that the film jokes about, with a twist that seems inevitable from the very beginning.

Still, it’s nice to see genre greats like Robert Englund and Zelda Rubinstein make appearances here, and the tongue-in-cheek humor of the movie elevates what some might consider a weak conclusion. Behind the Mask has some strong commentary and it easily breaks apart the ideas of the slasher genre – even, at times, analyzing the sexual psychology in a bit more detail than a genre film is wont to do. With a great performance from Baesel and some knowing nods to cult classics, Behind the Mask: The Rise of Leslie Vernon has appropriately become a classic in its own right, and even spawning a never-ending legend about a potential sequel.

Despite a relatively violence-free first half, Behind the Mask kicks it up a notch as Leslie Vernon’s rise begins; most of it is intentionally over-the-top, but there’s a nice moment when Leslie removes a guy’s heart with some shears.

If you’re going to do meta-commentary about recreating slasher films then you have to have nudity, and Behind the Mask delivers. There’s a gratuitous boob-groping scene and a couple of upskirt panty flashings (of course on purpose), plus a moment when our “final girl” gets it on to show that she’s not a virgin after all.

Scream Factory’s new Collector’s Edition Blu-ray release of Behind the Mask: The Rise of Leslie Vernon features a new HD scan from a 2k intermediate print. The film has previously been released on Blu-ray by Starz/Anchor Bay, and overall I would say that Scream Factory’s new transfer is a minor step up from that past release. Colors are good, clarity and textures look fine; however, because of the movie’s presentation as mostly documentary footage, there are some unwanted artifacts that are inherent in the source material. These are most often present in nighttime sequences, especially moon and sky shots or scenes where the lighting is dimmed (an interview in the Vernon house by candlelight, for instance, is noticeably grainy). That’s not really an issue here, though, because of the home video nature of the documentary, and ultimately this is a good transfer from Scream Factory.

Scream Factory gives viewers both a 5.1 and 2.0 DTS-HD Master Audio track with optional subtitles, and for the most part both of these audio tracks sound rather good. Like the video quality, the audio does waver at times, especially during walking scenes where the character may be moving away from the mic. This is a source flaw as well, and it again puts the viewer into the realism of the documentary, so I don’t really consider it an issue.

This Scream Factory Collector’s Edition ports over a lot of prior features from Behind the Mask‘s release on DVD (the other Blu-ray release had none); those include a lengthy making-of documentary that runs about 30 minutes, a casting featurette, two audio commentaries from Scott Glosserman and cast Nathan Baesel, Angela Goethals, Britain Spelling, and Ben Pace respectively, and deleted and extended scenes that were previously released.

Besides the new cover artwork featuring reversible original art (and a slipcase if you ordered early enough), Behind the Mask contains two new features. There’s a 30 minute series of interviews with Angela Goethals, Ben Pace, and co-writer David J. Stieve that looks to be shot at a convention; it’s bare bones but gets the job done, and it’s nice to get a few new interviews with the cast. Also included is a short interview with Nathan Thomas Milliner on his comic book tie-in Before the Mask, a 6-8 issue series that serves as a sequel to the film. It’s an interesting watch, and I’m glad to see Milliner getting even more publicity.

Somewhat disappointing is the lack of interviews with people like Nathan Baesel or even Scott Glosserman himself; sure, there are commentaries and prior interviews on here, but it would have been nice to get a current reaction to the film’s legacy. Still, this is a nice edition from Scream Factory that collects the best of both worlds with a new transfer, some new interviews, and all of the old stuff from the original DVD release. Fans will surely want to pick this up as the most definitive release yet.