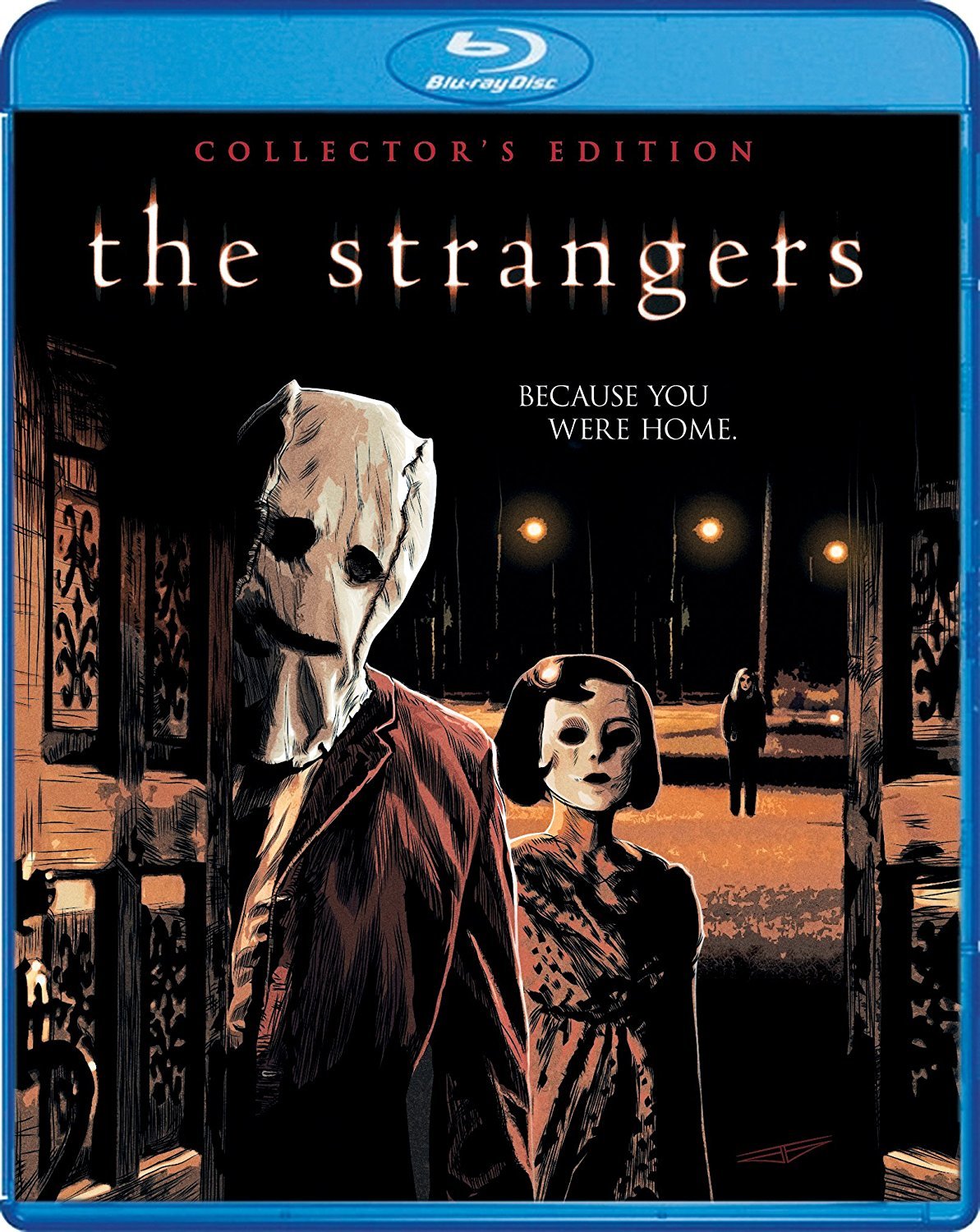 The Strangers Blu-ray Review (Scream Factory)
The Strangers can be inconsistent and sometimes frustrating, but it is a fairly good home invasion film and Scream Factory have commemorated its 10th anniversary with a great Blu-ray.
Film
Blu-ray
Reader Rating0 Votes
4.4

Kristen and James get to James’ father’s house late after an eventful party, and both of them are feeling pretty mopey. James’ proposal went south and Kristen seems fairly confused about the whole thing; still, neither of them are feeling like a party mood, and they really just want to crash by the fireplace at 4AM. However, they become the targets of a home invasion after a woman comes to their door multiple times. Soon they find out it’s not just one, but three, strangers terrorizing them in a desolate country cottage.

While inconsistent and sometimes irritating, The Strangers is a pretty good addition to the home invasion genre, and it has enough tension to elevate it above its flaws; as a 10th anniversary celebration, Scream Factory have done it right on this Blu-ray.

Bryan Bertino’s opening shots in The Strangers immediately set up a lonely atmosphere. As James (Scott Speedman) and Kristen (Liv Tyler) drive home in silence, they pass through empty city streets and wait at stoplights with no other cars; the quiet becomes palpable. Their travels bring them to a solitary house in the middle of the woods, no other lights in sight. They quietly shuffle into the house, and not even an animal can be heard in the distance.

These are great establishing sequences – for one, it’s clear that there’s no one around for James and Kristen if they need help, and James can’t even reach his friend Mike (Glenn Howerton) on his cell phone because it’s 4 o’clock in the morning. But it also conveys a sense of isolation from even the main characters, who, as a couple, have distanced themselves due to James’ not indecent but certainly unwelcome marriage proposal. The setup works well to create all kinds of tension, and it’s even more palpable if the viewer has been in a situation similar to James and Kristen’s. If not, Bertino ensures that one can imagine it regardless.

The Strangers‘ initial scares are well-paced and eerie, but Bertino understands that a slower pace will inevitably craft much scarier sequences. He allows the cat-and-mouse game to begin with subtlety: a knock at the door, then a bang, before the characters even know what’s going on. For anyone who’s lived in the lonely countryside, this is their worst nightmare: that someone malevolent comes along, and there’s no one around to help.

But Bertino makes a couple of serious mistakes in this home invasion piece. One of them is character development, especially for Tyler’s character Kristen. It’s hard to read this woman, and it’s difficult to tell if it’s the writing from Bertino or Tyler’s performance, but Kristen often seems in a perpetual state of confusion or even airheadedness. She whispers through her dialogue, often wavering between decisions or completely abandoning common sense. The whole marriage proposal seems weird too, even though it doesn’t have a huge bearing on the plot: her reaction to it feels hollow, especially for someone who seems so in love with James. Regardless, it’s really just a way to set up the ending’s attempt to lessen the bleakness of the finale.

The other flaw is certainly due to writing, because the plot moves forward solely due to character stupidity. While most horror films do take liberties with believable character actions, The Strangers feels like a comedy of errors thanks to many bad decisions made by the couple. Bertino has said that the intention was to show how stressful scenarios can make anyone panic, causing them to act inappropriately, but James and Kristen rarely use any kind of sense throughout the film. It’s especially egregious once James and Kristen find a shotgun with a decent amount of ammo; rather than constantly splitting up, it makes more sense to hide in a room (as they initially do), and wait for daylight, blasting anyone that tries to breach the entrance.

These problems are certainly frustrating, but they don’t detract significantly from the overall experience. The Strangers isn’t as smart or tense as some of its home invasion peers (and I’m confident that Funny Games will always reign supreme), but it does have some interesting elements – sound design being most prominent – and an outrageously grim ending. While the film borders on comical in its last moments, the stabbing scene is brutal and difficult to watch, and perhaps the most chilling element is when the Strangers take off their masks; at that point, death is a certainty, and James and Kristen are forced to contemplate their own violent demise. Forget the “because you were home” statement; the unmasking is the creepiest part, and Bertino was right not to show their faces.

While inconsistent and sometimes irritating, The Strangers is a pretty good addition to the home invasion genre, and it has enough tension to elevate it above its flaws. Bertino’s direction and pacing craft suspense throughout, even rivaling some of the best of the horror genre with its understated background scares. Its brutal ending will also have most people in rural locales packing up their belongings for a more populated area.

The Strangers only has three non-antagonist characters, so its violence is less significant than the tension it creates. However, it can get gory: there’s a shotgun to the face and an intimate stabbing scene that will make many squirm.

Liv Tyler gets into some underwear. Other than that, nothing.

You may realize that The Strangers was already released on Blu-ray by Universal; however, that edition only included the unrated cut of the film, and this new Collector’s Edition Blu-ray from Scream Factory, primed both for the 10th anniversary and the sequel release, is a double-disc set including both theatrical and unrated cuts. Scream Factory has also done an HD master of both cuts taken from the 2k digital intermediate, and this release looks great, especially when compared to some of the previous footage of the film that can be seen in some of the special features. Everything is crisp and detailed, with good depth in dark scenes (of which there are a lot) and no damage whatsoever. The film looks fantastic in both cuts and this new HD master is the best we’ve seen so far.

Just a note on the two cuts: the theatrical cut eliminates a couple of violent sequences and replaces with more atmosphere. There’s very little difference between the two, which makes sense since The Strangers isn’t really a violent film anyway.

Scream Factory provides both 5.1 and 2.0 DTS-HD Master Audio tracks, both of which have no flaws besides the film’s quiet dialogue. I recommend watching in 5.1, however, because of the importance sound has in the film.

The first disc contains the theatrical cut and older special features including some interviews with cast and crew and an interview with Bryan Bertino. There’s also some deleted scenes previously available which are mentioned later in the new extras, plus theatrical trailers and TV spots.

The second disc contains the unrated cut and all of the new special features. First up is an interview with Bryan Bertino that runs about a half hour, where he talks about the making of the film, his idea for the storyline, and more. It’s an enlightening interview and worth the watch. There are also interviews with two of the Strangers, Kip Weeks and Laura Margolis, in which they get into the philosophical background of their characters. This adds about another half hour to the extras. Finally, an interview with editor Kevin Greutert expands on some of the cut scenes and the reasons for those decisions. One thing I would like to see is Hutson Ranch (the makers of these extras) cut back on some of their clip inclusions – these extras tend to repeat the same clips and it adds unnecessary length to the interviews.

This disc also includes a still gallery, and Scream Factory’s Blu-ray features a slipcover (if you ordered early enough) with the new cover art as well as reversible artwork with the original, very cool poster.

Overall this is a great package and a worthwhile addition to any collector’s film shelf, and as a 10th anniversary celebration, Scream Factory have done it right on this Blu-ray.