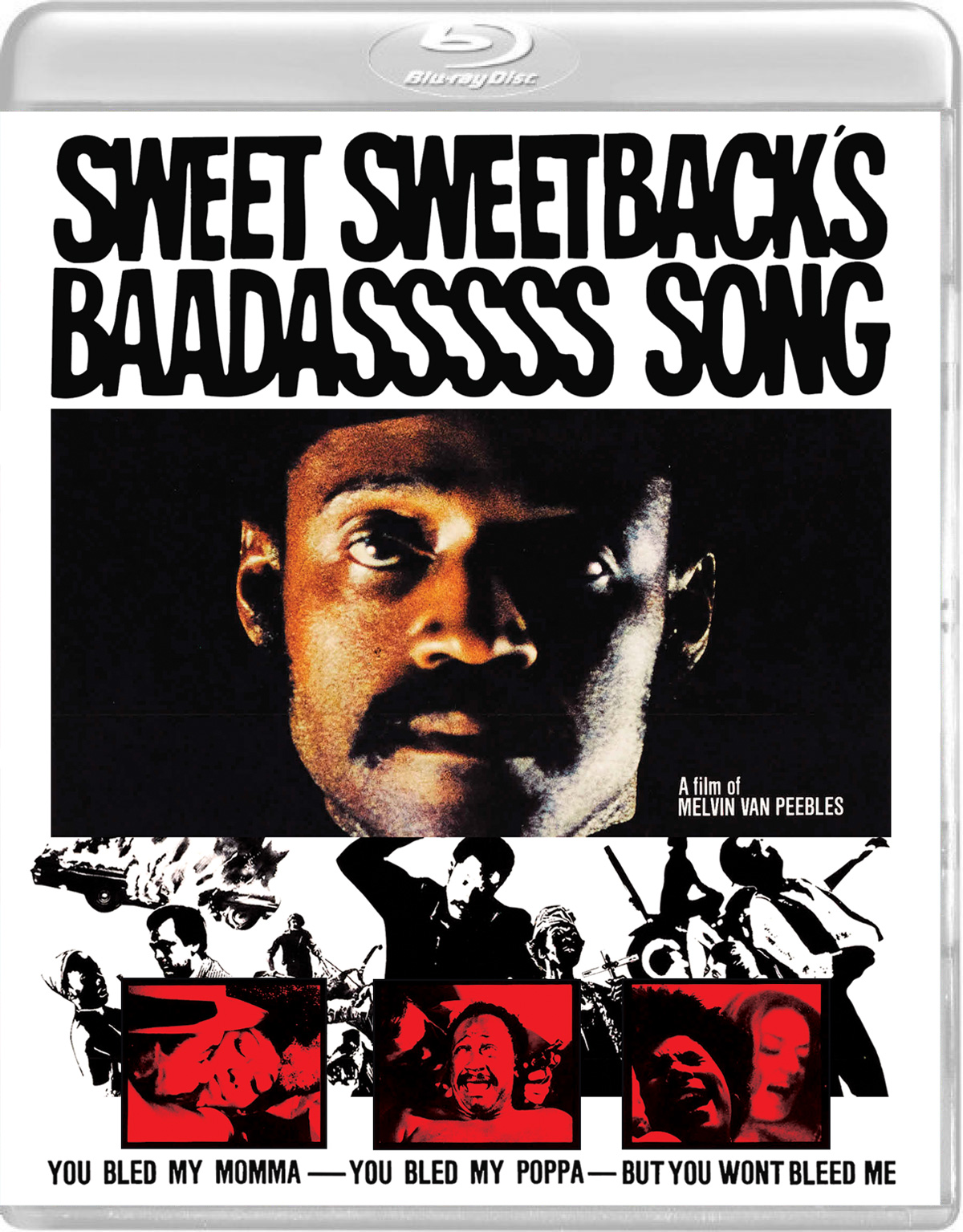 Sweetback grows up as a homeless kid in the ghettos and gets taken in by prostitutes; eventually, he becomes a male prostitute and finds himself caught up in police corruption after two officers beat up a black suspect and Sweetback comes to his rescue. From there on out, Sweetback’s on the run from the cops, and the film showcases his adventures as he tries to make it to the border.

Writer/director/producer/editor/star Melvin Van Peebles threw out all of the rules for his iconic film Sweet Sweetback’s Baadasssss Song – if you don’t believe me, just look at the title and think of the number of times I’ve had to count all of the esses for this review. The film is widely critically regarded as heralding the blaxploitation movement, because in 1971 that genre didn’t exist, at least in the form that it would take subsequently. Van Peebles’ work isn’t shy about lambasting the systemic racism in America, either; immediately, viewers are met with a blunt statement during the credits: “Dedicated to all the Brothers and Sisters who had enough of the Man.” It’s clear that the film isn’t just a commentary but an angrily pointed shaming of white America; it’s intentionally oppositional, and it certainly makes its point throughout.

Shot in a sort of surrealist vignette style, Sweet Sweetback’s Baadasssss Song follows the titular Sweetback after he grows up in the ghetto as a prostitute, beginning with a powerful and disturbing scene of the child Sweetback being raped by one of the prostitutes (played by Mario Van Peebles). This in turn sets up Sweetback’s later profession as a prostitute who basically serves as entertainment to white folks looking for some taboo fun, as is evidenced by a quick live sex scene that finds a white woman eager to partake in the festivities only to be denied that fun by police officers who put the threat of arrest in the air – it’s fine if black people prostitute themselves, but any mixed race shenanigans is absolutely prohibited.

This first 20 minutes is visually and emotionally arresting, mostly because Van Peebles’ white characters are so villainous. And Sweet Sweetback has a fluid, almost dream-like movement between set pieces and scenes; Van Peebles rarely relies on narration or even logical progression, often featuring jarring cuts in time and space that could potentially be intentional or perhaps just poor editing depending on the viewer’s openness to metaphor. Either way, Sweet Sweetback offers a unique and early blaxploitative element that sets the tone for the genre, although later films would tend to be less experimental or openly inflammatory than Van Peebles’ early cinematic gem.

But Van Peebles tends to do himself a disservice as the film moves into its later plot, since Sweet Sweetback spins its wheels once Sweetback finds himself on the run from the police after attacking a couple of white cops who beat a black suspect. The last 45 minutes are dedicated to Sweetback on the run, and here Van Peebles partakes too much in his experimental nature; the film tends to lose its goal and focus, it often borders on incoherence, and storylines are lost in the meandering. Constant film overlays featuring neon city lights or oversaturated colors craft an incongruous style that tends to damage the societal realism for which Van Peebles strives. It doesn’t help that a lot of the vignettes tend to find Sweetback literally fucking his way out of danger, something that plays out more like Van Peebles’ fantasy than a believable outcome.

Sweet Sweetback’s Baadasssss Song is undeniably important, both for the blaxploitation genre and for Earth Wind & Fire, who supply a seemingly never-ending soundtrack of jazz funk horns to which Sweetback runs. However, contemporary audiences may not find the charms in the film like those viewing it at the time, and admittedly the movie lacks the direction and technical chops to truly call it a masterpiece. It’s the contextual element of Sweet Sweetback that has cemented its place in black cinema history, and that means that watching it for entertainment may not elicit the same types of reactions. As an inflammatory statement about white privilege, though, it’s still a relevant anger attempting to fuel progression.

While I wouldn’t say that there’s a lot of graphic violence in Sweet Sweetback, what’s depicted is blatantly racist and thus disturbing in its own right. Sweetback does take a nasty bullet wound that he patches up with pissed-on mud a la another cult film classic The Chant of Jimmie Blacksmith.

There is a lot of this, both with fairly graphic sex and nudity. Lots of boobs, bush, and butt from the ladies, as well as a discomforting rape scene with a child at the beginning of the film; there’s also an elaborate sex scene with a biker lady, and more than a couple shots of boners and dong.

Vinegar Syndrome has completed a new 4k scan of this seminal work from the 35mm camera negative; a disclaimer at the beginning of the film also notes that the film’s low budget meant that some parts of the film were shot on 16mm and then upscaled to 35mm, so there are a number of scenes with what Vinegar Syndrome refers to as solarized-looking footage. The film looks quite good throughout with heavy but mostly unobtrusive grain presence and some eye-popping colors, especially the intentionally blown-out neon lighting. Occasional night scenes can be quite dark with some detail lost in the blacks, and there are a few instances of damaged film with scratches and other debris, but for the most part Sweet Sweetback‘s transfer is great and this may be the best it will look, especially with the aforementioned quirks about the filming process.

The film gets a DTS-HD Master Audio Mono track and it sounds excellent, with no popping or hissing issues, clear dialogue, and the great Earth Wind & Fire score. English subtitles are also included.

Vinegar Syndrome has released Sweet Sweetback with a Blu-ray/DVD combo set along with reversible cover artwork, and if you ordered early you could also get a special edition slipcover. But the disc itself holds a lot of goodies too, including an audio commentary with film historian Sergio Mims, a lengthy career interview with Van Peebles (about 20 minutes) in which he talks about all of his cinematic history, a 30 minute interview with Niva Ruschell on her own experiences in filmmaking along with her role in Sweet Sweetback, a 36 minute Q&A session with Van Peebles during the 2013 Black Panther Film Festival, and a 22 minute archival interview with Van Peebles that does lean more into lurid territory than most featurettes (you’ll see). A still gallery and theatrical trailer is also included.

An insert with a lengthy essay on the film by Travis Crawford completes this excellent release, quite possibly the most definitive version of Sweet Sweetback’s Baadasssss Song one can own. Check it out if you love blaxploitation.