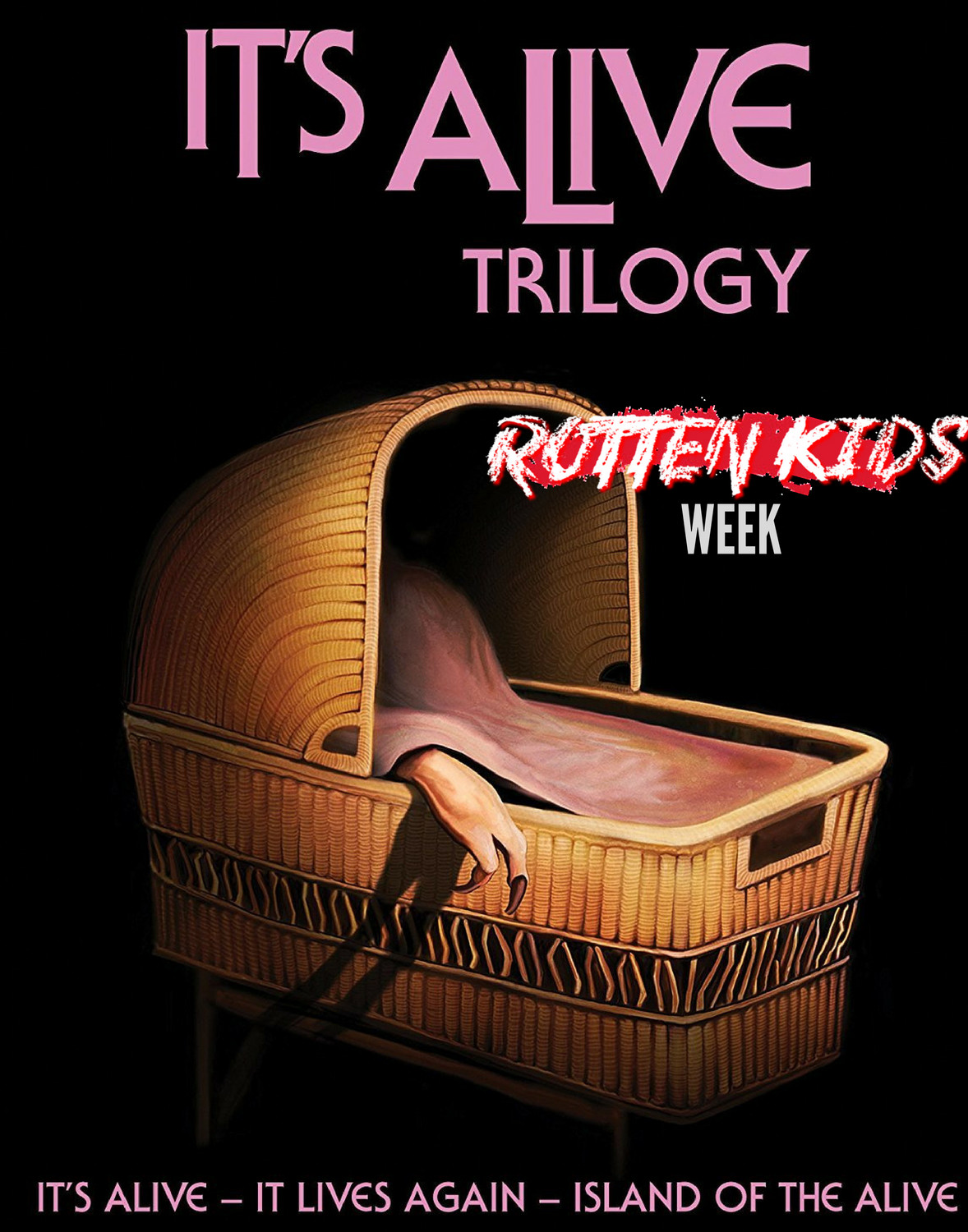 ROTTEN KIDS WEEK: It’s Alive Trilogy Blu-ray Review (Scream Factory)
The films within the It's Alive Trilogy are hit or miss depending on how accepting you are of Larry Cohen's silly plot, but one thing is definitely certain: the Blu-ray set from Scream Factory is a great representation of these films, now in one handy package.
It's Alive
It Lives Again
Island of the Alive
Blu-ray
Reader Rating0 Votes
3.7

A couple are excited to have their second child until it murders everyone involved in its birth and escapes into the city. Experiencing a ton of bad publicity, Frank must either learn to live with this evil mutation or destroy it before it can kill any other unsuspecting victims.

Yet again, another couple are excited to have their child, but Frank Davis is there to let them know that the baby is actually a mutant. However, Frank wants the child to live, as he feels like they are misunderstood. Personally, I don’t agree.

Island of the Alive

Island of the Alive sees the babies being placed on an island so they can grow up and not harm anyone. However, the film would be even more boring than it already is if that’s all it was about, so we get some people heading to the island to check on them and stuff happens.

Killer kids come in all shapes and sizes; some are influenced by their environment, some inherit their traits genetically from their parents. In Larry Cohen’s cult classic It’s Alive, the killer child is a product of both, and its impact is heightened because the violence starts directly from birth. There’s no conditioning, no option to show love to the creature – our monster literally claws his way out of the womb, killing anyone involved in extracting him from his mother. Cohen’s idea seems like it would play out like a horror comedy, but It’s Alive follows a darker, much more serious tone.

It all begins with the birth of It’s Alive‘s main antagonist; Cohen isn’t content to just show the birth itself, but the lead-up to it during the night. The proud parents Frank (John P. Ryan) and Lenore (Sharon Farrell) are clearly excited for the event, with both of them practically bounding up the hospital and beaming with joy. It’s a way for Cohen to set up some disappointment that in some ways tends to act as a metaphor for any kind of birthing complications; in this case, there’s no harm to baby or mother, but the hospital staff on the other hand will unfortunately get zipped into body bags.

There’s a satirical element to Cohen’s writing, as most of his films often contain, but It’s Alive takes things surprisingly serious with a number of tense sequences where Frank and Lenore break down psychologically. Neither of them accept the events very well, as one might imagine, but Cohen touches on two different methods of coping: Frank drinks more, gets angry, and withdraws from his life, while Lenore regresses into a type of postpartum depression that isn’t helped by her doctors literally ostracizing her from her life.

It’s Alive is a slow film and Cohen’s direction tends to become monotonous over the course of the film’s 90 minutes, but there are a number of interesting elements to It’s Alive that makes it symbolically groundbreaking. A number of scenes are quite tense thanks to their setting and Bernard Herrmann’s score, quite possibly one of the most impacting elements in the film. The other is the way that Cohen couches real-life trauma in such an absurd premise. It’s Alive‘s characters are forced to either reject their lineage or accept it even despite its differences, a position that most parents have to deal with at some point in their lives; does one reject what is in most viewpoints a disappointment and a handicap, or does one welcome that difference because as a parent they share that bond regardless? It’s a difficult question that It’s Alive poses throughout, and there’s really no happy ending to the film. Despite an adherence to a silly plot, the film’s final line does still send chills: “Another one’s been born in Seattle.”

While It’s Alive isn’t always successful and it tends to have difficulty sustaining its plot, Cohen’s satirical and somewhat pessimistic viewpoint is notable. His appreciation for leaving things unseen works very well for the film, too, since the baby is rarely showcased besides quick glimpes in dim lighting. This shares some similarities to Rosemary’s Baby, but its message is a bit different: if something’s wrong with the baby, what would you do?

Let me preface this review with the fact that I found It’s Alive to be a dull film, one that had an interesting premise that was taken seriously, but couldn’t sustain itself. My opinion differs from Ryne’s take on the flick, as he can find the good in anything. Me on the other hand, if I get bored, I tune out, and that is never a good thing. This all brings me to my review of It Lives Again, which unfortunately is as dull as the first film.

The premise behind It Lives Again brings back John P. Ryan as Frank Davis, who is going across the country and seeking out other parents who are going to give birth to the mutant babies. The government is usually always ahead of him, killing the babies before they get a chance to attack and kill anyone. Frank meets with a couple and lets them know that the government is watching them and that the life inside her is going to be one of the mutant babies. However, Frank wants to help them. He has a team of doctors who will assist in the labour and a secret headquarters where other babies are being held and studied.

Of course, it wouldn’t be It Lives Again without some mutant baby attacks, but it takes way too long to get to the good stuff. Instead, the film meanders on and on, and we the audience are waiting for the police and government to find them out and attack them. Why is it taking so long for some damn mutant babies to attack some damn people?!?

Larry Cohen’s script is undoubtedly interesting, taking the premise completely serious, but with a sequel, I was expecting some good old mutant baby attack scenes, and damn it, it takes way too freaking long to happen. I understand what Cohen is going for with It Lives Again, but how can I feel empathy for these babies when they are so easily triggered and have no issues chomping down on anyone that comes in front of them?

It Lives Again is going to make fans of the first film happy, but for me, it was more of the same, and that is not something I was looking for, and that makes me a sad “reviewer.”

Island of the Alive Film Review

After the events of It Lives Again, the mutant babies are still being born, and a legal case against them is being put up in front of a judge. This time around we are following Michael Moriarty as Stephen Jarvis, the father of one of the babies, who believes that even though the babies are deadly mutants, they should still have rights. The judge agrees and decides to send all mutant babies to a deserted island. As the babies grow up, the rules change, and Stephen leads a group of people to the island to investigate how the babies are growing up. From there everything goes off the rails and yet again, things get pretty dull.

I’m not entirely sure what the hell is going on in Island of the Alive. The script by Larry Cohen is coherent enough, but as the film slowly plods along, and Michael Moriarty’s Stephen goes unhinged for some unknown reason, we are treated to another story that tries to make the mutant babies sympathetic, but I’m not feeling it.

If I had to do my job and try to suggest some positives with Island of the Alive, I would say that there are some cool gore scenes, and some of the effects are dated but fun. Karen Black also shows up in the film as the wife (ex?) of Stephen Jarvis. Nevertheless, I am once again too bored to care enough about this flick.

It’s Alive features a 2k scan of the original film elements that looks quite good; there’s some heavy grain in the background but nothing that obscures the image, and there are few if any damage marks throughout. Even the dark lighting has been handled well as can be referenced in the subway tunnel sequence with the police car’s strobe-like red lights. Skin tone are warm and look natural. Overall a good transfer for this movie.

It Lives Again looks excellent with the new 2K scan. Nothing negative stands out, with grain present, and bits of dirt and debris, but nothing that’s distracting.

Island of the Alive also looks great with the new 2K scan. Pretty much the same as the other two, with nothing notably negative standing out.

It’s Alive gets a DTS-HD 2.0 Dual Mono audio track which sounds very good with no pops, crackles, or hisses. Depth is good and volume kept consistent, with Bernard Herrmann’s score effectively cutting through tense moments. English subtitles are also included for this movie.

It’s Alive gets the bulk of the extra features with two new interview sequences. The first is an 18 minute making-of featurette that actually incorporates discussion about all three of the film, though It’s Alive gets the bulk within the first 10 minutes. This contains interviews with Larry Cohen, James Dixon, and short snippets from others included in each of the films, and it’s definitely worth a look. Also new for this disc is a 13 minute Q&A with Larry Cohen shot at the Nuart during a 40th anniversary screening of It’s Alive. It’s a well-shot interview with some more good tibits about the film. Also included but not new to this release is an audio commentary with Larry Cohen, trailers, still gallery, and radio and TV spots. The box also comes with reversible cover artwork.

It Lives Again comes with an older commentary with Larry Cohen, a still gallery, and finally a trailer. It also contains reversible cover artwork for this film.

Island of the Alive comes with an older commentary with Larry Cohen, a new interview with Special Effects Makeup Designer Steve Neill, which runs 10 minutes, a still gallery, and finally a trailer. This box does not get reversible cover artwork, just an interior gatefold screenshot and some information on the film transfers.