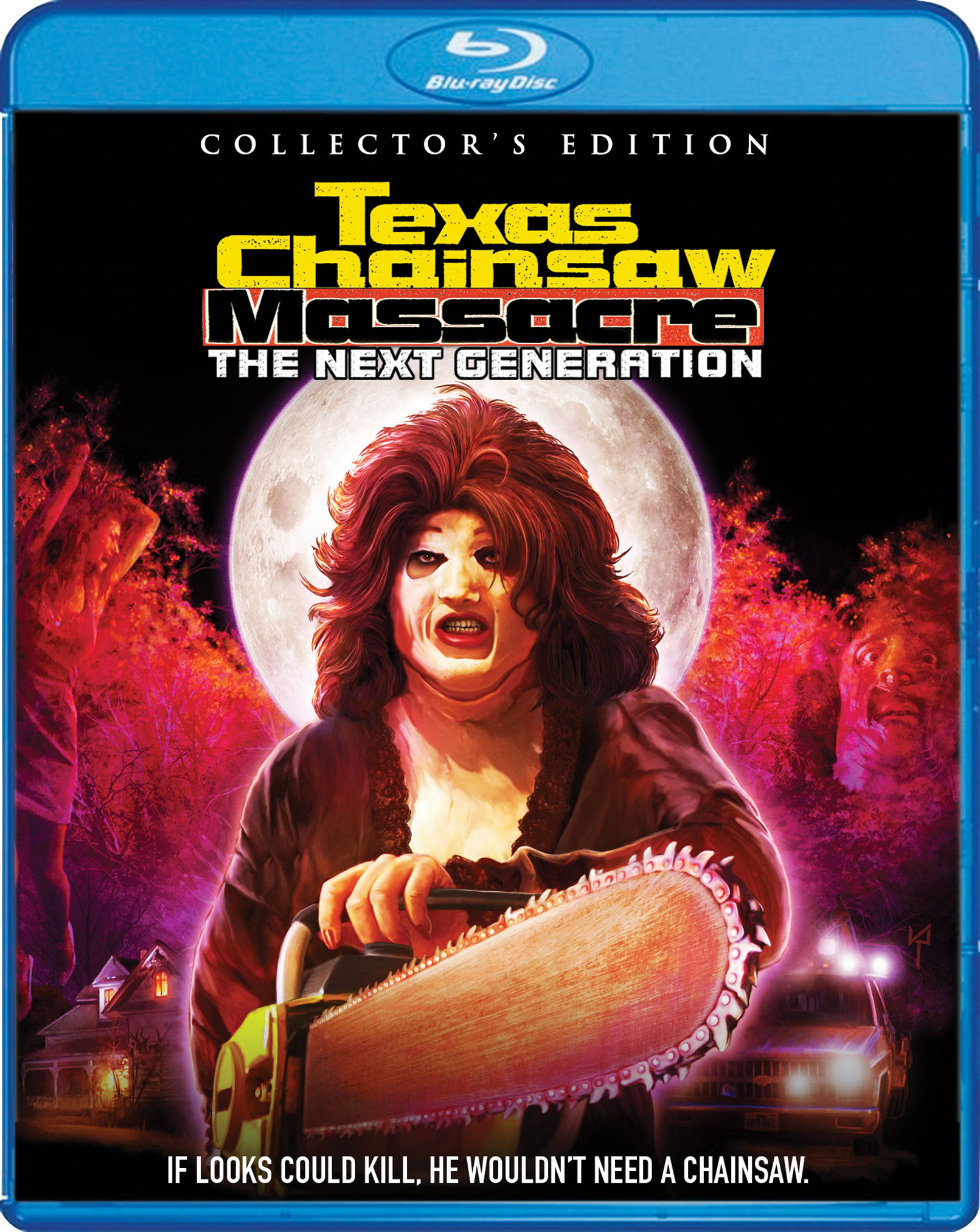 Most of everyone on the planet hates TCM: The Next Generation and most of those people have a valid opinion. However, I love this terrible movie. Scream Factory could have done a bit more on the features side, especially with them including features on the back that aren't present on the disc. Nevertheless, this is a Blu-ray worth picking up.
Film
Blu-ray
Reader Rating1 Vote
4.7

Absolutely fucking batshit insane is the best I can come up with when talking about Texas Chainsaw Massacre: The Next Generation (or the more correct name Return of the Texas Chainsaw Massacre). No matter how many times I watch this utter travesty of a flick, I can’t help but find myself enjoying it. I mean, that must say something about my mental state, right? There is no reason to like this movie, you might be saying, but oh there is I say in response. One must watch to see the talents of Matthew McConaughey and Renée Zellweger chew so much scenery there is hardly a set piece left standing. One must watch and witness pure madness in celluloid form. One must watch!

Touted as a direct sequel to the original The Texas Chain Saw Massacre, Kim Henkle, writer of the first TCM, returns to take the reins and write and direct this masterpiece. Taking place several years later, 1996 to be precise, we follow a bunch of dense prom students – Renée Zellweger being the “homely” nerd of course – as they go for a random drive into the backwoods of Texas and get in an accident. The group separate to look for help and end up running into the crazy Chainsaw clan, which now consists of an unhinged Matthew McConaughey (in what must be his most raw acting role), a quote-spouting weirdo W.E. Slaughter (Joe Stevens), a buxom and deadly beauty (Tonie Perensky), and finally a cross-dressing, and utterly scared Leatherface (Robert Jacks). As everything eventually comes to a head at the infamous house, the crazy shit hits the fan, and we get treated to 93 minutes of screaming, chainsaw buzzing, and McConaughey entering a state of psychedelic ecstasy. I assume he doesn’t remember much of what transpired when making this movie.

Seriously, folks, this movie has to be seen to be believed. It defies explanation. It exists on a plane of reality where everything is one step away from insanity. I’m not sure what Kim Henkel was smoking when he directed this movie, or what he is still smoking to be still supporting his vision. I mean, shit happens in this movie that is never explained.

For example, some weird Illuminati dude shows up out of the blue and then leaves after licking Renée Zellweger’s face. Or, how about the fact the entire fate of the main character hinges on the random kindness of a faceless airplane pilot? Don’t forget Leatherface screeching her pretty head off, swinging a chainsaw on a dusty country road while rock music blares through your speakers.

Honestly, this movie is the best damn thing I’ve ever seen.

For a movie with such a crazy history, like agents threatening to sue Sony if they promoted their client’s appearance in the film, Scream Factory had the chance to go all out and make an exceptional Collector’s Edition, but sadly that is not the case. Included on the single Blu-ray disc is the Theatrical cut and Director’s Cut. If you’re hoping for some fantastic new Cut you’ve never seen before that manages to make sense of the film, prepare to be disappointed. This cut is the same that has been available on DVD in Canada for some time. It includes a quick extra opening showing Renée’s dysfunctional family, and a few different shots, but overall the film plays out mostly the same. You should also know that the extra footage included is Standard Definition quality and the difference between the theatrical’s transfer and extended cut footage is exceptionally noticeable. Whereas the new transfer footage looks terrific, the SD footage is like a slap in the face. Seeing that not much has been added storywise, one might be wise to watch the Theatrical cut and enjoy a more solid transfer. I mean the film is already a jumbled mess, why not go all out and watch the butchered incoherent version. Audio included on both cuts is DTS-HD Master Audio 2.0, and that hour or more of screaming sure does come through loud and fucking annoyingly clear.

Now, where most of my disappointment lands with Scream Factory’s Collector’s Edition release of TCM: The Next Generation is with the extra features. We have the new audio commentary on the Director’s Cut with Kim Henkel, Joe Stevens, Brian Huberman, and moderated by Phil Nobile Jr. This was an enjoyable commentary track with a bit of interesting information provided. Kim Henkel can be heard saying both Matthew and Renée were happy with the time they spent on the film and aren’t ashamed, so he’s not sure who the angry person was back in the day. Although, we now know that maybe they do hold some resentment towards the film as they wanted their faces removed from Scream Factory’s cover. Something else that makes the commentary so delightful is hearing Kim Henkel try to explain the Illuminati subplot, but it’s clear even he isn’t entirely sure where he was going with it, let alone anyone else on the film. Nevertheless, his frustration towards having to explain himself over and over again is evident.

Next on the list are three new interview features lasting roughly 47 minutes. The first interview is approximately 12 minutes long with Director of Photography Levie Isaacks, who discusses his passion for getting into the film industry and working in Texas on the original TCM and this newer one. Next is a 16-minute interview with Tyler Shea Cone, who talks about getting started in acting with this movie playing Barry, and reminisces about making out with an actress for a scene, and getting acting lessons from actress Tonie Perensky. Last are two combined interviews with Special Makeup Effects Artist J.M. Logan and Production Designer Deborah Pastor, lasting 19 minutes long. Logan talks about getting the job and how excited he was to work on bringing Leatherface back to the big screen. Pastor discusses the production design of the house and the work that went into trying to make it look as close to the original home. She mentions one of the original chairs was used during the dinner scene for the Grandfather (you know, the old man who randomly gets up and walks off set.) And that, besides a trailer, is all there is for extra features. No Behind the scenes footage nor a Still Gallery like the back of the Blu-ray case would have you believe. We reached out to Shout Factory to find out why these two features are missing but didn’t hear back in time for press.

Once people see that I enjoy Return of the Texas Chainsaw Massacre: The Next Generation, any credibility I built up over the years has probably been thrown out the window, but come on! How can you not at least enjoy this transcendent experience in horror? Scream Factory could have done better with the features, but at least the film looks great when the SD footage is not being shown of course. It might not have enough features to justify the Collector’s Edition branding, but I’m willing to let things slide for the chance to own the BEST FILM EVER MADE! I said it folks; it’s the best film ever!