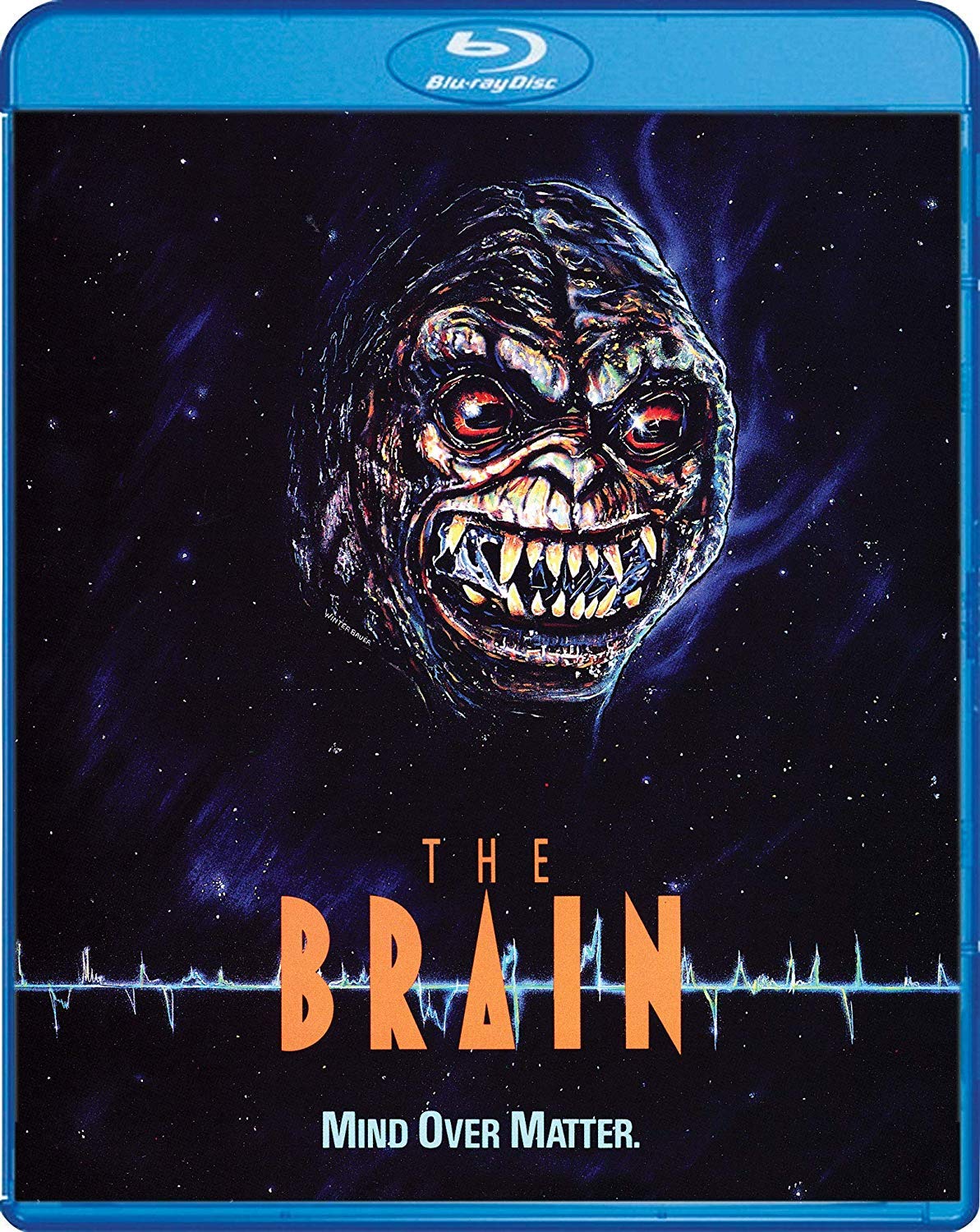 I'm simple, so simple was what I wanted when checking out The Brain for the first time. Sadly, it wasn't the crazy brain on the loose story I thought it was going to be. However, it is still a good film and the Scream Factory Blu-ray is fantastic.
Film
Blu-ray
Reader Rating1 Vote
4.3
Buy
Amazon

When I popped in my new Scream Factory Blu-ray of The Brain, I was expecting all sorts of stuff to happen. I thought I would be getting a weak 2K transfer, but instead, I got a damn excellent looking 4K transfer. I thought I would be getting man/woman eating brain mayhem, but instead, I got… well, not that exactly. My experience with The Brain was one of disappointment and enjoyment. Which outweighed the other? Read on to see, or not. I don’t care.

The story behind the ’80s horror film The Brain has a research lab run by David Gale (the mossy bank-eating head in Re-Animator) who is growing a vast, very colossal brain. The brain is used to mind control people through either direct control or through your television. The results usually end up killing the person who has been direct controlled due to hallucinations, driving them mad. One such victim is Jim (Tom Bresnahan), who after being mischievous at school, is sent to the research lab and is mind-controlled for a bit, leading to some rather lovely-looking boobs to look at and enjoy (this really doesn’t have anything to do with the plot, but tits). Jim manages to survive the hallucinations and comes upon the giant brain by accident, which has the research lab fearing he will either tell people about the brain or kill the monstrosity. In comes Verna (George Buza), who hunts him down (while killing cops with an axe and telling a different cop that has just arrived at the crime scene that Jim killed the cop with an axe, while Verna is still holding the bloody axe). From here we go on an adventure of more mind control, lots of running, and just a smidgen of brain-munching mayhem.

Okay, sure. The Brain is more relevant today than it was back in the ’80s. The TV is slowly controlling us and making us believe in all sorts of crazy, fake stuff. I mean, seriously, we would have to be insane to think that a man of zero intelligence would be put in any position of power (amirite?). This makes the plot behind The Brain work much better today than it did back then, but given the look and name of the film, I would assume most people going in would want a plot that involves a brain on the loose, killing people. Sadly, you are not getting that! You are still getting an enjoyable enough time with the movie you do get, though, which oddly enough has more than one similarity to Halloween III: Season of the Witch. Did I hate the flick? Well, no, it didn’t ruin my day, but I am a little disappointed it didn’t have the crazy horror shenanigans I was expecting. Of course, what the hell do I know?

Scream Factory has released The Brain on Blu-ray with a new 4K (or is it 2K?) scan, as Scream Factory reports 4K and the package reports 2K. Some “experts” say it’s 4K as they can see the 4k-ness in the film’s grain pixels or some shit. Whatever it is, it looks great. The film has never looked better, and if you don’t believe me, check out our carefully curated gallery (warning, boobs are included). As for the audio, we get to listen to the film in DTS-HD Master Audio Stereo, even though the menu lists it as Mono. Jesus Scream Factory, can you at least do a bit of QA in regards to the details? I’m available if you need me.

Extra Features are a bucket full with not one, not two, but three audio commentaries! I’m sure there are people out there that will want to watch the film 4 times, especially John Campopiano, who is featured on an extra titled Food For Thought: A Love Letter To The Brain, which runs 11-minutes long and has him showing off some neat memorabilia and memories of visiting the filming locations (Canada bitches!). Also included is an interview with the axe-wielding maniac George Buza, which runs about 12-minutes, and an interview with the beautiful Cynthia Preston, which runs around the 11-minute mark or so. Finally, we get a Still Gallery.

Will you like The Brain? Well, if you already have seen it and love it, you’ll be pleased to own the Blu-ray, but if you’ve never seen it, heed my warning folks! There isn’t as much brain action as I thought there was going to be. Does that help? Probably not, but I don’t get paid for this, so take my word for it or don’t. I’m out of here.

Check out our gallery of screenshots from the Blu-ray here.