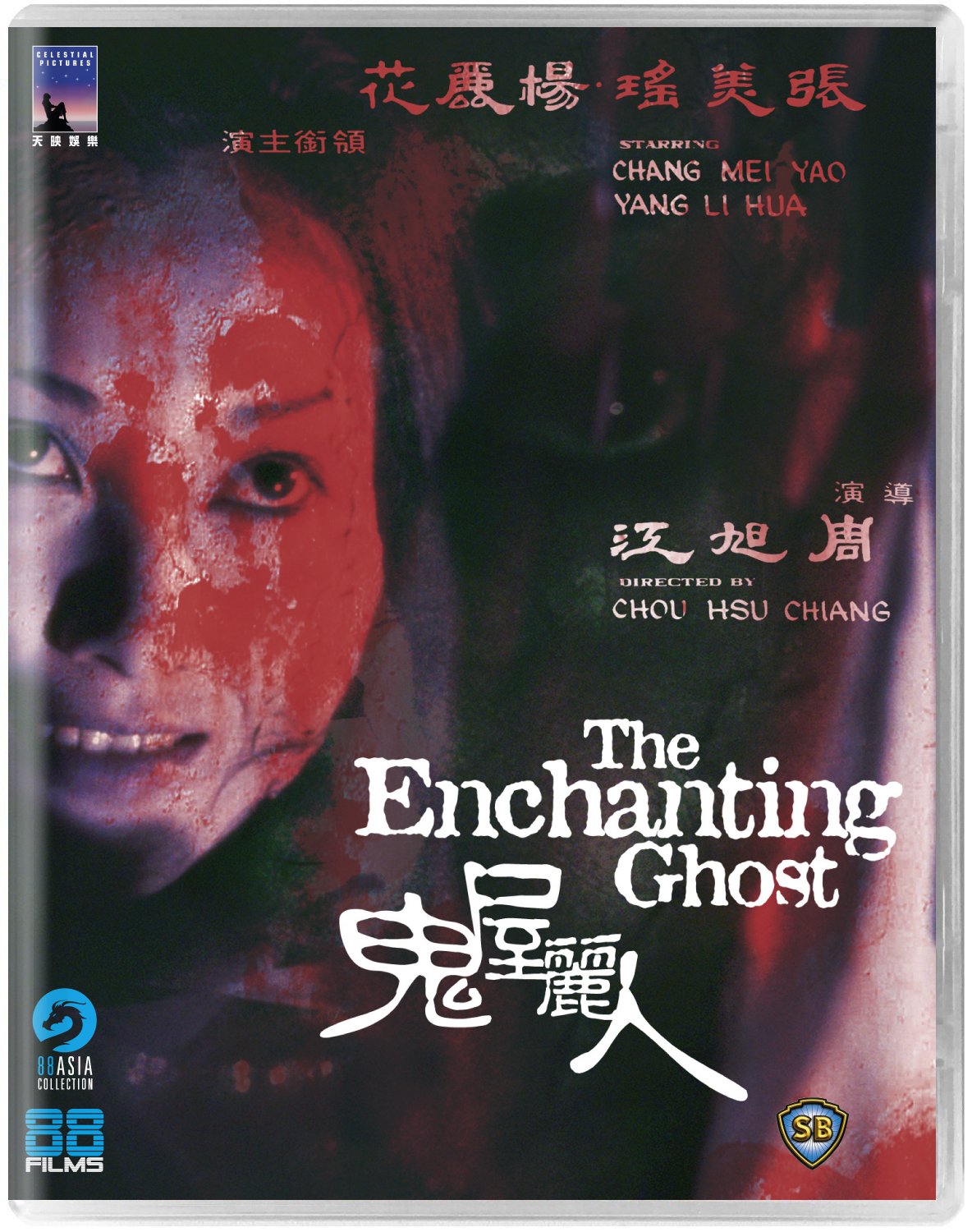 In this historical Chinese horror film, Master Lang, a scholar, is forced to take up residence in a purportedly haunted house after he’s kicked out of his family home by his uncle. There, he finds Ruyu, a homeless woman who has sought shelter in the house for her dying mother. Ruyu and Lang begin to live together and inevitably start a romance, only to have tragedy strike when one of Lang’s uncle’s friends gets a bit too lusty for Ruyu. He rapes her and his wife poisons her, leading to the titular ghosts of the film.

The movie itself is bland and unremarkable but 88 Films’ transfer and additional essay give value to this Blu-ray for those Chinese cinema fans.

The Shaw Brothers Studio made a lot of great Chinese films, including quite a few horror flicks. The Enchanting Ghost is one of their endeavors, a supernatural romance about a scholar and a young woman who end up falling in love despite living in a supposedly haunted house. While the film wears its horror element on its sleeve – or, to change around the metaphor, in its title – its ghostly element is quite far removed from much of the movie’s running time. While director Hsu Chiang Chou does work in some atmospheric moments early in the film, The Enchanting Ghost is often neither ghostly nor enchanting in its 85 minute scope despite featuring a rich look at Chinese history.

The movie’s major focus is on the romance between Lang (Li-Hua Yang) and Ruyu (Mei-Yao Chang) after a happenstance encounter in the aforementioned “haunted” house. Both of them ostracized from society in some way, their eventual love story is both predictable and also surprisingly non-sexual – and that could partially be due to Yang, who is a woman playing a man in traditional Chinese fashion, an element that is somewhat confusing for contemporary Western audiences when the film doesn’t make Lang’s gender explicitly clear in the first half hour of the film. While the conventional ideas of romance are not displayed are perhaps not necessary for the film’s themes, it does make for a rather plodding first two acts; not much happens, not even conflict, and Chou sticks to a stoic plotline wherein superstitious characters continue to worry about whether Lang’s house is actually haunted (spoiler: it’s not).

The film doesn’t really liven up until the last fifteen minutes during a quick conflict; jealous of Ruyu’s beauty, Master Shi (Ming Lei) decides to cook up an elaborate scheme to bring Ruyu home with him and rape her, forgetting that his wife and concubine will probably be pretty mad about this scenario. The Enchanting Ghost has an interesting, and perhaps unintentional, dialogue about femininity in this period of China; all of the women tend to be stronger characters than the men, those men often being distracted by their own self-interests. It doesn’t add much entertainment to this slow affair, but it does at least offer something to watch for in between scenes of Lang yelling, “Ruyu!” into the dark.

The Enchanting Ghost‘s conclusion does at least feature ghosts, a sort of Scooby-Doo gag affair wherein multiple ghost women chase Master Shi around waggling their lengthy fingernails at him (the intent being, I guess, that ghosts grow gross claws). It’s not the horror of something like Hausu years later, but it does at least provide a bit of variation to an otherwise stagnantly-paced film.

Unfortunately, this Shaw Brothers film lacks a strong plot. Perhaps some of the film’s value is lost in cultural differences; it may be a bit more interesting to those who know the historical context in which the movie takes place. But most audiences, I fear, will find the prospect of sleep more enchanting than the ghosts in the film.

There’s not too much, but vibrant splashes of blood here and there do add some technicolor to this work. There are a couple of sword stabbings and a bleeding head wound.

None – unless the flash of an undergarment strap titillates you.

88 Films has done a great job on the 1080p transfer for The Enchanting Ghost; the film looks vibrant, with crystal clear image and no damage to speak of. I don’t think that another version of the film is widely available on Blu-ray, so for Asian horror collectors, it’s really a treat to see the film look this good.

The film gets an LPCM 2.0 audio track that sounds great, and the score is fairly important due to the dynamic orchestral elements in the film especially near the end as well as the audio effects used to add a horror atmosphere during haunted house scenes. Certainly a good offering, and there are English subtitles available so viewers can understand the Mandarin dialogue.

The package comes with a slipcover featuring the original film artwork as well as a cover with more contemporary artwork that can also be reversed to display the original film artwork. There is a pull-out essay written by Lingge Donge detailing the historical elements of The Enchanting Ghost that is certainly worth a read to understand a bit more of the film’s context. Other than that, this is a sparse package.

It’s difficult for me to recommend The Enchanting Ghost to anyone other than those die-hard fans of Shaw Brothers films. The movie itself is bland and unremarkable, making it a hard sell for most viewers. While the package doesn’t have much in the way of extras, 88 Films’ transfer and additional essay give value to this Blu-ray for those aforementioned Chinese cinema fans.