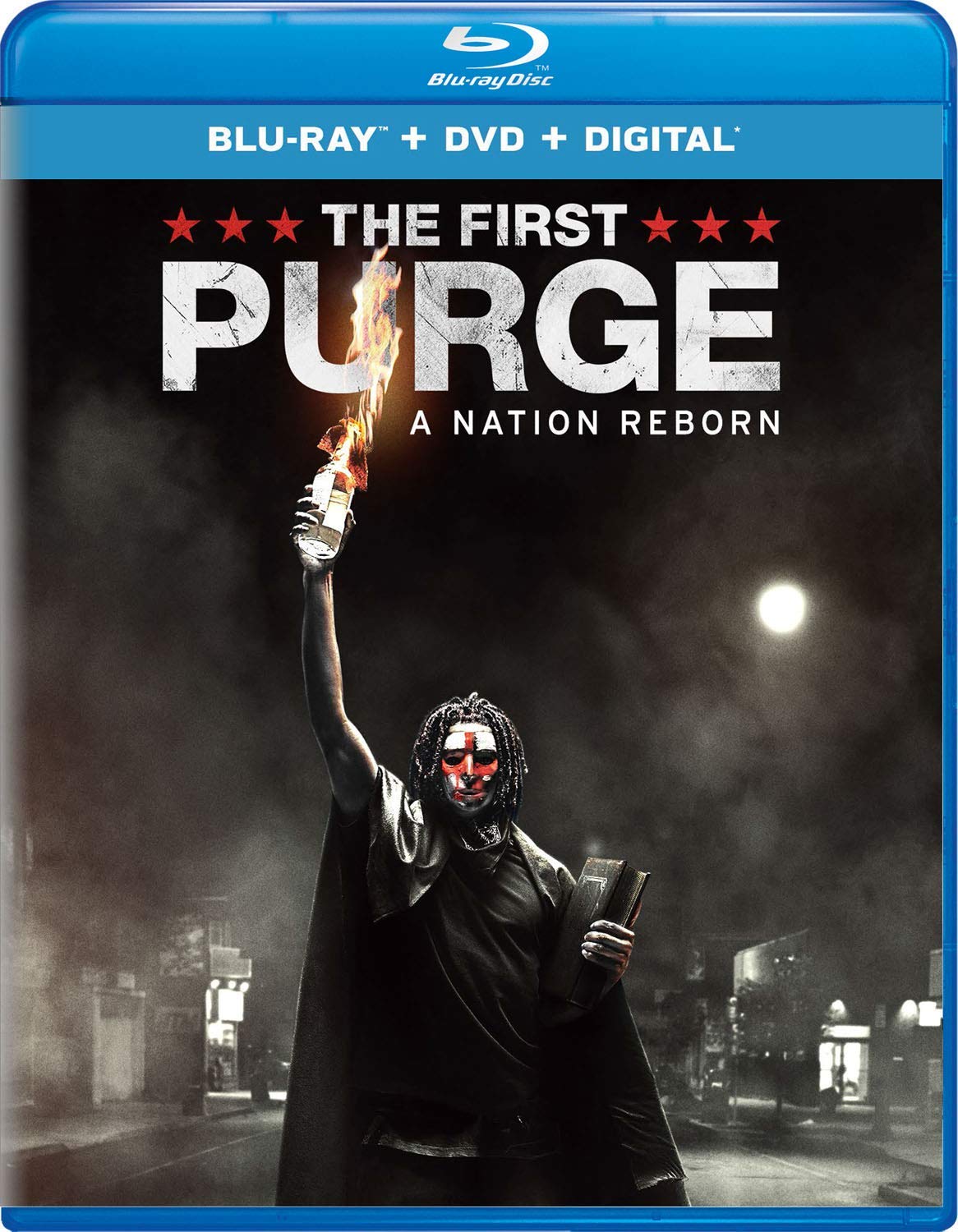 The First Purge is a fairly good film but its themes are too outspoken for its own good and realism falters towards the end of the movie. Universal Studios' Blu-ray is great but don't expect a lot of bonus content.
Film
Blu-ray
Reader Rating0 Votes
4.2

Leave it to James DeMonaco to make it a linguistic chore to talk about The First Purge. No, I don’t mean the first Purge film, it’s literally The First Purge – a prequel story to the series that explores the makings of this yearly national holiday and the political reasons behind the NFFA’s encouragement of violence. DeMonaco pushes the home invasion violence of the original away in favor of an action-packed conversation piece about systemic racism in government, with a primarily all-black cast and a person of color in the director’s chair: Gerard McMurray. This inevitably makes a statement, but the Purge’s tradition is even more repulsive.

The First Purge follows a group of people living on Staten Island as they attempt to survive the experimental initial Purge, itself designed to ensure that the cathartic violence will be seen and accepted by the rest of the public due to its success. The residents are offered $5000 just to stay through the Purge, and if they participate – wearing camera lens contacts that give everyone’s eyes an eerie blue glow – they’ll be reimbursed even more if they survive. That’s the key word, though, because the NFFA has rigged the outcome with mercenaries who storm Staten Island murdering everyone in their way, wearing some culturally taboo garb.

The premise is quite interesting, especially as McMurray explores the lives of those whom the NFFA considers “low income.” This includes Nya (Lex Scott Davis) and her brother Isaiah (Joivan Wade) living in a crappy apartment complex and Dmitri (Y’lan Noel), who has made a name for himself as a big-time gangbanger. McMurray makes it a point to start The First Purge before the inevitable shit hits the fan in order to characterize and juxtapose these players; Nya, having dated Dmitri before, has gotten out of that rough violent lifestyle, while her brother is getting wrapped up in it. Dmitri doesn’t trust the Purge simply because the regular public is unpredictable when it comes to violence, a lifestyle to which he has become quite accustomed. McMurray’s goal is to navigate the two territories to show how a life of violence isn’t the end goal, but pacifism and equality for all.

All of that comes, of course, with some gruesome violence at the hands of people who revel in the Purge’s legality. Skeletor (Rotimi Paul) in particular is the main perpetrator, an unhinged guy who isn’t practicing catharsis so much as taking advantage of a near-apocalyptic situation. And even when the residents of Staten Island tend to loot instead of maim, the government has a plan to ensure that the Purge is a success by taking out the trash, mostly with white men dressed as Klan members or blackface masks.

The First Purge is a chillingly realistic depiction of what could happen given the current political trajectory, but its main issue is that it’s a bit too blunt for its own good. It also loses its reality in ridiculous action sequences including Dmitri taking down a group of heavily-armed mercenaries single-handedly. If McMurray could have toned down the explicit themes a bit, the film might have been a bit more succcessful; as is, its too cheeky for its own good. It doesn’t take away from the power behind the message, but the message itself is watered down and far too obvious.

Still, this is a fun and violent film with a lot to say, and fans of the Purge series should find more of the things they love here. Its leading actors are solid and there are a number of eerie scenes thanks to the glowing contact lenses. It’s just too bad that the ideas are so bluntly stated; if they were less explicit, viewers would have been more open to the politics behind the plot.

Universal Studios has released The First Purge as a Blu-ray/DVD/digital combo pack, as is the norm now. The Blu-ray image looks crisp and clear with no issues, and the audio tracks offered are quite robust including a DTS:X English, DTS-HD 7.1, and Spanish and French DTS-HD 5.1 options. Also included are English, Spanish, and French subtitles, and also an English track that describes certain scenes for the deaf and hard-of-hearing.

Extras are somewhat slim but included are three very short featurettes with interviews with cast and crew about the making of the film, the special effects, and the masks in the film. Altogether these total about 15 minutes. There’s also a minute and a half deleted scene that would have changed some of the events in the film had it been left in.

This is a fairly good Blu-ray for people looking to own The First Purge for home viewing; just don’t expect a lot of bonus content.