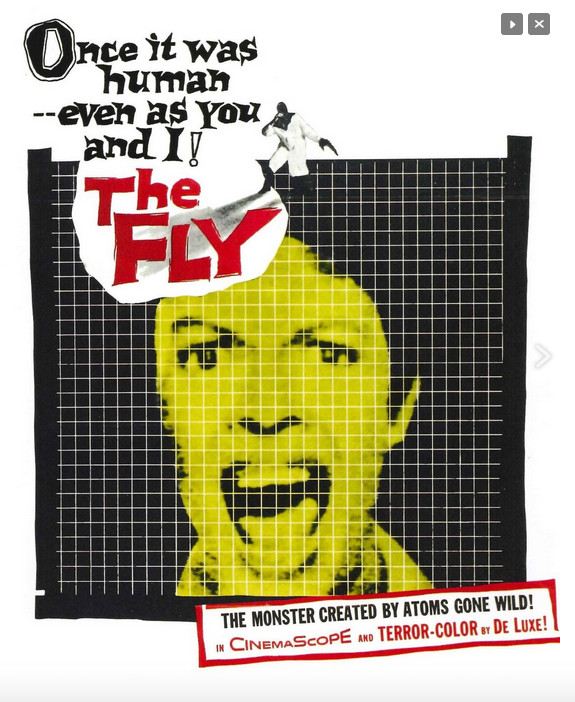 Man messing with the unknown

The Fly is a classic horror film for a reason, and its science terror still holds up as a thrilling experience. This Blu-ray in The Fly Collection is basically the 20th Century Fox release with an additional audio commentary, so viewers will need to decide if the other releases are worth double-dipping if they already own that one.
Film
Blu-ray
Reader Rating1 Vote
Good
Film is a classic
New audio commentary adds a little more value
Bad
Effectively the same disc as the previous 20th Century Fox Blu-ray release
3.5
Buy
Amazon

The Fly is part of Scream Factory’s new The Fly Collection Blu-ray box set. Because of the size of this box set we will review each release individually and then compile each review into an average box set score. Look for a complete review after we have finished each film in the collection.

Kurt Neumann’s 1958 film The Fly is a classic in its own right, a film that has inspired horror filmmaking since its release – most obviously David Cronenberg with his own take on body horror, but also many other films exploring the boundaries of science in their themes. A lot has been said over the years about the film, so we’re only going to spend a small amount of time reviewing the film properly.

Vincent Price appears here not as the mad scientist or sinister antagonist but as mere bystander Francois Delambre, who is called into a murder investigation of his brother Andre (David Hedison) that seems perpetrated by wife Helene (Patricia Owens), though the murder requires knowledge of how to work a hydraulic press. The opening minutes of the film seem to indicate The Fly will head in a murder-mystery direction, with Helene’s questioning leading to a flashback sequences wherein she tells the backstory of how everything led to her husband’s death.

Things quickly take a turn, though, once the audience finds out that Andre is a prominent scientist working on a new method of object teleportation that effectively reduces items to their individual atoms and then reassembles them elsewhere. Here, Neumann quickly defines the science behind the film’s topic without going into too much detail – and it works despite some obvious caveats later in the film when trying to understand how exactly a fly’s head can wind up on a human body and vice versa.

The Fly‘s middle portion is a little slow – Neumann spends a little too much time on mundane sequences like catching the special fly or having Owens react in shock and surprise to typewritten letters – but the movie really excels once Andre reveals his fly appendage in a particularly surprising fashion. From there, the film progresses quickly to its somewhat dark end, where Neumann reveals that the boundaries of science are sometimes not for man to explore, or at least not in a haphazard way like Andre has done. It’s a great redirection of the ’50s irradiated animal films and also those tales that focus on more outwardly mad scientists; here, neither of those elements are utilized, but one can see how the templates of those works has been redesigned for a pulpy science fiction story that is grislier than one would expect.

CHECK OUT
Extensive gallery of images from the entire Fly Collection.

The Fly buzzes its way into Scream Factory’s The Fly Collection looking almost identical to the previous 20th Century Fox Blu-ray release of the film. It contains the same transfer with the exact same bitrate as well as the same somewhat problematic menu setup and even a 20th Century Fox promo at the beginning of the disc. Likewise, it features the same previously available extras as well including an audio commentary with David Hedison and film historian David Del Valle, a biography on Vincent Price, a featurette about the film, theatrical trailer, and a Fox Movietone News clip. However, Scream does add a new audio commentary with Constantine Nasr to this disc to give some more history about the film, which buffs should appreciate.

Audio is a DTS-HD Master Audio 4.0 track, which sounds quite good except for the occasional distortion mostly when Patricia Owens screams. One change from the 20th Century Fox disc is the exclusion of multiple language tracks; this one gets rid of Spanish, French, and German tracks included on the previous UK Blu-ray, as well as those subtitles. It does include subtitles for the English track provided however.

The transfer is not bad but it does seem a bit soft in spots, which could possibly have been improved with a new scan. Part of that could be due to the coloring done by De Luxe, which tends to give the film softer pinkish hues and could explain some of the fuzzier elements that appear. Fans may not want to double-dip if they already own some of the films in this box set since they all sport pre-existing transfers, but if you don’t already have the 20th Century Fox Blu-ray, it’s all collected here.