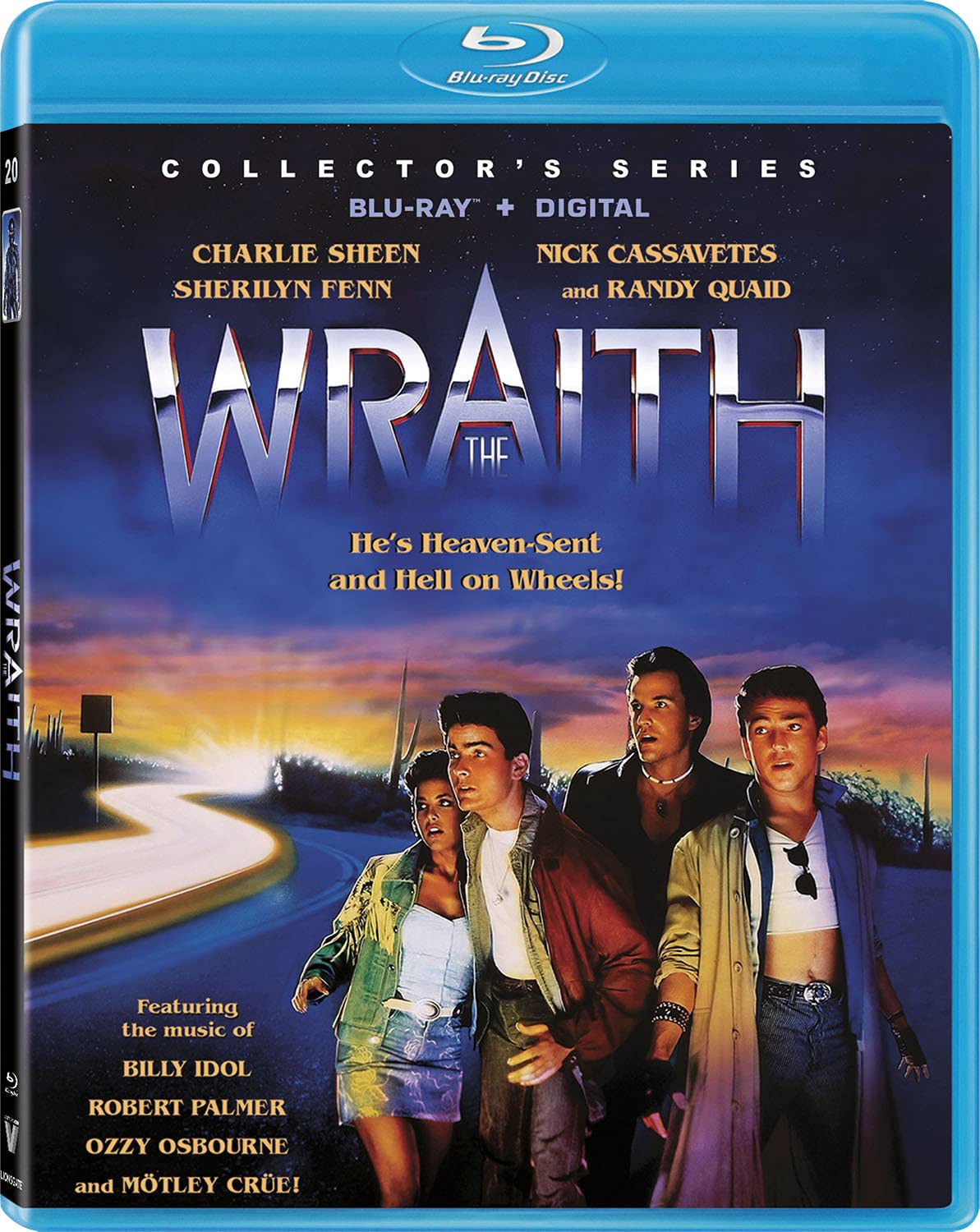 Somewhere between its release date in 1986 and now, The Wraith became a cult classic beloved by fans of bad cinema. Just check out the number of comments on Vestron Video’s Facebook page or the Blu-ray forum thread to get an indication of how many people wanted this released on Blu-ray. Our very own Basie covered it as a Cult Throwback a couple of years ago. Finally, after years of waiting, fans have The Wraith on Blu-ray as part of the Vestron Video Collector’s Series, with a “digitally restored” scan and a number of extra features… and of course Sherilynn Fenn in glorious HD quality, for those of you that might have worn out your VHS tapes pausing them during a couple of choice scenes. But is The Wraith a film worth reliving (pun intended)?

I’m going to go ahead and say a resounding “Yes!” While The Wraith is certainly “of its time,” utilizing cheesy montage sequences, roller hop burger joints, and extremely over-the-top character elements to get its themes across, it’s also a ridiculously fun film. Mike Marvin, who writes and directs, knows exactly what people want in a revenge film about the ghost of a dead speedster (Charlie Sheen) haunting the gang that killed him: high-speed car races, massive explosions for relatively no reason, inept police (Randy Quaid) handling the situation, and a romance that happens… here and there, but with some boning thrown in.

As you can see, The Wraith is not exactly nuanced, and truthfully the writing is all over the place. The film introduces Sheen’s character Jake very early in the movie, and then he disappears for about 45 minutes leaving the love story with Fenn’s character Keri in the lurch; for the audience, there’s really no other reasoning behind having Jake exist in the film except that he must be the oddly-outfitted Wraith. Once that reveal is over, though, the film can do what it does best, focusing on the vengeful acts of the Wraith as it races Packard’s (Nick Cassavetes) merry band of garage junkies literally to death. Unfortunately, one thing The Wraith‘s action moments lack is variety; the Wraith may be fast and furious, but he’s not exactly creative with his kills, and the film does get a little repetitive as it repeatedly shows the same process (and sometimes the same uninvolved cars!) of racing down dusty mountain roads before the gang member’s car explodes after ramming through the ghost Turbo Interceptor.

Marvin doesn’t explain much throughout the movie, and a lot of questions are left unanswered at the end of the film. Things like: how does the Wraith come back? Why can’t it take its original form? Why didn’t it recognize its own brother? Why do ghosts get such cool cars? How is he able to stay in the corporeal world after vengeance has been wrought? Why does it look like an alien being with advanced technology? What is God doing up there! If you’re expecting to learn more about the drag racing-afterlife, The Wraith doesn’t deliver. But it does have a ripping mid-’80s score and more boobs than you’re probably expecting from a PG-13 movie, as well as a scenery-chewing performance from Randy Quaid. What’s not to like?

The Wraith may not be a good film, but it’s a blast to watch, and it’s hard to deny the energy and heart this film exhibits even despite its many flaws. If you like supernatural love stories, racing, or the extremely cliched ’80s gang dynamic, then race to the nearest store over treacherous terrain to grab this new Blu-ray of the film.

As noted previously, Vestron Video has released The Wraith on Blu-ray with “digitally restored” in HD. This film has been available for a while on Shudder, and it did get a release on Blu-ray back in 2019 in Germany, but this is its first Blu-ray release in the United States. It’s not clear exactly what source was used for this release, but the overall image quality fares quite well. Skin tones and clothing textures are detailed. Film grain is moderately-bodied with chunkier elements in darker sequences, although for the most part The Wraith is a fairly bright film so this is minimal. There is occasional softness, but overall this is a fairly strong representation with consistent color grading and should suffice for those looking to own this physically.

The audio track provided is a DTS-HD MA 2.0 track with optional English, Spanish, and English SDH subtitles. The 2.0 stereo mix is fairly strong, with good soundtrack delineation and sharp dialogue delivery. It’s not a particularly dynamic soundtrack but no noticeable issues arise on this Blu-ray.

Quite a few extras are ported over from a previous release of this film including an audio commentary with Mike Marvin, an interview with Mike Marvin, another with Clint Howard, and stunt coordination interviews with Gary Hellerstein and Buddy Joe Hooker. New extras include an audio commentary with actors Dave Sherrill (Skank) and Jamie Bozian (Gutterboy), as well as an isolated audio score with an interview with co-composer J. Peter Robinson. Visual effects producer Peter Kuran provides a new 12 minute interview for this Blu-ray, and there is a location featurette visiting a variety of settings from the film over the span of 30 minutes.

Theatrical trailer, TV spots, the alternate title sequence including the film’s other title Interceptor, and a lengthy still gallery round out the additional features on this release. Vestron also includes a slipcover.

The Wraith is a blast from the past and Vestron Video has finally heard fans’ cries for a new Blu-ray release. While it’s not clear what kind of transfer this has gotten, the results are fairly strong and a number of new extras make this the most worthwhile physical option available to viewers. 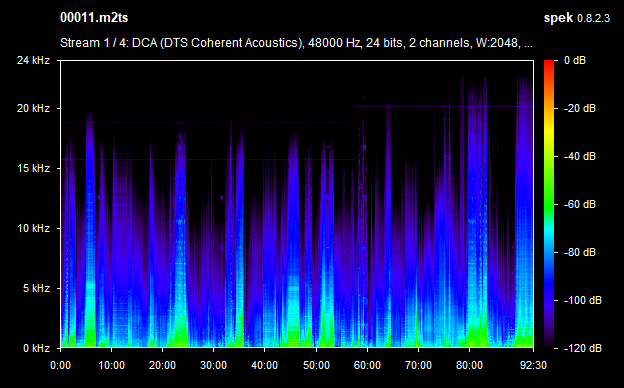 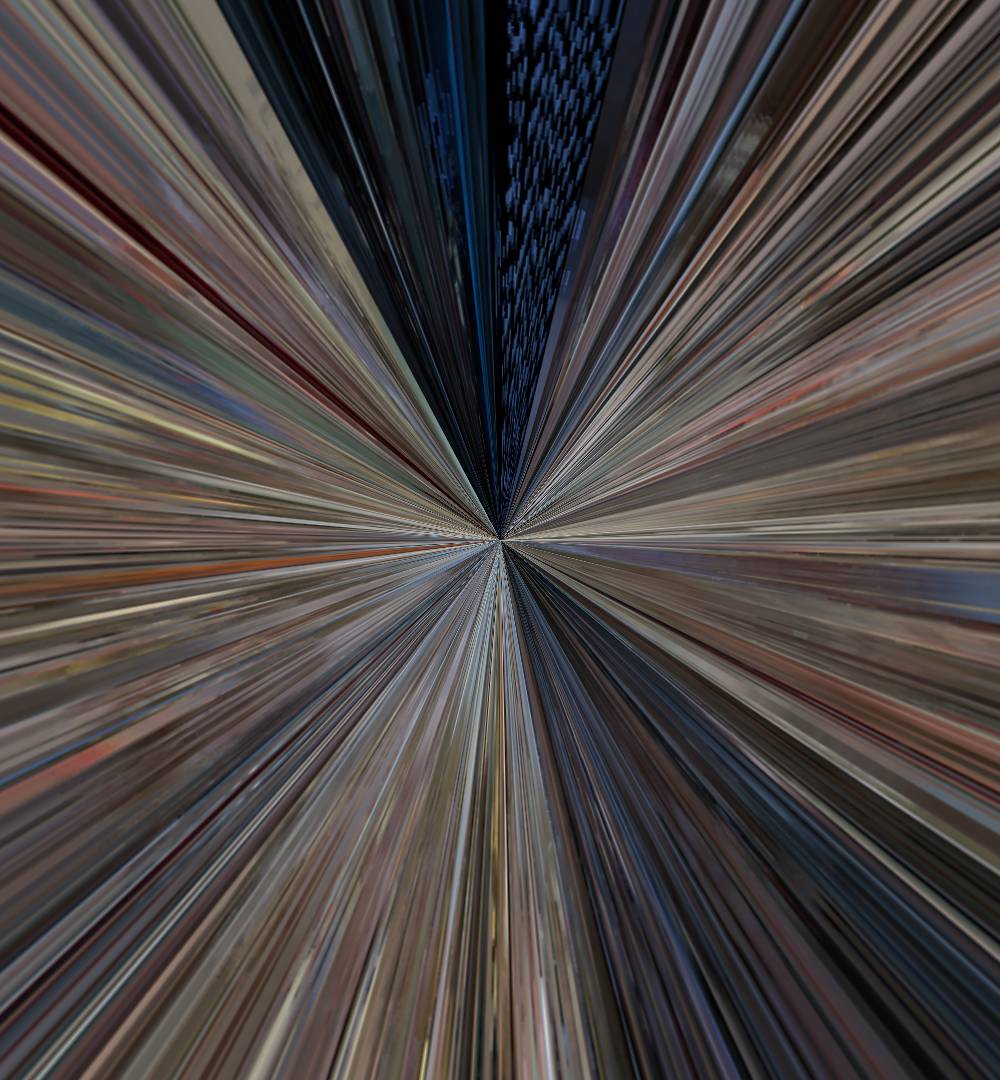 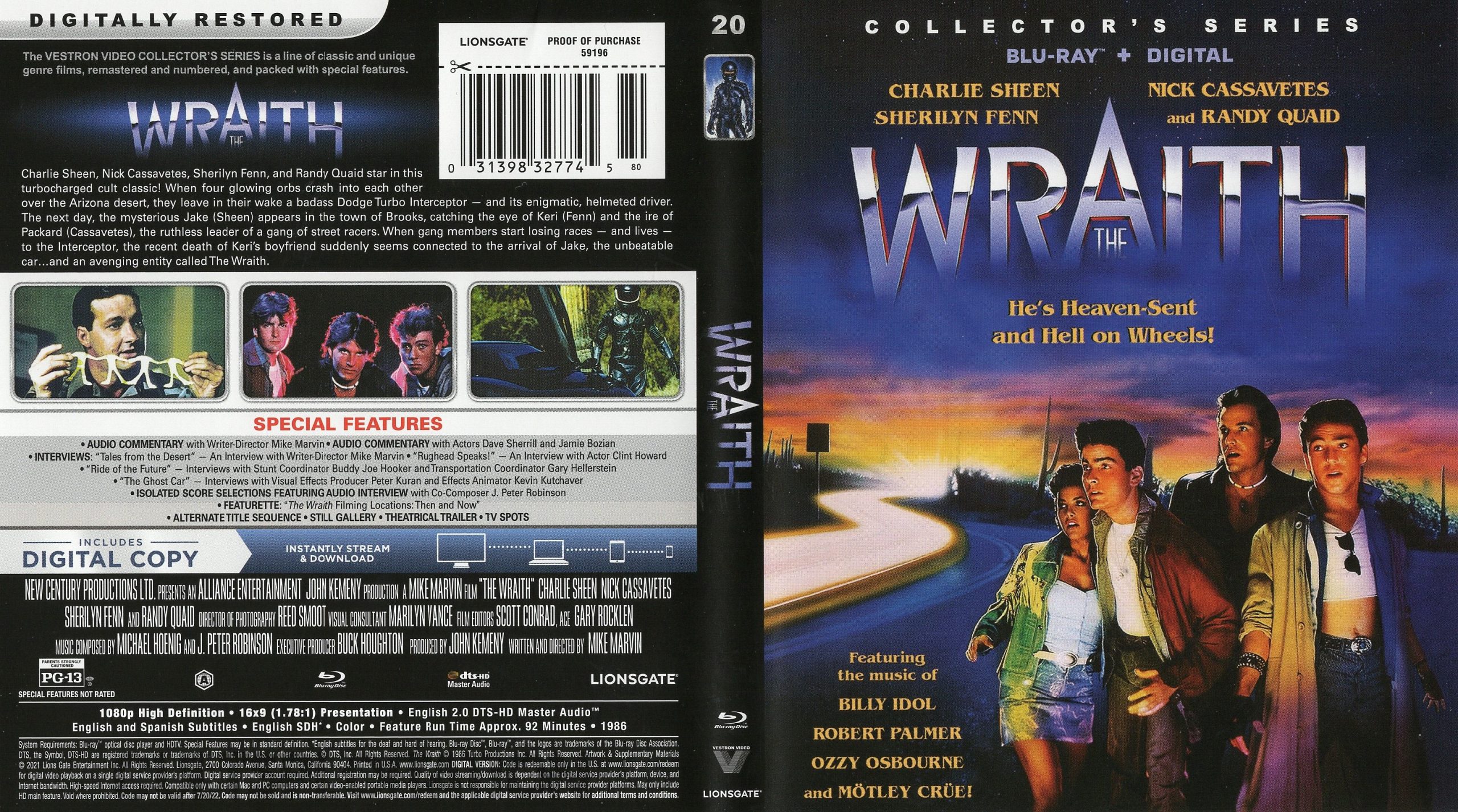 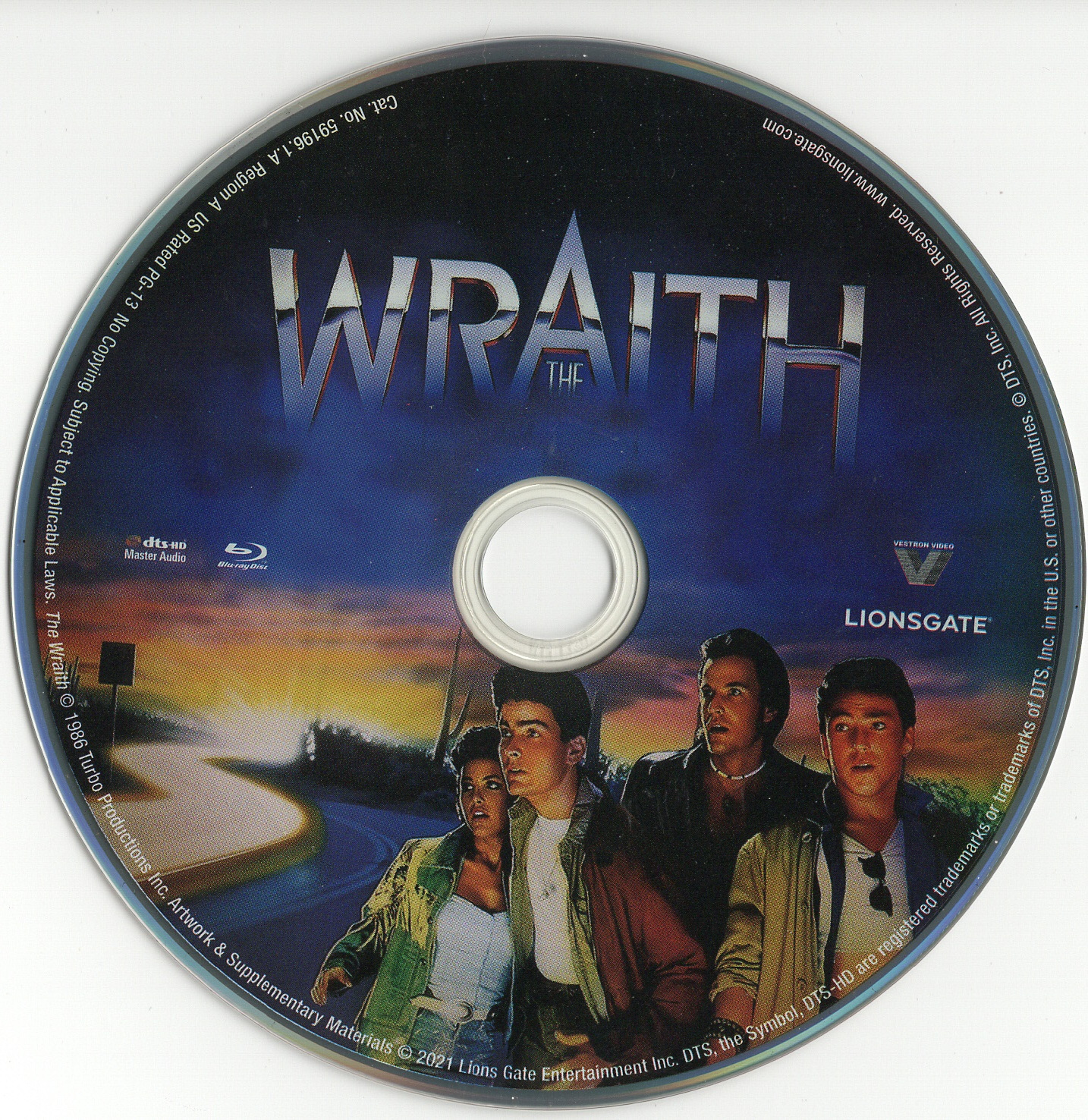