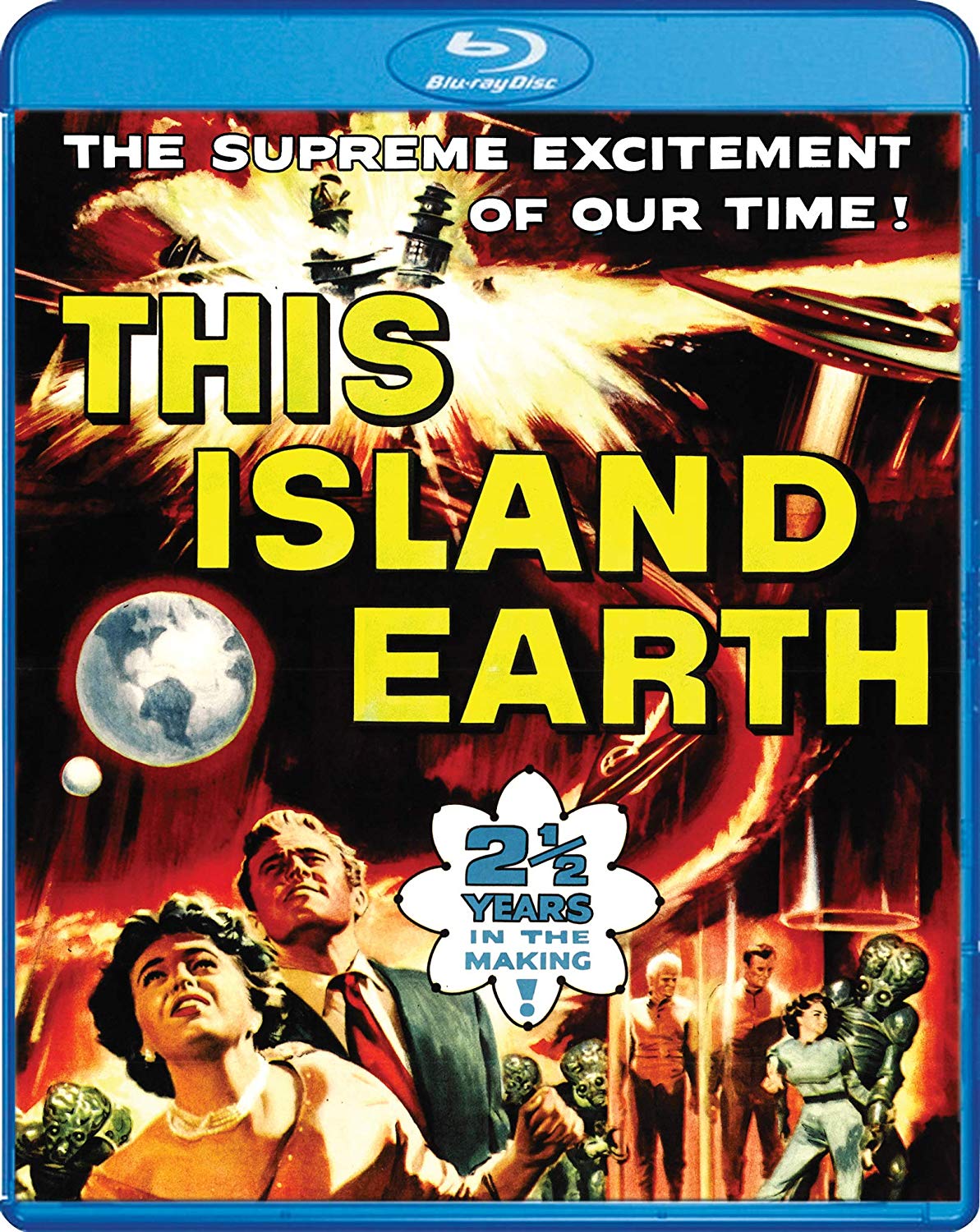 Be sure to dial in your interocitor to the correct frequency on Metaluna.

People make fun of This Island Earth all the time, but if you sit down and watch the Scream Factory Blu-ray, I think you'll begin to appreciate the film. Worthy of a purchase.
Film
Blu-ray
Reader Rating0 Votes
4
Buy
Amazon

It would be interesting to see how people were first introduced to This Island Earth. Was it the original version or was it the Mystery Science Theatre 3000 version, where they trimmed out 30 minutes of footage and did a great job making fun of the flick? Mine was the latter, and thanks to that film I always assumed that This Island Earth was a terrible movie. However, after checking out Scream Factory’s latest Blu-ray release of This Island Earth, I’m surprised to find myself thinking it wasn’t that bad.

This Island Earth is reported to have taken 2 1/2 years to complete, which the poster proudly boasts, but given my experience, long production time is never a good thing. Nevertheless, the film is hailed as one of the two best sci-fi films to come out in the fifties, with Forbidden Planet taking the top spot. The film is based on the serialized set of three novelettes by Raymond F. Jones. The movie opens on Earth, as we follow Dr. Cal Meacham, a deep baritone-voiced scientist who loves to fly dangerously and, the little I can tell from his job, blow shit up. Cal starts receiving mysterious packages from an unknown person, who gets Cal to construct a machine called an interocitor. This allows the stranger, who we come to know as Exeter, to communicate with Cal and recruit him for a special job that is meant to end all wars. Cal blindly accepts the offer and is transported to a place where other scientists have also been recruited. One of the scientists is Dr. Ruth Adams, played by Faith Domergue (random trivia: her costume was so tight she wore no underwear). Cal remembers hanging out with Ruth and proceeds to call her a sissy numerous times. Cal is kind of a misogynistic dickwad, but hey, it was the fifties.

Cal, Ruth, and disposable scientist Steve Carlson (Russell John) start to suspect something isn’t right about this setup. (It’s possible the alien-looking foreheads and stark white hair of Exeter and his assistants was the giveaway.) They look to escaping, but Exeter and his bosses have other plans and bring Cal and Ruth up into space and back to their home planet of Metalunan. A galactic war has been going on for quite some time and Exeter’s homeworld is about to die unless they can find a way to turn iron into uranium. Cue one random blue smurf scene and MU-TANT later, and the audience is treated to a weak plot, but an entertaining conclusion.

It’s plain to see why This Island Earth makes for easier fodder for comedians. The film is a random mix of made up science-y sounding words, and a weak story that doesn’t explain much to the viewer. However, given the period, I have to applaud the creators for giving viewers a fancy-looking third act. Nowadays it’s easy to make fun, but the special effects for the time were special, especially to young minds seeing the film for the first time, young minds that would eventually go on to become filmmakers themselves.

Scream Factory has gone above and beyond with this release of This Island Earth. The Blu sports a new 4K Scan of the Inter-Positive – in two aspect ratios: 1.85:1 and 1.37:1. When the film was made, they shot it open matte, but with the option to show the film in widescreen theatres, hence the two formats. Funny enough, the 1.37:1 ratio, which is available under the Bonus Menu, sports a sharper transfer. This is most likely due to the 1.85:1 aspect ratio “zoomed” to achieve the proper ratio.

The Blu-ray also contains the original Perspecta Stereophonic Sound restored by 3-D Film Archive, a fancy fifties technology that allowed films to use a directional sound system that produced a three channel surround sound in theatres. The effect is rather odd, with the actors’ voices sometimes coming from either the right or left speaker and then shifting to the centre for no reason. I’m not an expert on this older technology, so it’s hard to say whether it’s 100% correct. However, it’s certainly fun to check it out, but fair warning you need the proper setup (a discreet 5.1 sound system) to achieve the desired effect.

Moving onto the special features, we have a new audio commentary with author and Academy Award winning Visual Effects Artist Robert Skotak. An audio interview with Film Historian David Schecter, which runs over the film’s first 30-minutes and discusses the music. We have a new interview with Italian director Luigi Cozzi, which runs roughly 21-minutes. Also included is 9 minutes worth of information on Perspecta Stereophonic Sound. It’s an entirely text-based feature, displaying various articles. If you want to read them you’ll either have to be a speed reader or pause the Blu. Next, we have the 40-minute making-of titled This Island Earth – Two And A Half Years In The Making: The Extended Documentary, which was produced in 2013. Another fun feature is the Castle Films home market release of This Island Earth titled War of the Planets. It presents you two different ways of watching the film, one as a silent black and white with text subtitles, and the other with sound, but still black and white. We have a commentary from Joe Dante (one of those young minds I mentioned previously) who speaks over the film’s trailer. Completing the features is the theatrical trailer and numerous galleries.

This Island Earth has shifted from being a disastrous film that was worthy of being made fun of, to a film that is worthy of checking out due to how enjoyable it can be. Scream Factory has released a Blu-ray that packs a spaceship full of features, a fabulous 4K scan, and Perspecta sound-sound-sound! Ignore the MU-TANTS! and buy this Blu-ray.

CHECK OUT
Screenshots from this Blu-ray.
Hosting screenshots is expensive. If you want to see more galleries, consider donating!