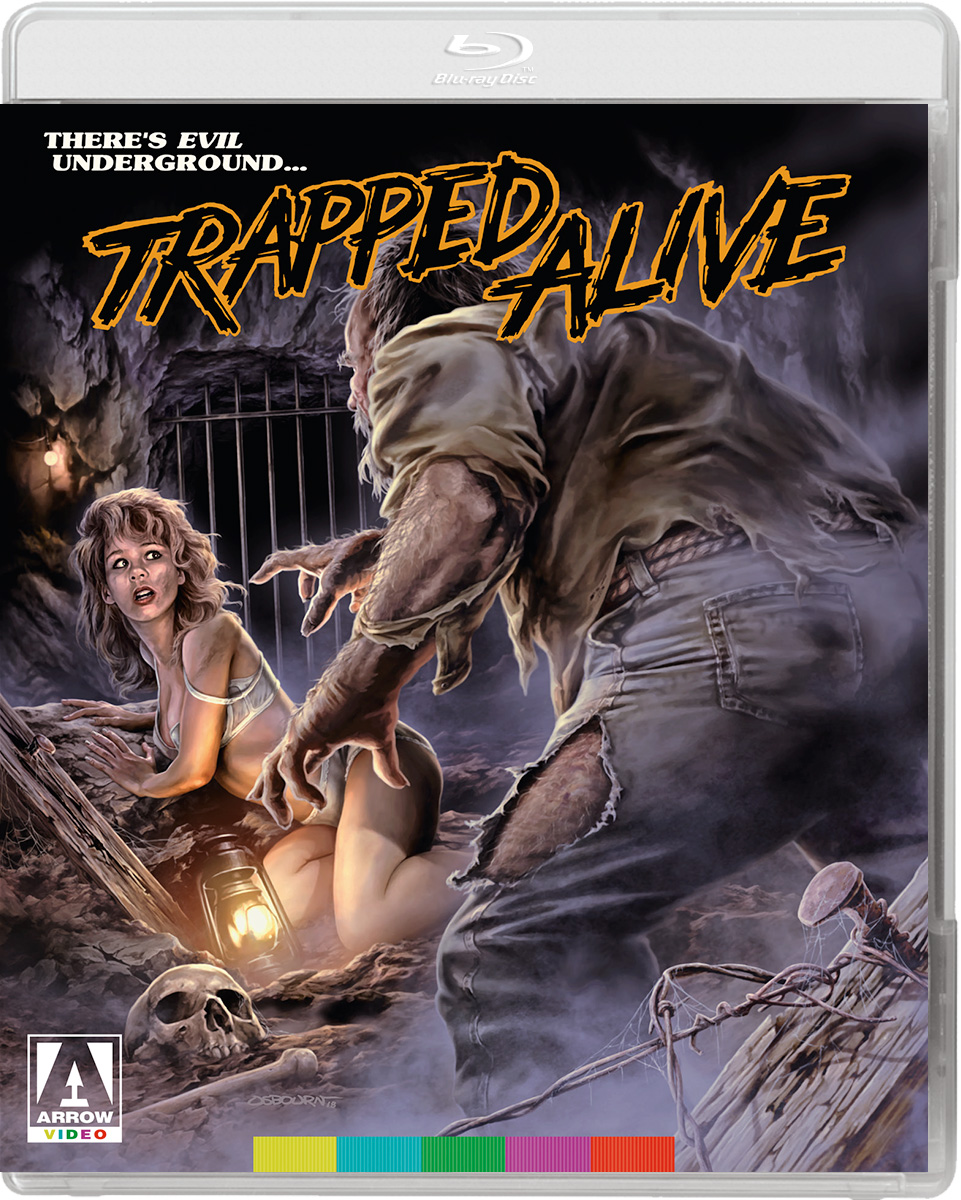 Cannibalistic Humanoid Mine Dweller was too on-the-nose

Leszek Burzynski’s Trapped Alive (also known as simply Trapped or Forever Mine) was filmed in Eagle River, Wisconsin, known for its frigid temperatures and snowfall. Set at Christmastime, the movie features some incredibly cold atmosphere thanks to the real setting, and that helps set the tone as our main characters make their way through blustery weather to a hoppin’ Christmas party before being abducted by three escaped convicts who accidentally fall through an abandoned mine shaft. And that helps with the obvious set design as well – the mine was constructed, but the realism of the elements helps sell the production’s small spaces. But those same small spaces, and the confined area in which the film takes place, also hurts the pacing – though Trapped Alive has a number of interesting developments, it never really breaks free of claustrophobic conventions with which it surrounds itself, leading to a slow-paced slasher film with a surprisingly low body count.

The film follows Lucy “Robin” Adams (Sullivan Hester) – we’re not really given a reason for the nickname so just go with it – and her father’s (Cameron Mitchell) assistant Monica (Laura Kellison) after they’re abducted by the convicts Face (Alex Kubik), Mungo (Michael Nash), and baby-faced Randolph “Hot Rod” Carter (Mark Witsken). Avoiding a police stop, they pull into the abandoned Forever Mine and fall through the shaft, only to face an underground monster who feasts on human flesh, presumably because he’s also been… TRAPPED ALIVE! A cop (Randy Powell) also joins them and learns how to stop judging people.

Shot for a pittance using mostly unknown cast and crew, Trapped Alive isn’t a terrible slasher film, and Burzynski certainly knows these types of films; he wrote Blood Harvest prior to this film under a pseudonym. However, the logistical elements of the movie limit what Burzynski can do. For one, the film has a small cast for a slasher movie, relying on four main characters throughout most of the running time as they bicker trying to find their way out of the mine. The killer – a frazzled old guru-looking guy living in the mine – rarely shows up, and when he does, the scenes play out almost in slow motion. Because of the smallish sets, Trapped Alive is forced to figure out ways to segment characters from each other, and this often means Burzynski has to rely on oddly-paced sequences. One in particular involving a man getting pulled up the mine shaft via pincer and chain, is about as glacially-paced as possible, eliminating a lot of the tension.

With that said, Trapped Alive also has a lot of weird randomness to it that helps bridge the boring gaps in the story. Powell’s character shows up at a woman’s house to quickly have sex with her after she tearfully expresses her grief about her father; Face gives Monica a lesson in stripteasing before forcing her to do it at gunpoint; the final reveal in the last few minutes to explain the monster is absolutely ridiculous and better for it. Trapped Alive has excellent moments like these; it’s just too bad that the rest of it is surrounded in monotony and some very poor acting.

Fans of slasher films will certainly want to give this one a spin; it’s a relatively obscure film buried under the detritus of time, unnoticed in part because of its lack of theatrical release. Just know that there’s a reason it’s been hidden in rubble: it’s not one of the better variations of the ’80s slasher despite some of its unique beats.

Arrow Video’s Blu-ray features a new 2k scan of the original camera negative that retains the films 1.85:1 aspect ratio. The quality is quite good considering some of the lower lighting during the film; because much of it takes place in dark damp underground areas, the film has a tendency to be dark with soft lighting, but Arrow manages it well with consistently sharp detail. Grain is at medium levels and never obstructive; colors, though at a minimum, are well-maintained. Despite a couple of soft shots this release looks stellar.

Audio is an LPCM 2.0 stereo track, although the details of this are sort of confused since the original release was mono and Arrow’s website also lists it as a mono track. Whatever the case, the LPCM audio sounds fairly good although it can be a bit flat especially towards the beginning of the film. Occasionally in the mine voices take on a weird echo, though I presume that was part of the recording itself. Overall, audio isn’t in too bad of shape and it does the job. English subtitles are also included.

Extra features are jam-packed; its biggest selling point is the presence of three audio commentaries, one from director Burzynski, another with Hank Carlson and Josh Hadley, and a third from the Hysteria Continues guys. Also of note is a great 30-minute documentary on making the film that gathers interviews with Burzynski, Hester, Kubik, cinematographer Nancy Shreiber, and more. It’s a great look at the film and definitely a recommended watch (and you get to hear about catering!). Also included is another interview with Burzynski about his early career, running about 9 minutes. An interview with Hank Carlson, makeup artist, dives into how he got his first job on this set (about 18 minutes). An archival Upper Michigan Tonight recording is also included. Finally, an image gallery rounds out the features on the disc.

The package comes with reversible cover artwork and an essay booklet with full color photos featuring an essay about the film and a look at the life of Paul Dean (who plays the monster), written by his son.

Overall this is a great release for a completely average slasher film, and fans of Arrow’s releases or relatively unknown horror will definitely want to grab this.

CHECK OUT
Our Trapped Alive screenshot gallery.
Take a second to support Cultsploitation on Patreon!