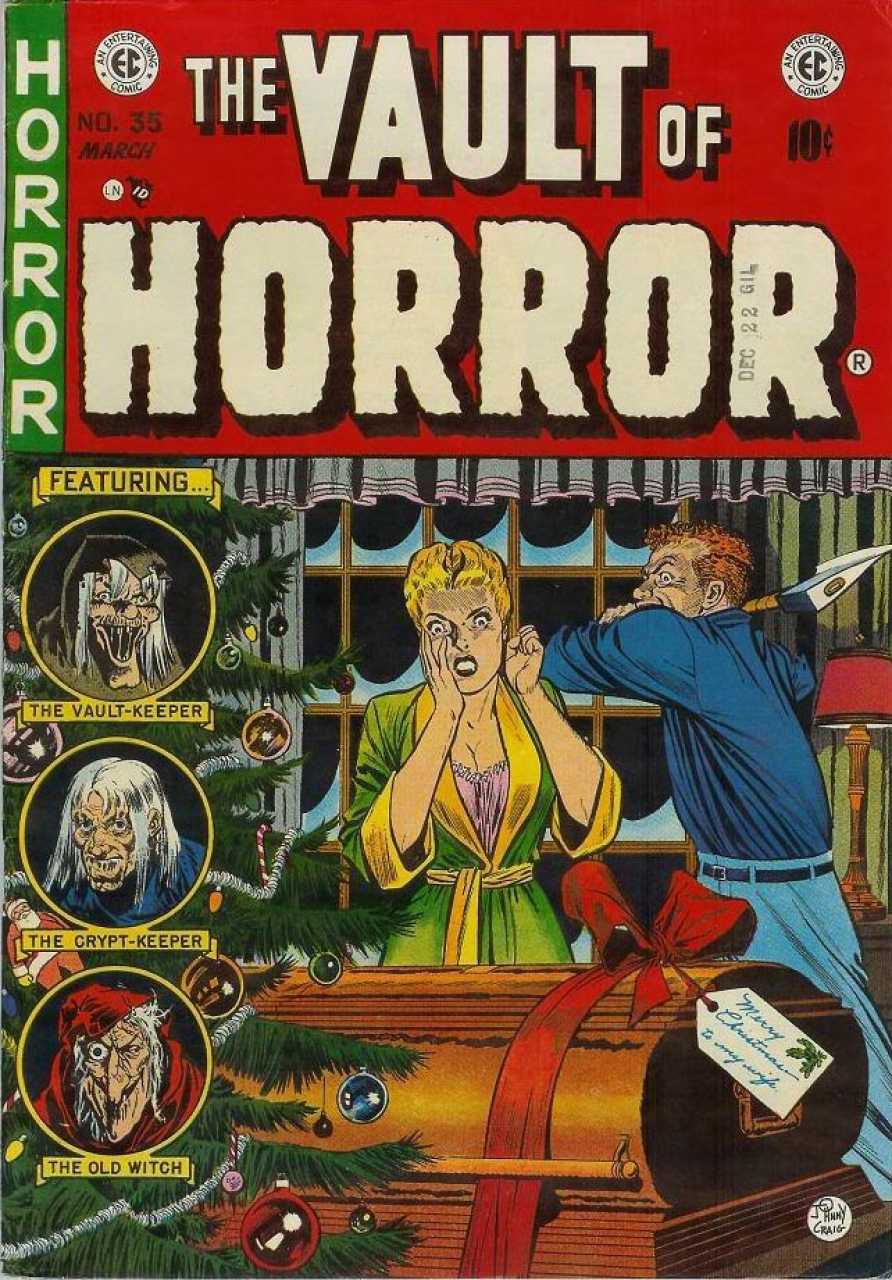 Which One’s Better: The Film or TV “And All Through the House”?

The yuletide season is upon us, and every year I try to make it a holiday tradition to watch “And All Through the House,” one of my all-time favorite Tales from the Crypt episodes. But I realized that rarely do I ever make it a point to watch the original film version of that Vault of Horror adaptation coming from the 1972 Amicus Productions movie. Pondering my obvious bias, I decided to watch both of them back to back as the Christmas lights blazed, starting with the film Tales from the Crypt first and then moving to the TV show version. Which one would win out, and why? First, let’s take a look at both in a general sense.

In the Amicus Productions film, Joanne Clayton becomes sick of her husband on Christmas Eve, staging a murder scene into an innocent fall down the basement stairs due to too much alcohol. Why would Joanne pick Christmas Eve, and what makes her kill the guy, you might ask. “And All Through the House” won’t give you an answer – there’s nothing to indicate that Joanne’s husband is a bad guy, and in fact he’s jollily placing her Christmas present underneath the tree moments before his death. He’s even written on the card how much he loves her. Perhaps it’s his cigar smoke – we’ll never know.

However, Joanne revels in the murder and seems to have it all planned out. She scoops up some of the paint-thick blood from the rug (a white rug! a terrible place for a bloody murder!) and stages the “accident,” and she burns all of the evidence. However, a maniacal Santa Claus has escaped from an asylum near Joanne’s house, and she gets a visit from the guy while she’s trying to finish her clean-up. She can’t call the cops, so she decides to finish her chores before, eventually, her daughter lets Santa in to deliver his gifts.

Robert Zemeckis’ television adaptation differs quite a bit from the 1972 story. First and foremost, Zemeckis and screenplay writer Fred Dekker give the murderous wife a reason to commit a firepoker atrocity – her husband’s a huge dick, and it becomes apparent that the Wife has had enough of his shit; she’s even been cheating on him with someone else.

Instead of staging the incident, though, it looks like this Wife doesn’t really have a plan – she simply drags her husband into the raging snowstorm and leaves him out there to freeze. What the ultimate goal is is never made clear. However, her plans are also dashed when said escaped maniacal Santa Claus comes to visit. Unlike the jolly old guy from the film version, this Santa is just plain demented – he’s got scars on his face, crazy eyes, and some awful dental work.

The Wife has an idea, though, and a smart one at that. She’ll just tell the cops that Santa Claus murdered her husband. This bitch cold! Again, though, her idea doesn’t work out because Santa manages to get into the house after her daughter lets him, and the Wife is murdered in violent fashion next to the same fireplace where her own murder weapon once sat.

I’ll start by saying that I do like the original Tales from the Crypt film, and there are certain things about it that I enjoy immensely. One of them is the literal blood handwashing that Joanne does as she’s cleaning up her husband’s blood – there’s an implication there, a la Macbeth, that she can’t get clean of the blood no matter how much scrubbing she does. That impact is made more apparent because of the thick blood that’s used in the film; while it’s not realistic, it does add some great color to the story. I also like the lack of motivation besides the money – it makes Joanne a far less sympathetic character.

However, in most other ways, the TV version of “And All Through the House” far surpasses the Amicus Productions tale. Zemeckis knows how to direct a Christmas film (he’s since done it two more times), and he captures the ambience of Christmas Eve better. The dim Christmas lighting is excellent (and reminiscent of Black Christmas), the classic carols add atmosphere, and the snowy backdrop gives even more darkness to an already sinister night. The Wife’s smart thinking also makes Joanne’s actions in the film look strange – when a killer Santa attacks, most people don’t forget about him and clean up their house. The Wife in the TV episode does more realistic things like calling the cops, planning to blame her husband’s murder on the killer already at the house. She even manages to steal Santa’s ax.

But the real draw here is Saint Nick himself, who brings the ultimate terror to the TV Tales from the Crypt. Larry Drake’s makeup is truly frightening and those scenes when Santa’s skulking around the outside of the house did scare me quite a bit when I first saw this episode as a kid.

While both “And All Through the House” stories highlight the creepiness of a tradition where a stranger comes into your house on Christmas Eve, the TV version perfectly encapsulates EC Comics’ penchant for both chills and cheese, with a much larger emphasis on black comedy. If you have to choose one this Christmas, make it the TV version.