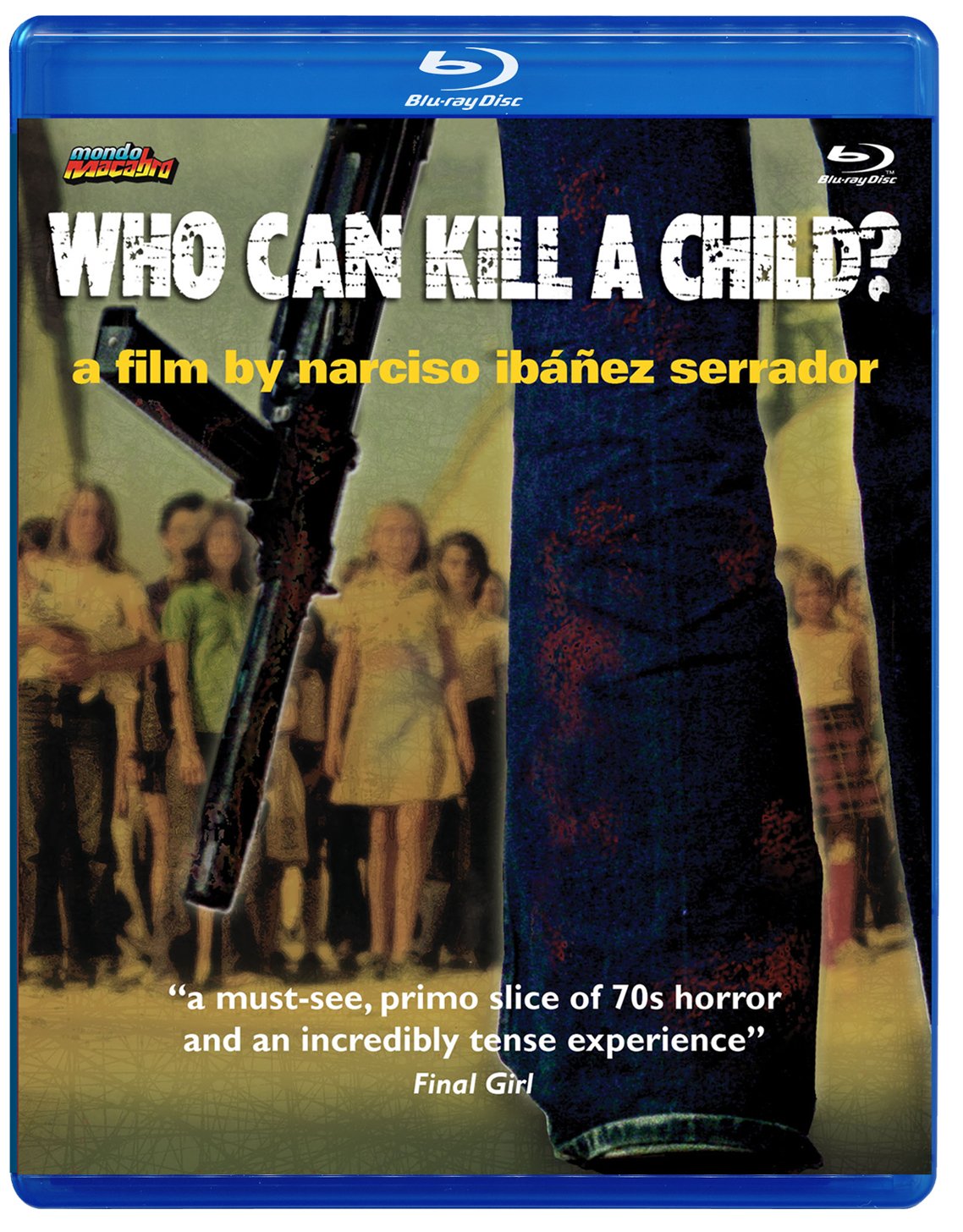 Who Can Kill a Child? Blu-ray Review (Mondo Macabro)

Who Can Kill a Child? is an eerie film about killer children that makes its ridiculous premise terrifying. Mondo Macabro has done an excellent 4k restoration along with getting new extras and porting over all the previous ones from an earlier DVD release.
Film
Blu-ray
Reader Rating0 Votes
4.6

Tom and Evelyn arrive in Almanzora for a relaxing vacation at a beach resort, celebrating Evelyn’s pregnancy and generally just enjoying life. But their fun is cut short when they realize that there are no adults in Almanzora and the place is deserted. They attempt to find anyone who can help them with their accomodations, but only children seem to be skulking the island. Eventually, they begin to realize that the children have rebelled against their parents and other adults and killed off everyone on Almanzora, and they want Tom and Evelyn to be next.

Who Can Kill a Child? Film Review

One year before Stephen King would publish his seminal short story “Children of the Corn,” Narciso Ibáñez Serrador wrote and directed a film called Who Can Kill a Child? (also known by a lot of other titles). Based on novel by Juan Jose Plans, the film features an English couple who journey to the fictional island of Almanzora for vacation before their child is born, only to discover that all of the adults on the island have been murdered by marauding packs of children. The film takes itself quite seriously despite what sounds on paper to be a ridiculous premise, but Serrador’s brooding, moody direction helps to cement the very real threat of murderous kids on the loose in a deserted town.

Serrador follows the main couple Tom (Lewis Fiander) and Evelyn (Prunella Ransome) as they make their journey from the mainland by boat to Almanzora. From the outset, the film makes a couple of things known that are important to the rest of the proceedings: Almanzora isn’t a super popular place, and even the mailman doesn’t go out there much; it’s quite far away since it takes the couple four hours by boat to get there; and Evelyn is pregnant, an additional obstacle for the two to contend with. Who Can Kill a Child? relies on its setup for the first hour of the film, with Serrador maintaining a steady atmosphere throughout; once Tom and Evelyn arrive at Almanzora, the immediate eeriness of the deserted location sets in. As the two search through dirty stores and bars, the creepy feeling that something is very wrong in Almanzora creates a tension that works extremely well.

It also helps that Serrador isn’t afraid to let the setting and the characters do most of the work, along with a suspenseful score that alters a traditional children’s lullaby. Ultimately not much happens during Tom and Evelyn’s first encounters with the children of Almanzora, but that makes things even scarier once they do experience something: the off-screen beating of an elderly man by a child who steals his cane. The moment is so abrupt that it’s shocking without needing to show the actual violence, and Who Can Kill a Child?‘s kid actors are able to evoke a lot of malevolence with just giggles and smiles alone.

One thing that does tend to slow the film’s pace, though, is Ransome’s character. Evelyn’s constant naivete becomes grating, and it’s clear that Serrador doesn’t really know what to do with her because of the pregnancy. Still, once the action really gets started, the pregnancy does add an additional level to the film because of Who Can Kill a Child?‘s supernatural element, leading to a surprise death that I won’t reveal in this review. But the impending childbirth also adds some extra pathos to its characters; it sets up the difficult question that the film’s title poses, especially since once one kills a child it would presumably be difficult to go back to normal life and have a baby after.

Luckily, Serrador isn’t afraid to go all in on the child death either, a partial reason why the film encountered critical backlash and an edited version titled Island of the Damned that eliminates an arguably important mondo-style documentary at the beginning of the film about child murder. While the movie avoids actually killing its kids for nearly the entire running time, the first death is a visceral and surprising – and, more importantly, humane – reminder of necessary violence and what one will do to protect loved ones.

Who Can Kill a Child? will make viewers uncomfortable, as it should; it is, in part, a statement about unnecessary human suffering and cruelty in the modern world. Serrador is at the top of his directing game here with an eerie atmosphere and some shocking story choices, and ultimately Who Can Kill a Child? is most likely the best representation of rogue murdering children put to film. This is one that you have to watch, posing the film’s inflammatory title question to yourself while viewing it.

The violence is reserved throughout Who Can Kill a Child? but the moments are more focused on dread than gore. Still, the film does employ quite a bit of vibrant blood and there are a few bullet-related deaths.

There is one breast shot that will not titillate whatsoever, but other than that, nothing else.

*Brand new 4K restoration from the original negative
*Two different English language tracks – the Spanish export version and the US ‘ISLAND OF THE DAMNED’ dub – as well as the Spanish language track with optional English subtitles
*Two options for the opening credits; the longer ‘mondo’-style opening of the Spanish/export version and the shorter US ‘ISLAND OF THE DAMNED’ opening
*Brand new audio commentary by Kat Ellinger and Samm Deighan of the Daughters of Darkness podcast
*Brand new interview with horror historian and critic Kim Newman
*Archival Spanish TV documentary on the film
*Archival interviews with director Narciso Ibanez Serrador and cinematographer Jose Luis Alcaine
*Trailers and radio spots

Who Can Kill a Child? Blu-ray Review

Mondo Macabro has done a new 4k restoration from the original negative for Who Can Kill a Child? and the results are immediately apparent. The film looks pristine, with a natural grain appearance and great clarity, along with no damage whatsoever. Colors really pop and skin tones are even and warm; even Prunella Ransome’s green eyes look vibrant, and the red blood looks great. This 4k transfer is a great addition for fans and Who Can Kill a Child? has never looked this good; definitely recommended.

Mondo Macabro offers three different audio tracks for watching the film; there’s the standard English DTS-HD MA mono track with occasional Spanish dialogue, the Spanish language DTS-HD MA mono track with English subtitles, and an alternate English language track with occasional Spanish dialogue. All of them sound great and very similar, and there are subtitles for each of them as well – though the two English versions don’t contain subtitles for the English dialogue, just the Spanish. Also included is the alternate Island of the Damned cut of the film which is basically just 10 minutes shorter without the mondo documentary at the beginning of the film. Tons of ways to watch this movie, which is a real treat for completionists.

Besides the inclusion of the different cuts of the film, Mondo Macabro has also provided a new audio commentary from the Daughters of Darkness, Samm Deighan and Kat Ellinger, for some great commentary on the movie. Also new to this release is an interview with Kim Newman about lots of different killer kids films; Newman is always a great resource, and he gives about 15 minutes of interview time about various genre films.

Along with these new features, Mondo Macabro has ported over the Dark Sky extras from a previous DVD including interviews with Narciso Ibanez Serrado and Jose Luis Alcaine and a 46 minute documentary look at the film from a television special. A trailer for the Hex Massacre/Lucifer’s Curse double-feature is included, as well as other Mondo release trailers and TV spots. This is a great package for collectors and this release is absolutely recommended.