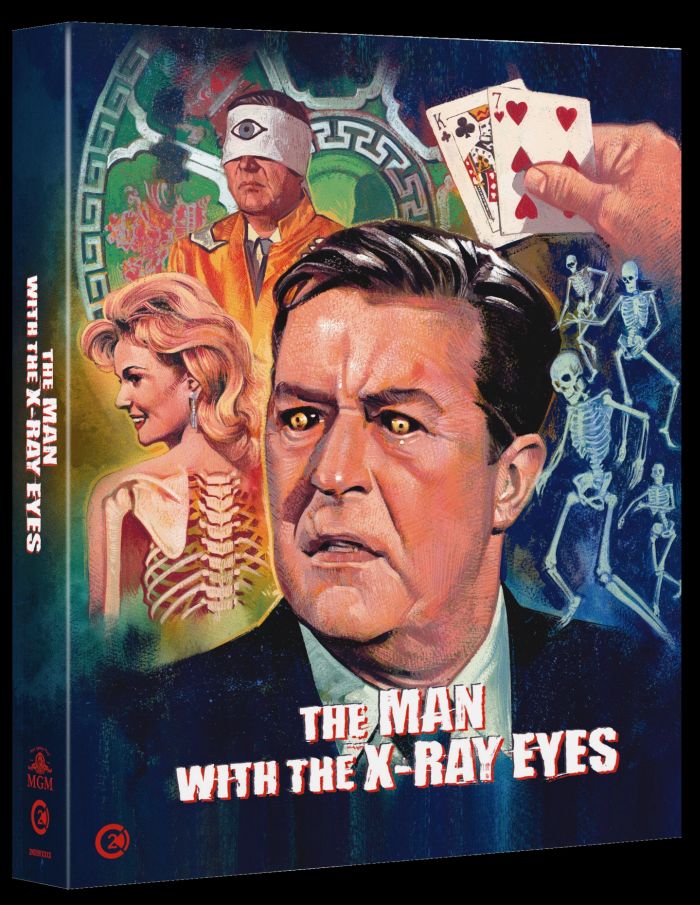 Released in 1963, X: The Man with the X-ray Eyes stars Ray Millian in the lead role of Doctor Xavier, a scientist on the verge of a discovery, one that could change the world as we all know it. He has almost perfected the ability to see beyond our limited scope, first seeing through objects, then into bodies and finally into a whole other spectrum, straight into the centre of the universe. What lies out there in the great unknown, though, may drive him insane!

X gives the viewer a nice mixture of sci-fi, horror and a dash of comedy (we all know everyone with x-ray eyes would want to see through some people’s clothes, but during a 60s jive dance? Seems like a lot of squatting). We the audience tend to feel for Xavier, even when his outburst may lead to a death or two. His heart is in the right place, but his thirst for knowledge seems to never be satiated. When the end rolls around in X, the film serves up a few existential questions that invoke an almost Lovecraft vibe. Although given the time and budget, the special effects are on the low end, but Roger Corman and crew work rather well in the confines of their budget and do a great job conveying Xavier’s ability to see beyond.

X: The Man with the X-Ray Eyes was originally released on Blu-ray back in 2015 for Region A audiences from Kino Lorber and Region B from Anolis Entertainment, but the release we are talking about today is the new Region B Blu-ray from Second Sight Films. The first thing you’ll want to know is that the video transfer for the Second Sight release comes out as the clear winner compared to all past releases. No compression issues pop up and the film grain is never chunky. There is a bit of dirt and debris present, but it’s few and far between. The colours and contrast are also top-notch. The audio is presented in LPCM Mono. I heard no issues with the soundtrack.

Special features have also been improved on, including a new 14-minute interview with Roger Corman, who reminisces about making the movie and how if he shot it nowadays it would contain more nudity! Also included is a 23-minute interview with Kat Ellinger, Author and Editor of Diabolique. The feature isn’t listed as new, but I don’t see where or what release this interview was included previously. Rounding out the features are previously included ones, but still highly welcome. We have two audio commentaries, one with Roger Corman and the other with Tim Lucas. There is the original prologue, which runs 5-minutes and spoils the ending of the movie, so I can see why it was removed. There is a short interview with Joe Dante, a Trailers from Hell with commentary by Mick Garris, and finally the trailer. Because this is a Limited Edition release, Second Sight also provides a fancy slipcase, reversible poster with new and original artwork, and finally a softcover booklet with new writing by Jon Towlson and Allan Bryce.

X: The Man with the X-ray Eyes is an enjoyable low budget Corman flick that leaves the viewer pondering certain questions about the universe and beyond. Second Sight releases a standout Limited Edition Blu-ray that trumps all previous releases. Recommended for all!