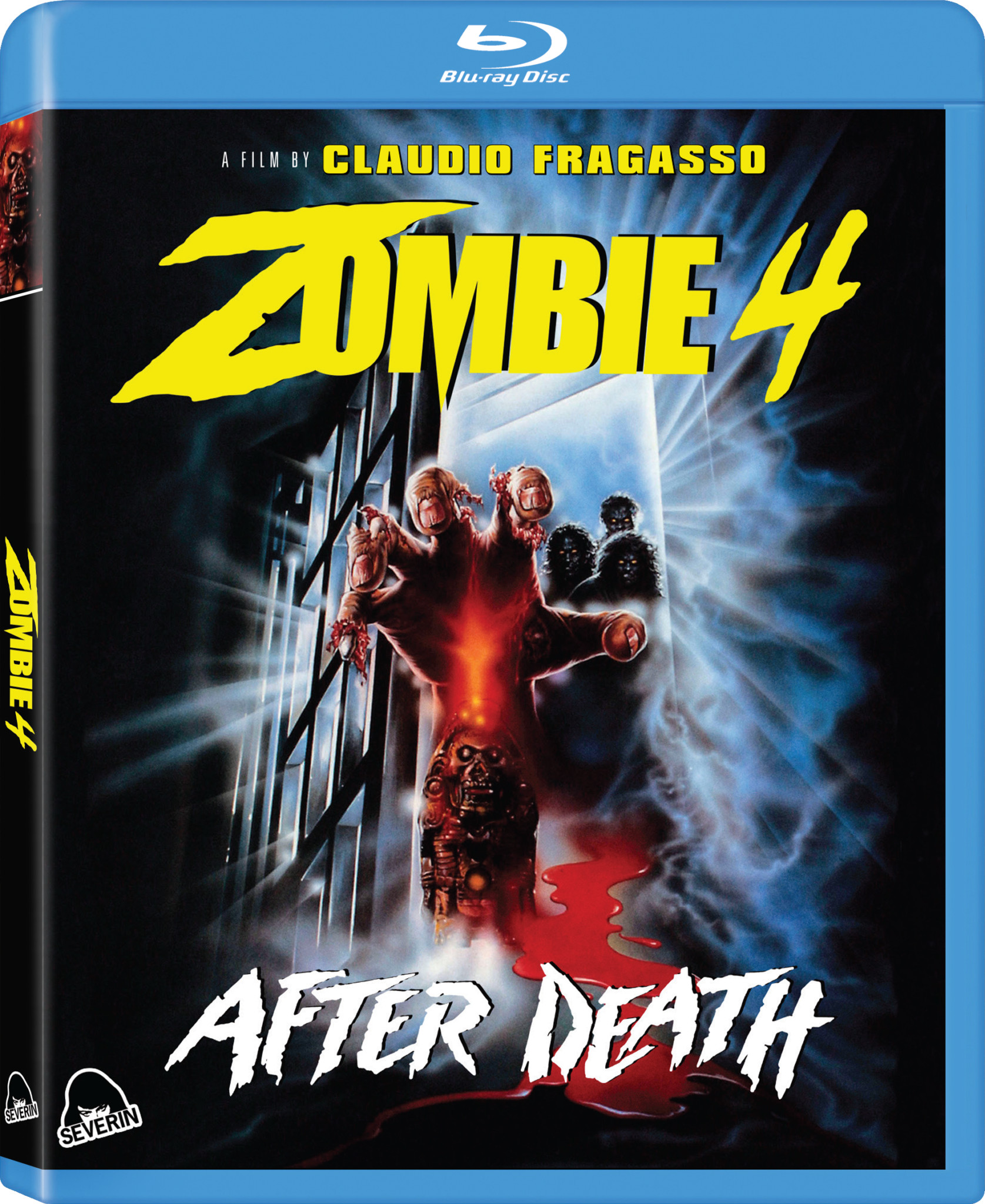 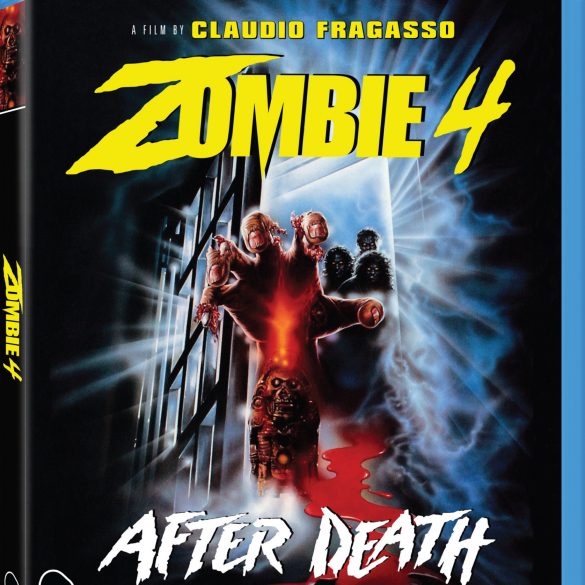 Zombie 4: After Death Blu-ray Review (Severin Films)
Zombie 4: After Death is a very familiar continuation of what Fulci began in Zombie 3 - it's cheesy but a lot of fun thanks to more good FX work. Severin Films has brought the uncut version to Blu-ray with a solid 2k transfer and a number of valuable extras.
Film
Blu-ray
Reader Rating0 Votes
4.2

A non-descript island has been a scientific experiment location for doctors looking to craft a cure for cancer and other ailments, but they accidentally angered a voodoo priest who has opened the gates of Hell and summoned zombies to take over the area. 20 years later, Jenny returns to the island with a group of friends, and they quickly realize that they’re in for a really bad experience. Also, a group of researchers also happen to be there, and they stupidly read from the Book of Death as well. Not very smart all around.

Claudio Fragasso did a lot of work to finish Lucio Fulci’s Zombie 3, so it makes sense that he would inevitably have some interest in continuing the theme of the series, if not expressly crafting After Death as a sequel to Fulci’s work. Like most other Italian films and the Zombie films in general, the title of Zombie 4: After Death has wavered throughout its releases – first releasing as After Death before getting the Zombie 4 sequelization attached to it and then also following Zombie 3‘s alternate title as Zombie Flesh Eaters 3. Whatever the name, Fragasso’s film (written by his partner Rossella Drudi) changes things up a bit for the Zombie franchise by introducing voodoo-resurrected undead instead of the traditional virus. Nevertheless, the actual experience is quite similar: it’s cheesy, ultraviolent, and not very good from a conventional cinema standpoint, but its multitude of flaws become charming in their own ways.

Drudi basically follows the same template as her other script for Zombie 3, except the environmental aspect is replaced with voodoo – still, Zombie 4: After Death‘s theme ultimately deals with science overstepping the boundaries of life and death. The setup is about as bare bones as it gets – for really no reason, a group of friends visit this zombie-infested island 20 years after its voodoo curse, and all of them end up getting eaten in some particularly malevolent way. On another part of the island, Chuck (Joe Stryker), David (Massimo Vanni), and another girl are researching the caves of the island to find out more about the experiments that had been done 20 years previously, and most of them also wind up as chuck meat.

As is so often the case with Fragasso films, Zombie 4 spends little time with its characters, instead effectively pacing the film out so that they can all be killed at opportune times. The draw is not so much the plot – which suffers from pretty much every ailment one can think of, lacking direction and more frustratingly a conclusion –  but the methods that Fragasso employs to kill off his cast. The zombies this time around are a bit more menacing than the Filipinos of Zombie 3, most of them covered in rotting burial garments that add great effect to their visage. They also tend to know kung fu and have some form of sentience, also contributing to the mayhem. Mostly, though, it’s the special effects that carry the film – Franco Di Girolamo returns and does a consistent job here with a lot of peeling, ripping, and eyeball-plucking makeup art.

Again, Zombie 4: After Death isn’t a particularly good film and in some ways Fragasso recognizes this during the movie; but watching it simply to appreciate the gore, the cheese, and the downright catchy “Living After Death” song from Al Festa is a good way to enjoy this cinematic experience without thinking too critically. And you definitely don’t want to spend too much time on the ending – neither Fragasso nor Drudi did.

Zombie 4: After Death excels at its violent effects. People are ripped to shreds, a man gets his face peeled off, Jenny twists her eye out of its socket, and there are a number of normal zombie attacks that feature excessive spurts of blood. This is basically the reason why you watch a Fragasso film. 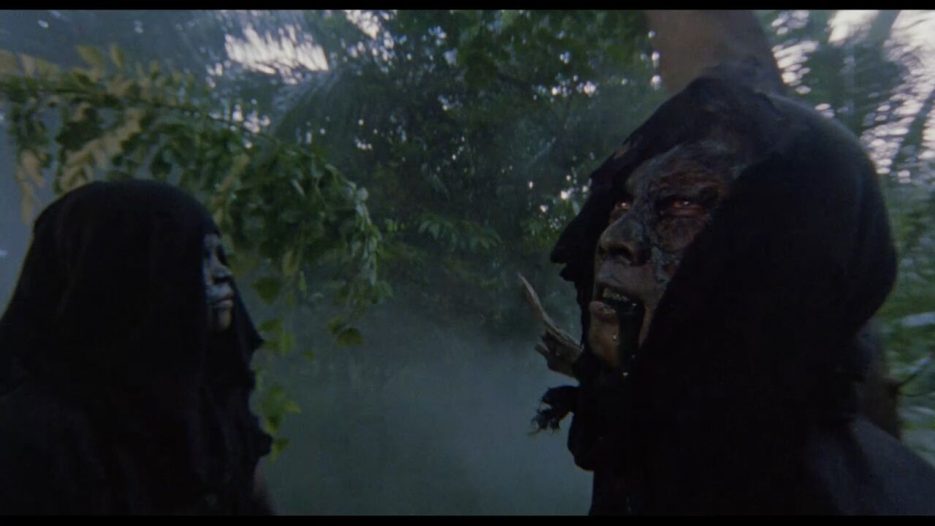 Again, nothing except a quick (and I mean QUICK – in the next scene, she’s in pants) shot of Candice Daly in a bathing suit. 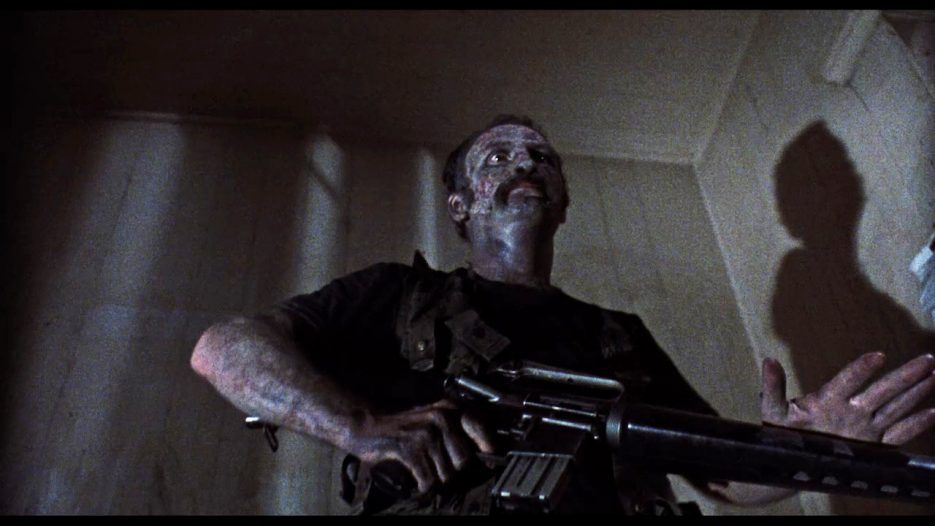 Severin Films has released a new transfer of Zombie 4: After Death with a 2k scan of the film – and this time, it’s totally uncut, adding a few minutes of footage that has been previously missing from other releases. Zombie 4 is never going to look pristine due to its low budget, but Severin cleans up this release very well with good color correction, contrast, and a relatively damage-free image. Some scenes suffer from chunky grain and overall the film tends to feature a heavy grain layer, but ultimately this is the best Zombie 4 has looked and the bright red blood certainly pops.

Severin has provided a DTS-HD Master Audio 2.0 English track for the film, and the soundtrack itself sounds particularly nuanced. The dialogue, though, can sometimes seem a bit muffled, possibly due to the film’s dubbing. Unfortunately, Severin Films has not included a subtitle overlay either; it’s one missing feature I would have liked to have seen on this disc.

One of the big special features on this disc is an interview with Fragasso and Drudi that is an extension of the Zombie 3 featurette; it goes on for 30 minutes and provides a lot of information about the making of this film. Also included is a 9 minute talk with Jeff Stryker (or Chuck Peyton) who has a laugh at the confusion his name presented and also discusses how he got into modeling and cinema. A vintage 3 minute interview with Candice Daly ported from a previous release is included, a very to-the-point discussion about her work in the film. Also, classic behind-the-scenes footage is provided lasting about 5 minutes. A trailer is also included.

Again, the real draw here is Severin’s inclusion of the film’s soundtrack on an additional CD, apparently never officially released in the US. While I can’t imagine how many times I really need to listen to “Living After Death,” this extra disc adds a lot of value to the release. Fans will definitely want to pick up this package since Severin has done a great job finally bringing this uncut version to US home video.