Lucio Fulci had a surprising number of hits despite a relatively lackluster career in cinema and an even worse critical appeal; but arguably his most popular and well-known release, the one that has cemented Fulci as a horror innovator posthumously, is Zombie (or Zombi 2, or Zombie Flesh Eaters). Whatever you want to call it, Fulci’s Grand Guignol offering about flesh-eating undead terrorizing a Caribbean island as a doctor desperately tries to stop the outbreak – and figure out what kind of voodoo is causing it – is a work of art, a film that began as a direct rip-off of George Romero’s insanely popular Dawn of the Dead (or Zombi in Italy, hence the sequalization in Zombie‘s alternative title) and then spiraled into something much different. Fulci certainly utilizes the popularity of Romero’s shambling dead, but Zombie‘s plot is much more surreal and creative, a penchant the director would draw from again and again, from The House by the Cemetery to A Cat in the Brain.

Elisa Briganti pens the script, which follows Anne Boles (Tisa Farrow) after her father goes missing in the Caribbean and his boat makes it back to New York City with a flesh-eating zombie aboard it. Enlisting the help of curious reporter Peter West (Ian McCulloch), they charter a boat to Matool thanks to Brian Hull (Al Cliver) and his girlfriend Susan (Auretta Gay); when they get there, they all wish they had never come when they discover that Dr. Menard (Richard Johnson) and Anne’s father had been working on trying to cure the island of its horrible sickness that causes people to die and then come back from the dead. 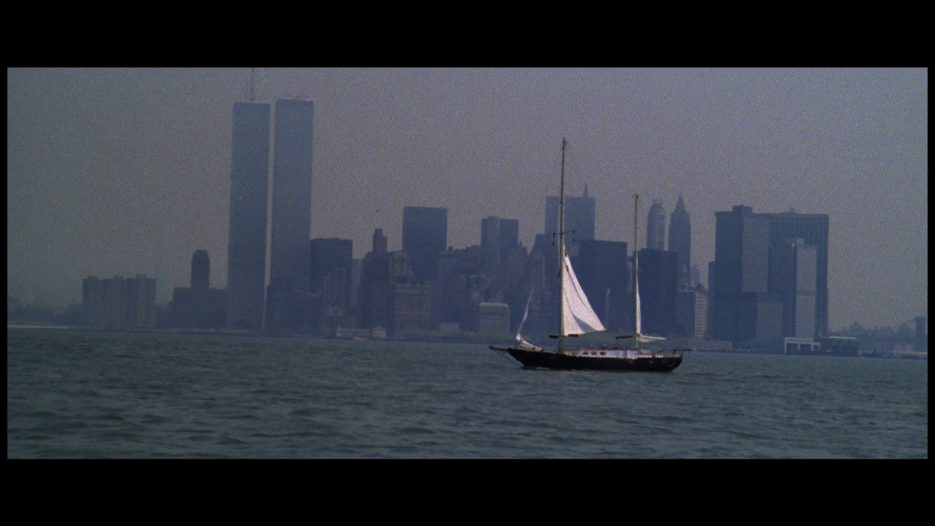 As stated before, Zombie certainly owes some of its inspiration to Romero. But Briganti and Fulci work hard to shift Zombie‘s focus away from the same types of undead characters from Dawn of the Dead. Instead, they employ the older, voodoo zombies that, at the time, had fallen out of favor for the mysteriously risen dead. Here, Fulci’s direction focuses on more dream-like aspects of a zombie outbreak; creatively, Zombie is at its peak. A shark vs. zombie fight is thrilling because of its underwater feats; the island locale is beautiful and affords Fulci a setting that directly contrasts with the horrors happening in this paradise. And that’s not even including all of the gore effects.

The violence is truly where Fulci ramps things up, in part because he does have to compete with Tom Savini’s Dawn effects. Here, Fulci focuses on the most gruesome elements he can think of. There are tons of bloody zombie maulings, a nasty smashed head, throat rippings, with the coup de grace being Stefania D’Amario’s brutal eye gouging sequence. The carnage here is the main draw, but Fulci’s zombies are also just plain creepy as well. A fabulous scene finds our protagonists stuck over the graves of a bunch of Spanish conquistadors, who rise from the grave in slow mournful fashion. Also, Fulci’s consistent use of zombies with sheets over their heads is surprisingly successful. 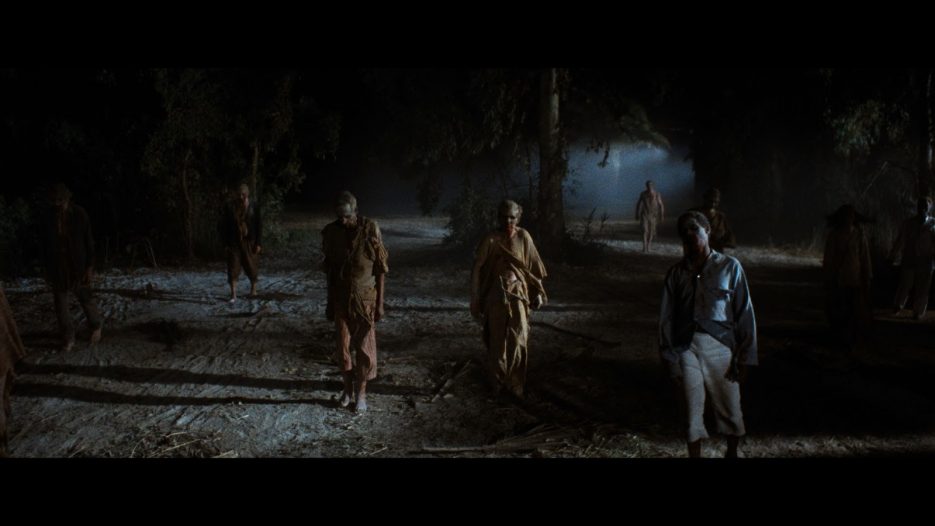 Zombie‘s appeal naturally stems from its gore effects, but it’s also Fulci’s most refined horror offering; it’s certainly not perfect – even at its truncated length, getting the plot going takes a bit of time – but it is a well-done entry in zombie cinema that did its best to transition away from Romero’s body of work. Zombie is a bloody good time with a bite that leaves a lasting impression on even contemporary viewers.

Blue Underground has given Zombie a very similar treatment to its Blu-ray release of Maniac. The most prominent feature is of course the new 4k restoration from the original camera negative in all of its uncensored glory. This new 4k picture looks far better than Blue Underground’s previous 2011 iteration of the film on Blu-ray, with much more dynamic color grading, sharper contrast and detail, and an overall crisp presentation that showcases the beauty of the Caribbean setting. Grain can become a bit heavy in outdoor scenes and sky shots, but overall this is a lovely scan that improves upon an already-good transfer. Zombie fans will love this new release specifically for the scan itself.

For audio, Blue Underground includes the 7.1 DTS-HD Master Audio English and Italian tracks from the previous release, which are  quality audio tracks even though Zombie‘s soundtrack does not really use the 7.1 to its full advantage. Also included are Italian and English DTS-HD Master Audio mono tracks, as well as a French Dolby Digital mono track. All of them sound perfectly fine. English subtitles are included for both the English track and the Italian track, as well as French, German, Italian, Portuguese, Spanish, Swedish, and more.

Blue Underground has ported all of the previously included extras from the 2011 release over to this set on the second disc, although they have also provided a couple of new features on the feature film disc. One is an audio commentary track featuring Troy Howarth, who provides a lot of detail about the nuances of each scene, going over actor backgrounds, trying to pinpoint specific uncredited cast members, and giving a lot of information about the making of the film in general. A second new extra is an interview with Stephen Thrower running about 30 minutes, who discusses the importance of Zombie, its branching away from Dawn of the Dead, Fulci’s late involvement, and its influence in the ’80s zombie/island craze.

Also included in this three-disc edition is a CD soundtrack featuring Fabio Frizzi’s excellent synth-based score. A pull-out booklet includes an essay from Stephen Thrower that dives into the critical reception of Zombie, including many passages from film critics disgusted by the effects or finding very little positive to say about Fulci’s work. Finally, this comes with reversible cover artwork and also an excellent lenticular cover – and it also depends on which copy you ordered, because there were actually three different slipcover options available. Oh yeah, and this one also has a coupon for Eibon Press!

Even for those that already own the “ultimate edition” on Blu-ray, this is a nice step up with the 4k transfer, some new extras, and an excellent package. Munch on this.

Zombie is a top-notch zombie film from Lucio Fulci, and Blue Underground have given it fantastic treatment with this new 4k transfer and loaded package. Check it out.
Film
Blu-ray
Reader Rating0 Votes
4.6
Hosting screenshots is expensive. If you want to see more galleries, consider donating!