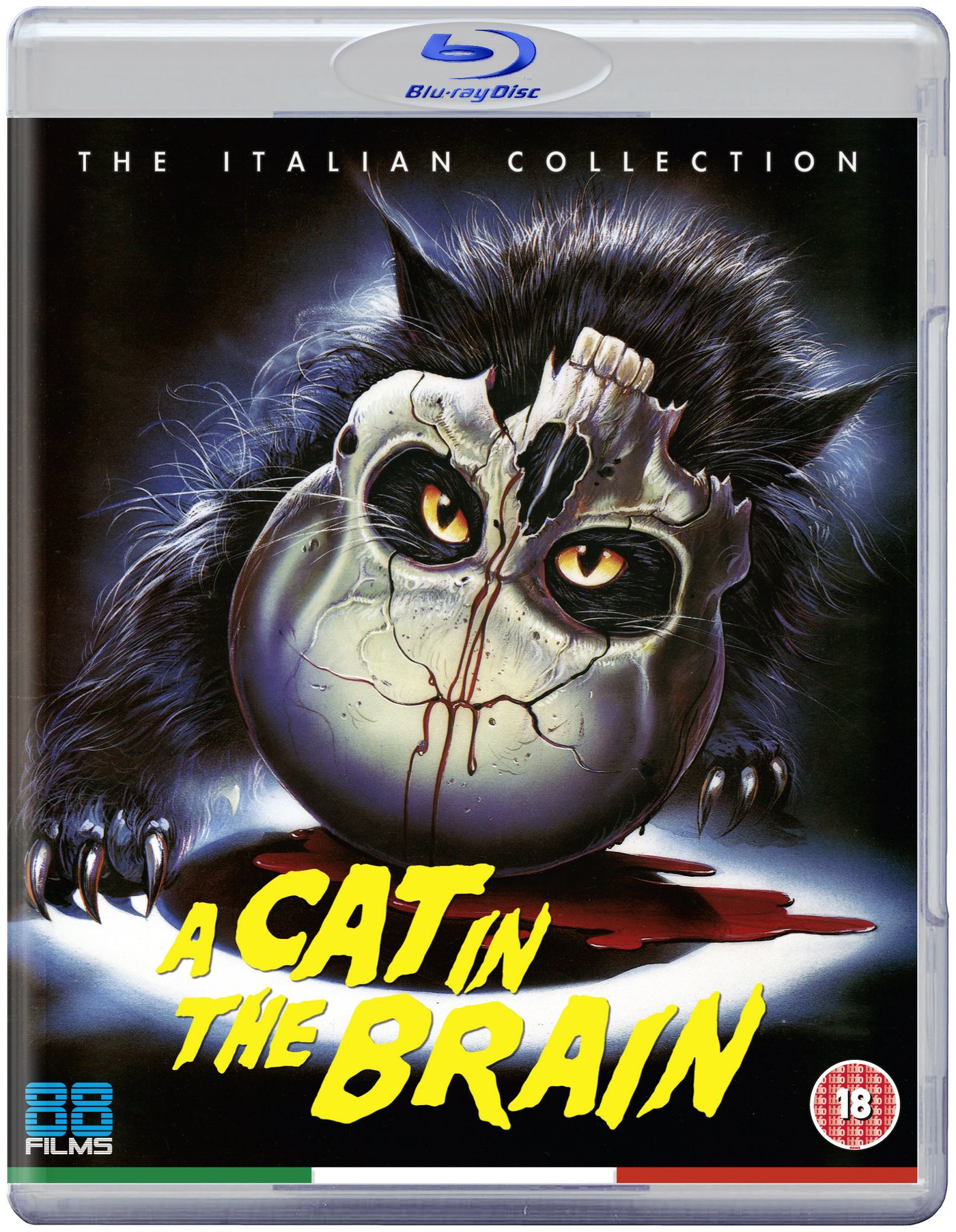 A Cat in the Brain Blu-ray Review (88 Films)

A Cat in the Brain Blu-ray Review (88 Films)
A Cat in the Brain is one of Lucio Fulci's most unique films, and 88 Films provides a great Blu-ray that makes up for its few extras with a nice transfer.
Film
Blu-ray
Reader Rating0 Votes
4.4

Lucio Fulci stars as himself, a man who is quickly going insane due to his film work – he often finds himself imagining scenarios or becoming revolted at the site of meat. Understanding his own insanity, he visits a psychiatrist who further complicates the issue by hypnotizing Fulci into committing murders for him; a ringing sound sends Fulci into a hypnotic violent state, where he kills and mutilates multiple women. All of these moments are taken from previous Fulci films.

In 1990, Lucio Fulci was coming to the end of his career as a director and also, unfortunately, to the end of his life. Emotionally and physically frail, the director faced a number of setbacks that also translated to what most would consider some of his worst film works. However, A Cat in the Brain, also known as Nightmare Concert, was something of a return to form for the director, or at least recognition of the filmmaker’s better years as a sort of memoir about his body of work. It’s also his most metacritical film, because Fulci places himself in the lead role (this time known as Dr. Fulci) as both victim and antagonist.

The film follows Fulci as he realizes that he’s beginning to act irrationally after shooting movie scenes; he’ll imagine violence, and then perpetrate it without knowing it, like attempting to rip the clothes off a woman or breaking a man’s camera. Recognizing that he’s slowly losing grip on reality, Fulci heads to a psychiatrist (David L. Thompson), who hypnotizes him into committing even more crimes. It’s a quick spiral from there as Fulci commits murder after murder, often lustily, often involving beautiful unclothed women.

A Cat in the Brain is a fever dream of mishmashed ideas and collected footage from other Fulci works, and for the most part, the movie simply recycles all of the best gore scenes while Fulci edits a framing storyline around it. Fulci inserts himself as the killer, and although psychoanalysis about surrounding oneself with sex and violence could be applied to A Cat in the Brain, the more prominent element in the film seems to be focused more on Fulci as a central figure. Throughout the bulk of his directorial work, Fulci was often categorized as a “Godfather of Gore,” and often his films were called out for what seemed like rampant misogyny (The New York Ripper). A Cat in the Brain seems like Fulci addressing those concerns, perhaps even mocking himself at times; his lecherous eye behind the camera, calling out direction to a couple having sex on camera, seems like an old man reflecting on the perversions he often depicted in film.

While the film’s plot is far from graceful – and, in truth, there’s not much plot at all besides watching Fulci progress from killing to killing – the ideas in A Cat in the Brain are interesting. This isn’t a masterpiece, and there is certainly an element of accidental thematic resonance; regardless, though, the note of self-deprecating humor here works well to tell this story. But Fulci’s film can be seen in a different, sadder way as well; it’s almost elegiacal, a reflection on what used to be. Perhaps even desperation.

Fulci’s film is unique in its commentary and its constant gore splatter does work to highlight his greatest-hits reel, but some might find the off-kilter storyline messy and lazy in its approach. A Cat in the Brain can be both things, though, and while imperfect, it’s an entertaining way to see a director reflect on his own oeuvre, both with fondness and with self-criticism. It’s a movie that all horror fans should see at least once because of its historical value.

There is a lot of violence, and A Cat in the Brain is primarily built upon it. Fulci uses clips from a variety of previous films including Sodoma’s Ghost, Touch of Death, Massacre, and more; the quality fluctuates, but there are definitely some great moments including multiple beheadings, a ripped-out tongue, multiple stabbings, and melting bodies. The gore is the most prominent aspect of the film, perhaps only second to…

88 Films has released A Cat in the Brain on Blu-ray with a 1080p HD transfer in 1.66:1 aspect ratio. As you may know, Grindhouse Releasing also previously released the film on Blu-ray; comparing screenshots, 88 Films’ transfer looks quite similar to Grindhouse’s, and it’s important to note that all transfers of A Cat in the Brain have been rough due to the source quality and all of the inserted clips.

88 Films has done a great job with the transfer, though the film does retain a heavy grain make-up and an unavoidable softness. There’s definitely inconsistency within the film due to the inserted scenes, with quality varying depending on the other film’s PQ; but the actual framing scenes shot for A Cat in the Brain look very good, retaining good color balance and a lesser grain presence than some of the inserted scenes. Again, due to the source there’s not much to be done there, but 88 Films has made the best of it and eliminated any damage marks in this transfer. All in all, very comparable to Grindhouse Releasing’s Blu-ray, and that’s a compliment for UK viewers.

88 Films provides viewers with two LPCM 2.0 audio tracks: either the English version, or the Italian dub with English subtitles. Both sound good, with just minor variation between the two in terms of audio quality, with the Italian dub being a slightly better representation of the musical score. One small gripe is that the subtitles correspond with the Italian dub and there is no option for the English dub’s subtitles, but it is interesting to note the small differences in the script when watching.

First of all, if you ordered early enough A Cat in the Brain comes with a nice slipcover featuring two different artwork sides. Also included with this package is the standard gray Blu-ray case representing 88 Films’ Italian Collection. Inside the case is a pullout booklet featuring an essay by Calum Waddell about Fulci’s later works and the critical merits of A Cat in the Brain that is definitely worth a read.

On the Blu-ray itself are two extras. One is a new 45-minute documentary on Fulci’s later film works that includes Waddell, Antonio Tentori, Kim Newman, and more; this is an excellent watch since it really dives into a lot of Fulci’s post-giallo stuff from the late ’80s and early ’90s, including some of his lesser known movies. The other extra is a 7-minute performance from Fabio Fabrizzi, filmed on October 2, 2015. It’s another nice addition to this release. A trailer is also included.

Obviously, this release from 88 Films isn’t as packed with extras as the Grindhouse Releasing 3-disc set, but this is a very affordable Region B Blu-ray for those viewers who did not pick up that expensive edition. And ultimately this transfer is as good, with new extras to boot – a great addition to any fan’s collection, especially those already stocking up on the Italian Collection.