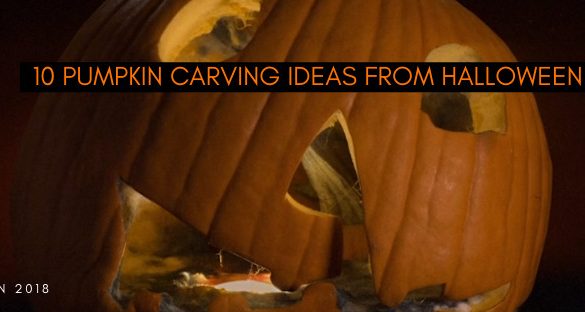 Halloween is upon us, and that means that if you haven’t yet carved your pumpkin, you’re nearly too late! In Trick ‘r Treat, Sam punishes those who don’t follow the Halloween rules, and by and large a lot of them require jack-o-lanterns. That’s why we’re taking some time to document pumpkin carving ideas from Halloween films and television shows, some of the coolest designs ready for your front stoop. It’s all too easy to put up a couple of lights and decorations and call it Halloween, but the work really rests on pumpkin carvers to conjure up a spooky face. It’s a lot of work, and here are a few pumpkin carving ideas to put you to the test.

The Trick ‘r Treat flaming pumpkin is seen at the climax of the film, in which all of the stories sort of meet; it’s fitting, then, that out of all the crazily detailed pumpkins we’ve already seen in the film, this one’s the coolest. It is certainly modeled after Sam’s iconic sack head, but what really makes this is the attention to detail with the teeth. This is a tough design, but it will definitely spook trick-or-treaters if you can get the flames going too.

I’ve always had a soft spot in my heart for The Adventures of Pete & Pete‘s Halloween episode “Halloweenies,” and I have to say that the bullies’ pumpkin heads have always been a stand-out for me. They’re just so decidedly abstract! One kid has made himself a knight’s helmet with two slits and horns on top. Those bullies may have been assholes but they sure were thoughtful about their Halloween mischief. These are fairly easy designs, too, which means it won’t take you a lot of time during your pumpkin carving.

You can’t really get more classic than this opening jack-o-lantern from the Hey Arnold! episode “Arnold’s Halloween.” It’s the perfect epitome of historic pumpkins, and again, it’s a pretty easy design. The hardest part is lining up the eyes and getting that right angle triangle.

4. The Adventures of Ichabod and Mr. Toad‘s Headless Horseman Pumpkin

If you’re looking for a scarier pumpkin design, look no further than the incredibly eerie The Adventures of Ichabod and Mr. Toad. Skip the Mr. Toad half and head right to Sleepy Hollow, where you’ll find the above jack-o-lantern – it’s the Headless Horseman’s makeshift head. Easy eyes and nose, but the mouth is going to be a bit of work.

You could go the super traditional route with Halloween 1978’s opening jack-o-lantern, which is something goofy and also referential. The biggest detail: the knife slip from nose to mouth, which helps to form the outline of a knife blade!

6.  The Simpsons‘ Homer on Fire Pumpkin

The Simpsons has done 29 Treehouse of Horror episodes, but many of them don’t even have much Halloween in them. But “Treehouse of Horror VII” features Homer carving and lighting a jack-o-lantern only to set himself on fire in the process, and the nice thing about this referential pumpkin is that it’s a fairly easy design. The eyes might be a bit tough, but with a maneuverable knife you should be able to carve this guy easily enough.

Chilling Adventures of Sabrina released on Netflix just in time for Halloween, and it already has some killer pumpkin designs – including this spooky, and also spooked, pumpkin behind Ambrose. The Spellman household goes all out for Halloween – perhaps because they don’t need to hand-carve their pumpkins and can rely on magic – but that doesn’t mean you won’t be able to carve this one out yourself. The mouth is quite difficult, but if it’s not perfect, no big deal – just make as many cuts as possible in those areas.

Hocus Pocus doesn’t put a lot of its attention on jack-o-lanterns, but take a look at the beautiful grim reaper pumpkin behind Dani in this still from their trick-or-treating. It does look like a stencil design, and I’m sure you can find similar ones in those jack-o-lantern carving books. And if anyone asks, say it’s Hocus Pocus-inspired.

9. The Nightmare Before Christmas Opening Pumpkins

If you’re looking to relive the magic of The Nightmare Before Christmas, you could pick the very traditional pumpkin that Jack wears in the first Halloween montage; or you could be a bit more creative with these two pumpkins that show up before we even see the Pumpkin King. They’re a good representation of the comedy/tragedy masks – and besides the difficult teeth, not that hard.

Now that Roseanne has fallen out of the graces of pop culture, her Halloween specials may not be as effective as they once were. But that means that carving a pumpkin with her likeness on it makes it even spookier. Do you support her? Do you loathe her? No one will be sure if you have this pumpkin on your stoop, a seriously scary prospect.

Show us your carved pumpkins in the comments!