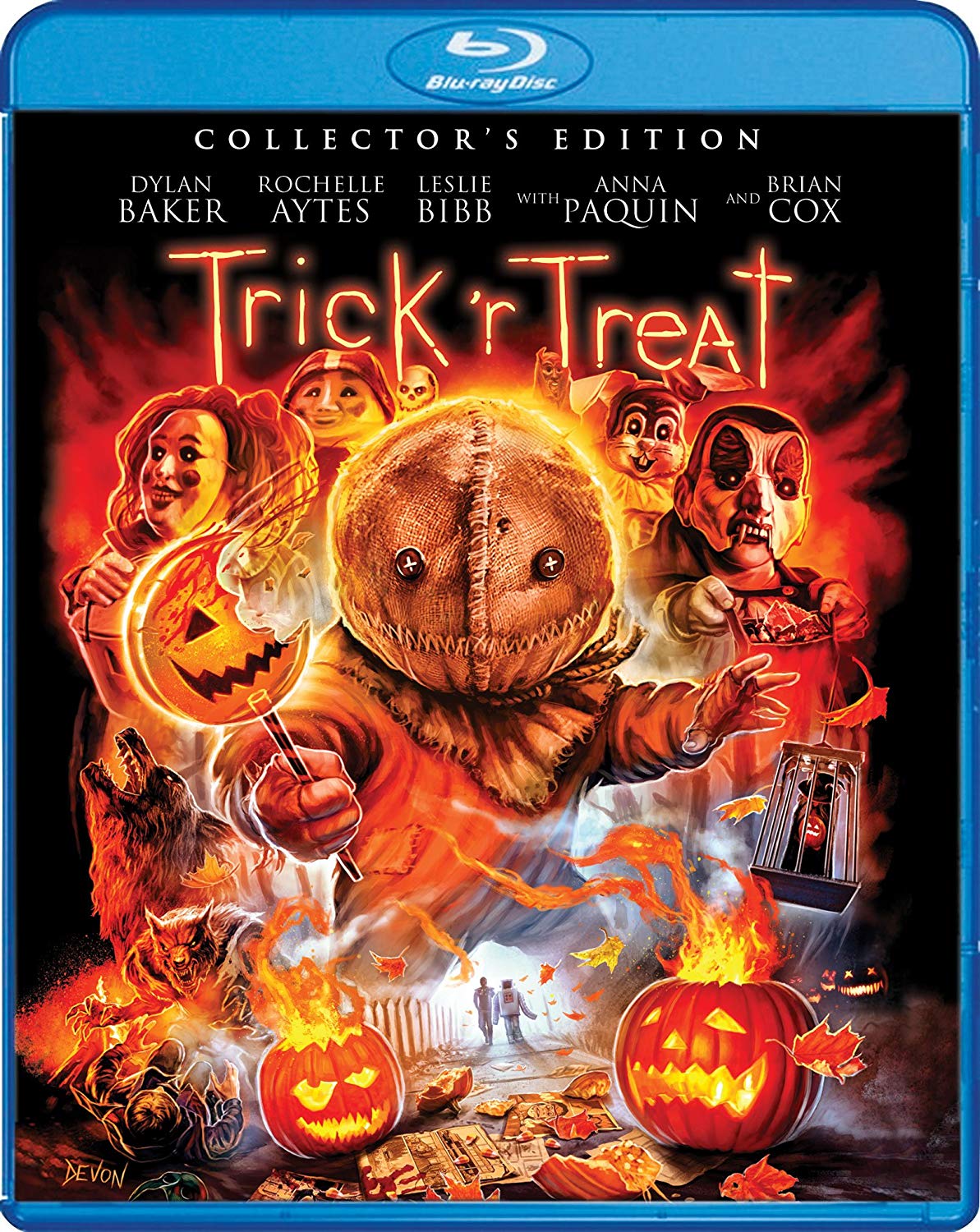 We’re not going to spend any time reviewing Trick ‘r Treat as a film; we’ve done that in quite a few different posts on this website, including this straight-up review, this drinking game, and write-ups on why it’s one of our favorite Halloween movies. Instead, we’re going straight into the Scream Factory Blu-ray review itself.

This release is a Collector’s Edition Blu-ray, which means the package comes with a slipcover and all new artwork featuring Sam and nearly every character in the film. Inside is reversible original artwork as well. The Blu-ray features a new 2k scan of the original film elements, apparently supervised by Michael Dougherty himself. The quality is very good, with some of the stand-out elements being the color timing – especially the orange hues, definitely most important – as well as the crispness of darker sequences. As many are aware, Trick ‘r Treat has already had a pretty good Blu-ray release previously, and it’s difficult to say whether this edition is a giant step up from that original disc. The bigger draw will be the extras, which I’ll cover in a second.

Audio on this disc comes in both 5.1 DTS-HD Master Audio and 2.0. Neither of them have any issues, and the 5.1 does really pop with the various atmospheric sound effects throughout. Also included are English subtitles.

This release is packed with extras, including four new featurettes with Michael Dougherty and various crew members. One is a look at the creation of Trick ‘r Treat including Dougherty’s discussion about his short “Seasons Greetings” evolving into the film. Another is a behind-the-scenes look at actually filming the movie, a third involves a lengthy interview with composer Douglas Pipes about coming up with the themes of the film (originating from the kids’ trick-or-treat jingle), and finally a look at how Trick ‘r Treat eventually got released even despite obstacles and it being a “passion project” of Dougherty’s. Altogether these new featurettes add almost an hour of behind-the-scenes interviews.

Though it has been available previously, new to the Scream Factory Blu-ray is a 2k scan of the original “Season’s Greetings” short along with audio commentary from Dougherty. Also new are conceptual artwork and storyboard galleries, a behind-the-scenes gallery, a collection of the FEARnet shorts for Trick ‘r Treat marathons, and the “Monster Mash” story from his graphic novel.

Then, the rest of the extras are collected from the previous Blu-ray and DVD release of the film. An audio commentary with Dougherty, a featurette on Halloween myths and legends, deleted scenes with optional commentary, and school bus special effects work are all included here.

This is truly a packed Blu-ray, and even if one already owns the great Warner Bros. Blu-ray, this edition from Scream Factory is truly the ultimate Trick ‘r Treat package to own.

If you don't already know Trick 'r Treat is a wonderful Halloween horror movie, then you need to seek this Blu-ray out ASAP. But Scream Factory has done an excellent job on this with a new 2k transfer and tons of new extras.
Film
Blu-ray
Reader Rating1 Vote
4.5
Hosting screenshots is expensive. If you want to see more galleries, consider donating!