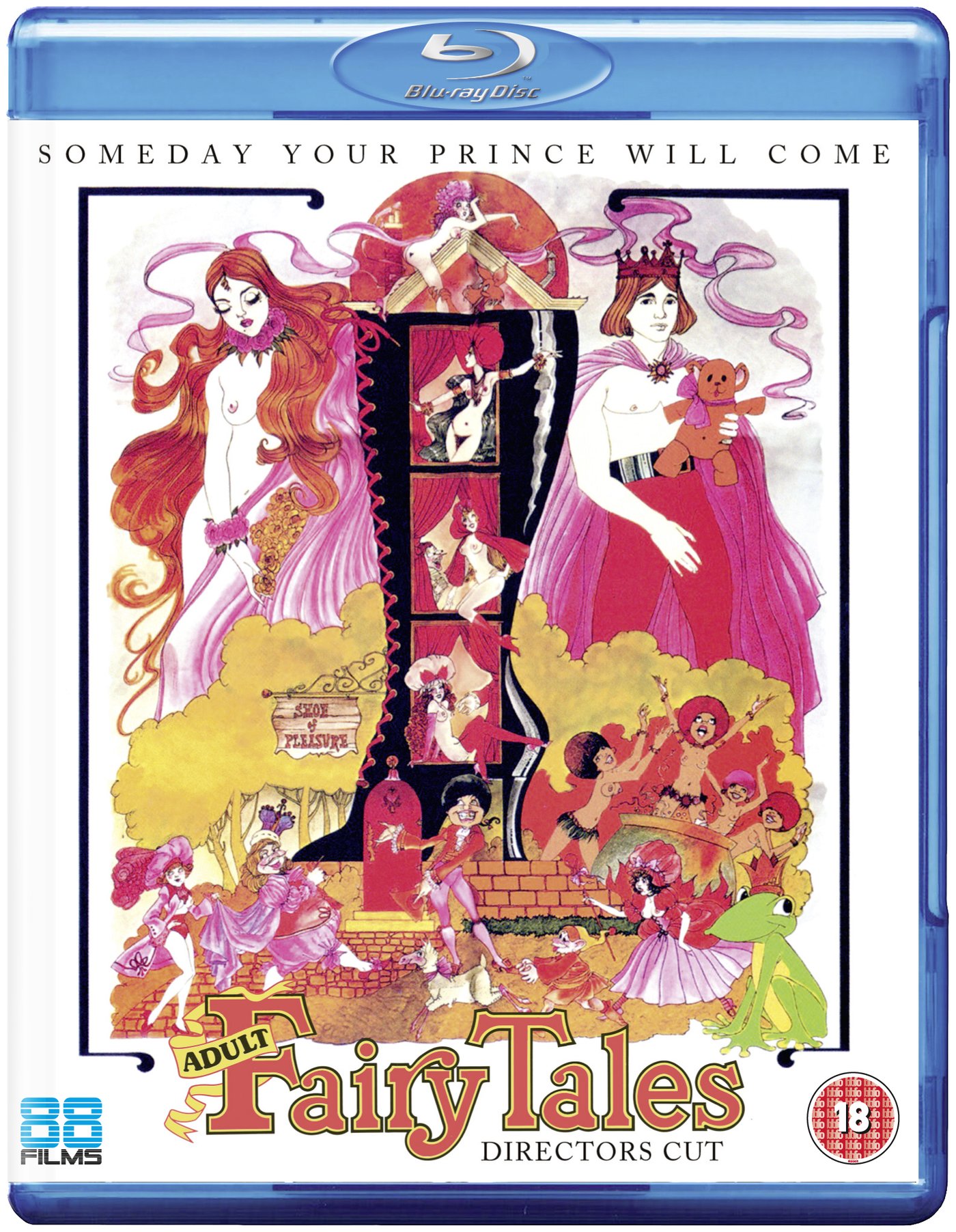 A Prince has to have an offspring in order to keep his title, but he’s not interested in any of the nubile women at his disposal. Unfortunately, he’s become ridiculously smitten with one dream woman and he goes on the search for her, stopping at the Woman Who Lived in the Shoe’s brothel attempting to conjure up his interest in women, even opting for a special magic love potion. This adult musical is sort of like Into the Woods if Into the Woods had a whole bunch of sex, nudity, and raunchy jokes.

Note: screenshots not from the Blu-ray.

The overall tale follows this Prince (Don Sparks) as he ventures out looking for his Dream Girl (Linnea Quigley), along the way meeting up with Sirus (Sy Richardson) who attempts to help him get a girl in the process. He’s forced to sire an heir so it’s a big problem that he can’t perform with anyone, and so all kinds of jokes abound as the Prince heads to a harem only to shrug off pretty much anyone who offers to do the deed. This is like an early representation of what harem-style anime shows have become: in this male fantasy, the women oh-so-willing to help the Prince with his “problem,” but the Prince frustratingly turns down every opportunity.

It’s an interesting idea, especially pairing some of the other fairy tale characters into this sex-laden storyline. Most of the time, the supporting characters like Little Bo Beep (Angela Aames) rarely touch upon the stories of their related fairy tales; they’re mostly there to incorporate the character and give them a sexy spin, occasionally referencing an element of the tale just to to keep the conceit going. But others, like Snow White (Anne Gaybis), offer an interesting sex perspective: her life with seven dwarves is mostly consumed with orgies and then treating them like children and putting them to bed, sort of an unnamed reference to paraphilic infantalism.

While Adult Fairy Tales mostly just wants to have fun with sex the main topic, it does also feature what many mainstream moviegoers might find more taboo topics like homosexuality, S&M, and other kinky subject matter. It’s nice to see Hurwitz tackling some alternate elements besides the usual man-on-woman sex appeal; while this film rarely features men in the same compromising positions as the women, a tacked-on orgy sequence – which, for the most part, serves no purpose to the main plot and is part of the director’s cut – does showcase the occasional glimpse of male schlong and becomes much more pornographic than the softer elements the film usually features.

Surprisingly, the musical aspects of the film are also well-done thanks mostly to the writing and a couple of catchy ditties. While Aames isn’t that great of a singer, some of the other actresses, like Martha Reeves in particular, really do their part to spice up the music. It’s few and far between, but the sing-along moments add some lightheartedness and comedy to what could be slower moments in the film.

No violence in this one.

88 Films has given Adult Fairy Tales a new HD transfer from the original camera negative for this Blu-ray, but one thing that most viewers will find is that the picture quality is somewhat problematic. Most of the film is somewhat soft especially in outdoor scenes, and color and skin tones are very inconsistent, often changing from scene to scene. It’s hard to say how much of this is due to the quality of the camera negative, but suffice to say that Adult Fairy Tales does not look particularly good on this Blu-ray transfer. Still, the important bits and bobs are still visible, so job well done there.

88 Films gives Adult Fairy Tales a linear PCM 2.0 track and it sounds good with no crackles or hiss and a solid representation of the musical displays. There are really no concerns here about the audio quality and it appears to be a faithful transfer. English subtitles are also included.

The sole extra here is an audio commentary featuring writer Frank Ray Perilli and producer Charles Band, and both of them seem to be having a blast laughing at the film’s content and reminiscing about the experiences on-set. Charles Band has always been a good sport about coming back to talk about the films, and this commentary is worth a listen to here them crack up about elements of Adult Fairy Tales they see in hindsight.

There’s also a trailer on this disc as well as alternative cover artwork and a slipcover if you order from the 88 Films website. Overall, this is an enjoyable release with an okay transfer and a commentary that will warrant a second viewing of the film.