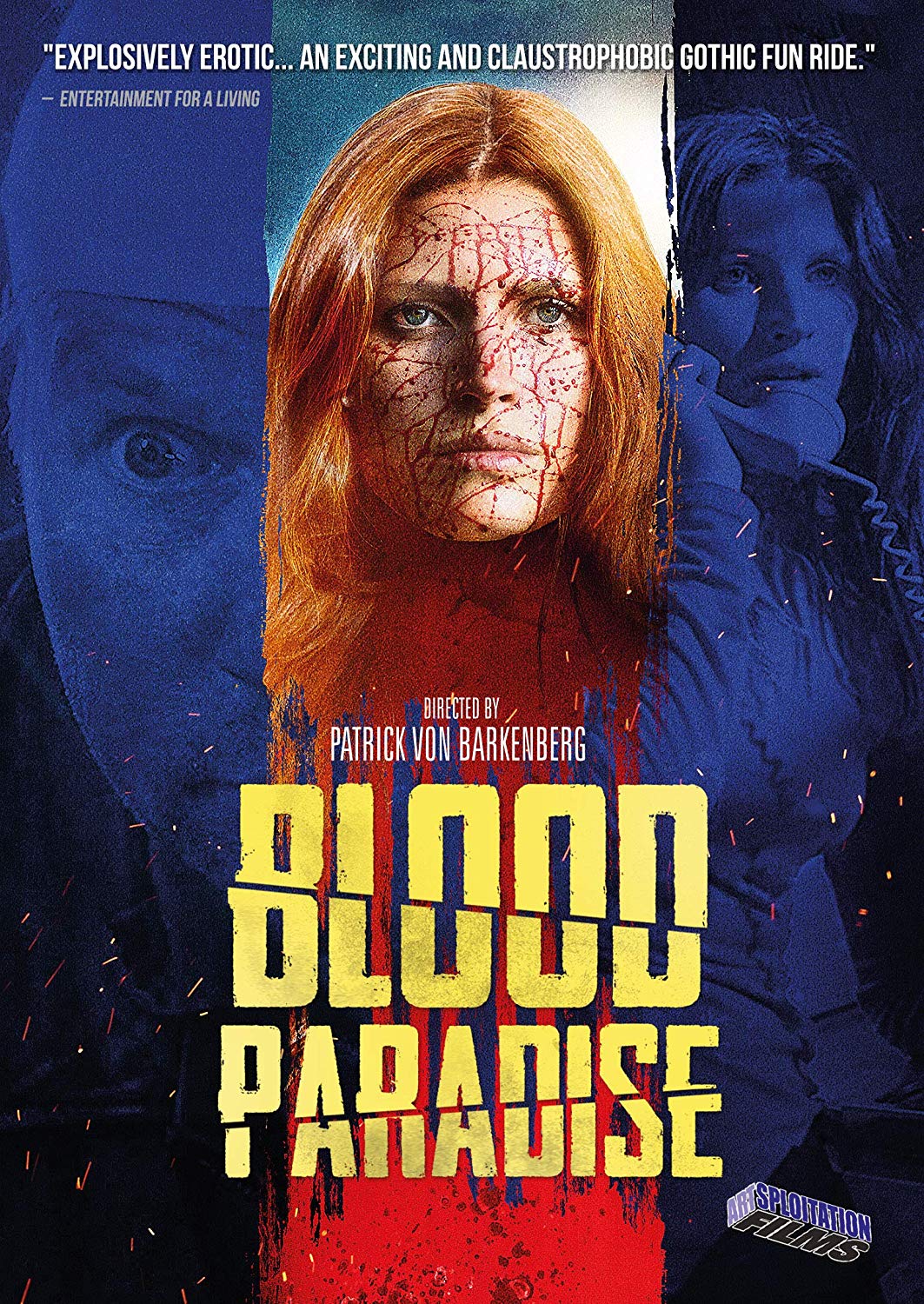 There are two things a movie can do that will guarantee I will watch it. The first is having a beautiful and sexy actress as the main character. The second is related to the first; the actress is willing to bare it all on film. If a movie has those two elements, the rest of the film can be shit for all I care. Blood Paradise checks off those two rules with ease, having Andréa Winter in the lead role, and she gets down and naked several times. A bonus point goes to the fact the film isn’t shit. It isn’t solid gold either, though.

Andréa Winter plays writer Robin Richards, who is suffering from a severe case of writer’s block. Her last book Return to Blood Paradise has bombed, and critics are wondering if she is all washed up now. Taking some advice from a friend, Robin heads to the countryside to relax and hopefully recharge herself and get back to writing. From the first person she meets – her biggest fan Hans Bubi (Christer Cavallius) – she starts to suspect something isn’t right about the place she is staying. The owner of the farm is an aloof farmer who is hiding a secret, his sister-in-law is not present mentally, and the farmer’s son is a shirtless leerer. When she isn’t struggling to write even one sentence, she passes the time-skinny dipping and avoiding being stalked by Bubi. As the vacation days pass, she begins to fear something might happen, especially when her boyfriend (director Patrick von Barkenberg) doesn’t show up as planned. Her investigation eventually leads to a disturbing discovery that puts her life at risk.

I wouldn’t blame you if you popped in Blood Paradise expecting an I Spit on Your Grave movie experience. The name, the cover, and synopsis all scream “revenge flick!” If that was something that got you excited to see Blood Paradise, prepare for disappointment. Sure, some revenge happens, but it’s mere minutes in the grand scheme of what comes before it. The story instead spends a lot of time following Robin and her wandering and snooping habits. I’m not going to complain because Andréa Winter is a competent actress who is super easy on the eyes. I know looks aren’t everything – personality, blah blah blah. Well, shame on you for thinking Andréa Winter is nothing but a woman who looks like a model, as she also co-wrote the movie, a couple of music videos, and has several credits in other areas. She’s also Swedish, so you know…

I do wish Blood Paradise would have sped things up a bit. It’s also strange that the weird quirkiness and humour that is conveyed at the beginning of the film seems to drop off about halfway through. If the film stuck with it until the end and turned things into more of a dark comedy, we could have had something special on our hands. Instead, it goes serious and eventually ends on a flat note. Story threads are dangling around, characters are cast aside, and everything that Robin fights for is wasted in those last few frames.

Artsploitation Films has released Blood Paradise on Blu-ray, which features a MPEG-4 codec transfer with a bitrate of roughly 32Mbps. The video transfer is pretty solid, with some nice even blacks and the sharpness of up-close shots shows off the details quite nicely. Audio is presented in Dolby Digital 5.1 and 2.0, which means no Lossless track is provided. I found the 5.1 sound to be on the low side, and the 2.0 was much louder. Neither was that great, though, as the film has some issues with sound in general, most likely due to the lower budget.

Plenty of deleted scenes, 4 in total, have been provided to check out. They don’t add too much to the plot, hence their deletion, but they do offer a couple more opportunities to check out Andréa Winter naked. You also have two music videos by Baby Yaga (Andréa Winter), with Dreamer seemingly being the inspiration for Blood Paradise or at least shot at the same time. Finally, you have the trailer.

For someone who hasn’t acted in a whole lot, Andréa Winter sure knows how to carry a film. She is the saving grace of Blood Paradise, a film that wants to be one thing and then decides to squander it all. There is some fun to be had, especially in the early humour, and the third act ups the ante in terms of horror, but the ending fails to impress. Nevertheless, Artsploitation has provided a solid Blu-ray for the fans.

Blood Paradise is held up by Andréa Winter's competent acting. The story is interesting, but the ending fails to impress. Artsploitation releases Blood Paradise on a solid Blu-ray that will please fans.
Film
Blu-ray
Reader Rating0 Votes
3
Buy
Amazon
Hosting screenshots is expensive. If you want to see more galleries, consider donating!