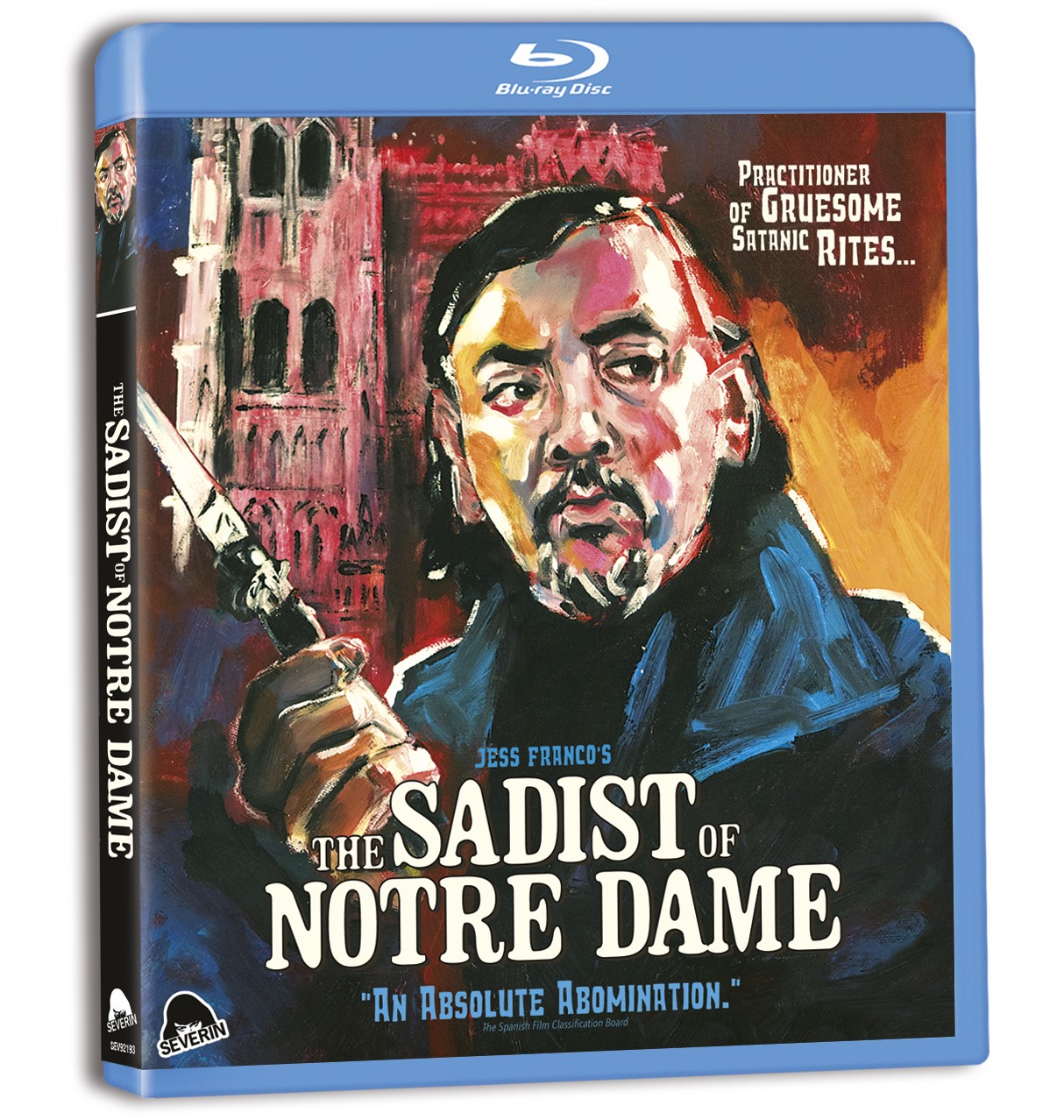 The Sadist of Notre Dame Summary

Mathis is a defrocked priest from the Catholic church who has begun to question his faith after a series of sexual encounters leave him both titillated and enraged. Mathis finds that all sinners need to be punished, but he’s also a sinner himself, which leads him into a delusional killing spree wherein he attends orgies and subsequently murders everyone who participates in sinful acts. With this sadistic killer running around Notre Dame, the police are out in full force looking for the man responsible for the reprehensible acts; will Mathis eventually turn himself in and repent for his own sins?

Jess Franco is notable for the sheer amount of films he wrote and directed in a relatively short timespan. Part of that workload came from re-cutting existing films into a different, sometimes more coherent, movie; that’s exactly the case with The Sadist of Notre Dame, Franco’s second try at a religion-based ripper movie about a devout Catholic man murdering sexually-deviant men and women in Paris. Exorcism was the original movie from Franco in 1975, but the director took much of that film and recreated it into The Sadist of Notre Dame by re-dubbing and shooting additional footage to flesh out some of the story (it would again be made into the hardcore movie Sexorcismes). The result is an interesting look at Franco’s filmmaking process, even if the film itself is not as successful as Franco might hope.

The film follows Franco himself as the main character Mathis, who is effectively a great representation of the internal struggles of a man born of Catholic faith and working in film genres that would be considered unsavory to most devout worshipers. Here Mathis is a stand-in for Franco as director in much the same way Lucio Fulci casts himself in A Cat in the Brain – something of a voyeur, considering the juxtaposition between religion and smut. It’s an interesting dynamic that comes up again and again within the film as Mathis gazes both disgustedly and longingly at various displays of kink, from orgies to lesbian romps, or when he’s doing some shoegazing on the streets of Paris and contemplating his life’s work.

The film oscillates between moments of existentialism and gratuitous nudity, and in a lot of ways The Sadist of Notre Dame still feels like a poorly-edited version of what could have been a better film. Franco’s additional characterization for Mathis is welcome and adds a bit of context to the story, as does the police investigation that comes and goes sporadically throughout; but overall, many of the scenes feel either ill-placed (and as is the case, cut from something else), or they’re far too long. Franco has a tendency to draw scenes out to unnecessary lengths, sometimes for titillation like an extended orgy scene or for atmosphere on the Paris promenade. The Sadist of Notre Dame would be much more enjoyable at a truncated 70 minute running time, perhaps eliminating some of Exorcism‘s unnecessary footage and replacing it with the story-driven shots that Franco crafted for this release.

Ultimately, the film is an interesting experiment from Franco that works better as a metacritical work, saying quite a bit about filmmaking and its author. Despite excessive nudity and a couple of intentionally shocking murder sequences, The Sadist of Notre Dame is far too slow to call it entertaining. But viewers will glean a lot from Franco’s decisions to involve himself as the killer, as well as his constant vacillations between religion and sexuality. It becomes a statement about the filmmaker, one that cult film fans should see at least once.

The Sadist of Notre Dame does not feature a lot of violence but when it does, it’s pretty brutal. There is a vaginal stabbing and quite a few normal stabbings as Franco murders every sexual deviant he comes in contact with. The blood is fairly mild, but the sexually-charged motivation of the film is what provides most of the shocks.

Severin Films was able to do a 4k scan of The Sadist of Notre Dame thanks to a elements found in a nunnery (that makes perfect sense for this film), although there is a disclaimer at the beginning of the Blu-ray documenting the particular limitations of the source material. The transfer is certainly not as pristine as previous Severin works due to source damage, but the image is still quite astounding regardless of the issues. Severin has been able to remove a lot of damage and decay from this release, though some cigarette burns and other elemental damage do remain. The grain presence is semi-heavy but never an issue, and clarity is quite good. There are a number of wobbly scenes, but ultimately this is probably the best The Sadist of Notre Dame will ever look, especially considering its already limited appeal.

Severin has included three different audio tracks for the film; all are DTS-HD Master Stereo audio, presented in either Spanish, English, or French languages. The best of the three is the Spanish track, which features the most nuanced sound, and then the English track with a slightly worse presentation, and then finally the French with the most distortion. The Spanish comes with English subtitles, while the English gets closed captions. Both the Spanish and English sound pretty good (though certainly not fantastic) and I’d recommend sticking with either of the two.

Severin Films has assembled a nice set of special features on this release. There’s a half-hour documentary on the Le Brady Parisian cinema which goes into detail about its boom in the ’70s, its arthouse showings, and then its downfall. Also included is a half-hour discussion with Stephen Thrower about the film, who again delivers an enlightening visual essay about the film’s production and insider insights into Jess Franco’s intentions. Robert Monell gives about six minutes of audio commentary on selected scenes from the film – the quality is a bit spotty, though. Finally, there’s a five minute interview in French from Alain Petit, who talks about the production in detail as well (and mentions his thoughts on the quality of the picture).

This is a surprisingly packed disc from Severin Films and definitely recommended for the Franco fan, both because of its metacritical nature and its odd context within his filmography as well as its bonus content.