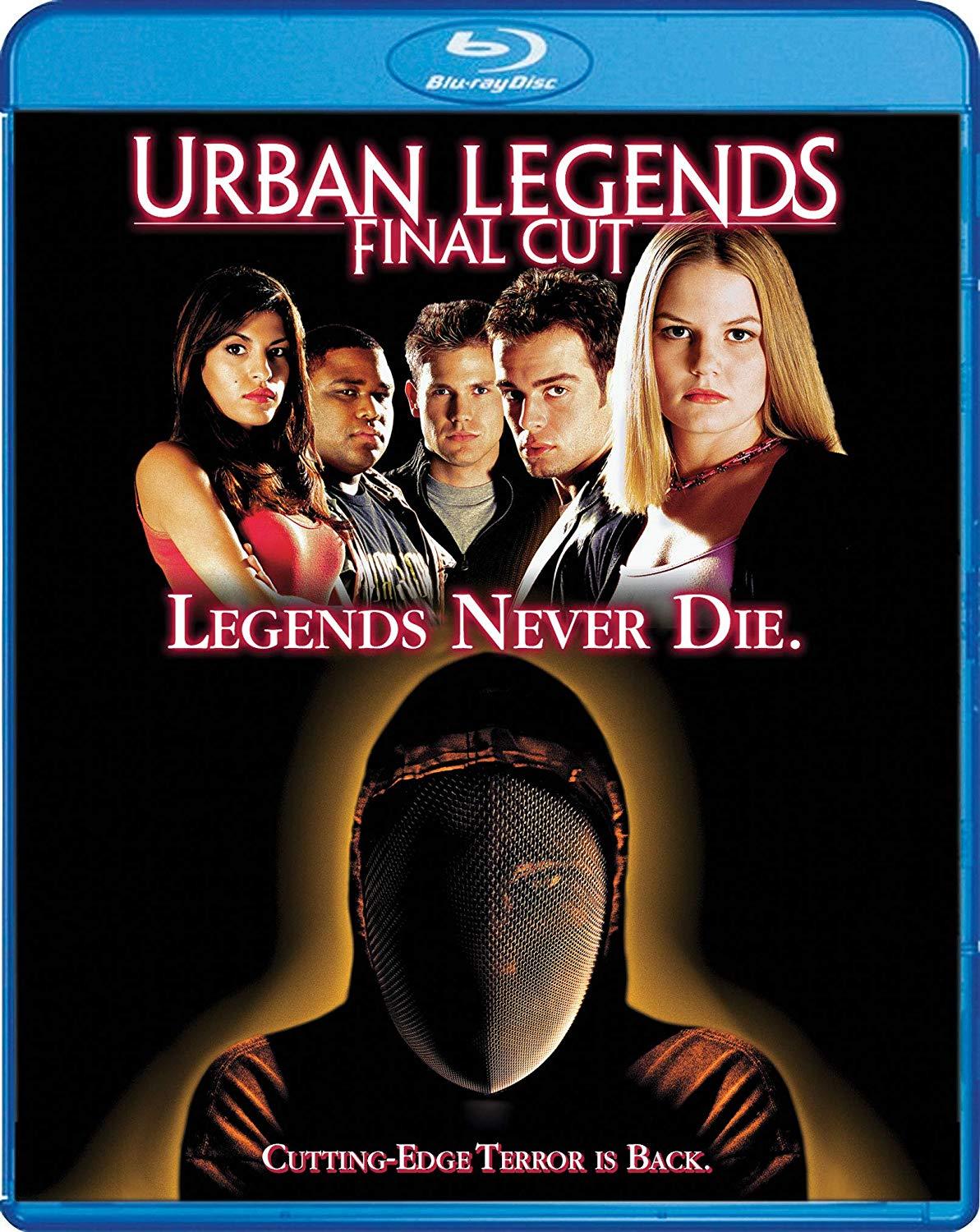 Urban Legend was a surprising success that capitalized on Scream‘s popularity while adding something new to the revitalized slasher genre, and it paved the way for a number of films in the late ’90s and early ’00s. It also gave producers reason to green-light a sequel, albeit with most of the cast and crew from the original gone. John Ottman takes over directing duties for the pluralized Urban Legends: Final Cut, a pseudo-sequel that finds a new group of kids at film school terrorized by a killer, this time in a fencing mask, who is targeting people associated with Amy Mayfield’s (Jennifer Morrison) urban legends-themed film project.

Unfortunately, Urban Legends does not live up to the original in any way. The essence of that film – a killer committing murders that resemble classic stories – has largely been replaced with a much more generic idea; the urban legend aspect is simply related to Amy’s school film project rather than the murders themselves, and while some of the kills are still memorable, the excitement of seeing a chilling urban legend played out on-screen is missing. Instead, Urban Legends: Final Cut is fairly predictable throughout, following the normal slasher beats one by one up until its twist ending.

The writing is all over the place, but most of it is just plain terrible. At one point, the headmaster of this prestigious film school even delivers a speech about a student committing suicide, stating that the recently deceased disappointed not only himself but all of his peers. Damn – that’s a pretty bold statement! There are also secret twins, a random German guy, lesbians, and two guys who constantly deliver movie trivia and then severely underestimate their own dangerous situation. That’s Urban Legends: Final Cut checking off all the boxes.

The movie is also saddled with unlikable characters (Joey Lawrence – sorry man, should’ve just stuck to Blossom), an unenthusiastic final girl, and a number of stupid plot elements along the way. The metacriticism feels stolen from Scream 2, and even the opening film-within-a-film sequence is more of a waste of time than an homage to Final Destination. It should be clear to most viewers that Urban Legends: Final Cut is a cash-in more than an inspired follow-up to the original, and if the film still hasn’t swayed audiences, then Urban Legend screenwriter Silvio Horta’s reticence to even be involved with the production should explain things.

Urban Legends: Final Cut has the same missteps most slasher sequels suffer from: a lack of vision, a misunderstanding of the first film’s successes, and a monetary motivation. Overall, the film isn’t a horrible production, but it’s – maybe more disappointingly – an uninteresting movie. The filmmakers should have gone with a different final cut.

The Scream Factory Blu-ray is not a Collector’s Edition like its predecessor and that’s primarily because it does not get a new transfer for this release. Instead, Scream Factory reuse Sony’s previous HD master, which still looks quite good overall; there are really no major issues with the picture quality, with good clarity, natural grain, and consistent contrast throughout. The film also gets both 5.1 and 2.0 DTS-HD Master Audio, neither of which have any problems.

Extras are somewhat limited but the best new feature is a sub-20 minute making-of special that rounds up producer Gina Matthews, Michael McDonnell, Nick Osborne, Brad Luff, Mike Medavoy, Urban Legend writer Silvio Horta, and actors Loretta Devine and Rebecca Gayheart. Some of the producers seem to have rose-colored glasses about the whole production, but some of the others seem to understand Final Cut‘s less-than-stellar quantity; it was also nice to see Gayheart back for a brief discussion of her cameo. The other new addition to this release is an interview with Jessica Cauffiel who plays Sandra in the film; it’s entirely possible she was the only person besides Gayheart and Devine who would come back to talk about the film. She gives a 16-minute conversation about her work on the film, her background in theater, and that awkward sex scene in the plane bathroom.

Other extras include an audio commentary with director John Ottman, deleted scenes, goofy outtakes, a very brief archival making-of featurette, and a trailer. Interior artwork is a still shot. Overall, this is a good Blu-ray if you absolutely must own Urban Legends: Final Cut on home video; others with only a passing interest in the movie should probably skip.

The ’90s are over, and the slasher craze is dying down, but that didn’t stop the makers of Urban Legend to come up with a sequel and release it to what would become lukewarm audiences. Urban Legends: Final Cut, also known as Urban Legend 2 and worst of all, UL 2, came out in 2000, bringing back hardly anyone from the original, save for Loretta Devine and a quick cameo from Rebecca Gayheart. Does Final Cut make, ahem, the cut or was the success of the first a one-time occurrence?
Final Cut has the story taking place at a prestigious film school, as we follow student Amy Mayfield (Jennifer Morrison), who is trying to complete her film project about urban legends, inspired by campus police officer Reese (Loretta Devine), who tells Amy about the events of the first film. As Amy works on her project, a killer shows up to slash some bodies. A few of the murders are inspired by some fun urban legends, with the kidney bath murder being the highlight, but a majority of the kills are your standard slasher affair, which is a damn shame.

It isn’t just lame kills that are the problem with Final Cut; it also feels cheap and forgettable. I’m struggling to remember it, and I just watched it a couple of days ago. Eesh! The more I stare at my screen, the memories of what I saw slowly drift away into obscurity. Be it the bland characters, the meh setpieces, or the multiple cheesy endings, Urban Legends: Final Cut is a movie I can easily pass on.

Okay, we can tell I didn’t like the movie, but let’s dive into the newest Blu-ray from Scream Factory. The sequel to Urban Legend doesn’t get the Collector’s Edition branding, but it still features a solid video presentation, which I assume is the same transfer from the Australian release from Via Vision Entertainment. Audio provided is English 5.1 DTS-HD MA, English 2.0 Stereo DTS-HD MA, and I have to say the 5.1 soundtrack dialogue sounded low to me, forcing me to raise the volume to hear the actors’ terrible dialogue and then quickly lowering the volume during an action scene. Very annoying.

As for extra features, we get a 17-minute making of that features interviews with Producers Gina Matthews and Michael McDonnell, Executive Producers Nick Osborne and Brad Luff, Chairman and CEO Of Phoenix Pictures Mike Medavoy, Writer Silvio Horta, and Actors Loretta Devine and Rebecca Gayheart. Although not as impressive as the Making-of on the first movie, it still provides enough information to satisfy fans(?). We also have an interview with actress Jessica Cauffiel, who plays the bimbo blonde in the film. She isn’t in the movie as much as the other actors, but she does have enough to talk about for the feature to last almost 17 minutes(!). The remaining features aren’t new but welcome nonetheless. They include an audio commentary with director John Ottman, deleted scenes with optional director commentary, a gag reel, a vintage making of, and finally a trailer.

Urban Legends: Final Cut is not a great film, and it pales in comparison to the first film. There is just something off about the film, be it the lame kills, the bland story, and the stupid ending I won’t ruin for you readers. Nevertheless, if you want to own the film on Blu-ray, Scream Factory has what you are looking for if you’re going to torture yourself.

Urban Legends: Final Cut is a pale imitation of the first film, with a slasher plot that only tangentially involves urban legends. The Scream Factory Blu-ray is good but far from vital for those not in love with the movie.
Ryne: Film
Ryne: Blu-ray
Michael: Film
Michael: Blu-ray
Reader Rating1 Vote
3.6
Hosting screenshots is expensive. If you want to see more galleries, consider donating!