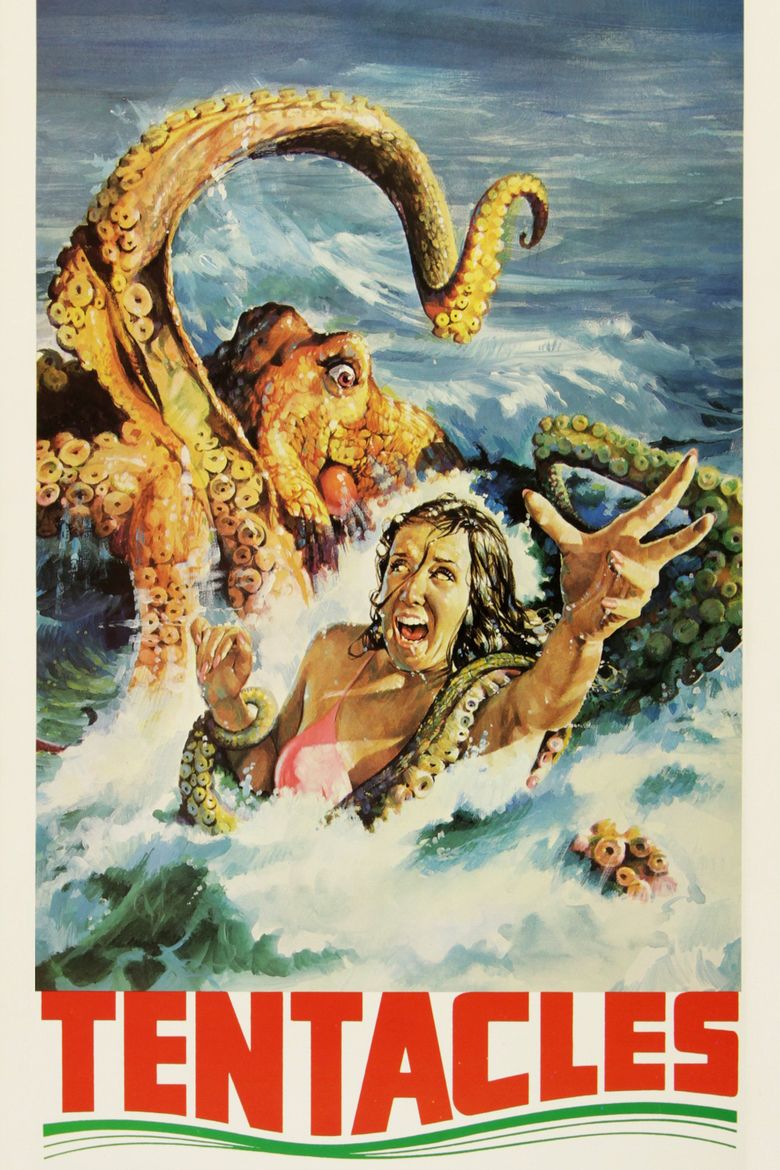 The California seaside community is thrown into despair as residents become victims of a giant octopus patrolling the area, attracted by illegal radio usage during construction of a new tunnel. The octopus has mutated and it is mad – so local reporter Ned Turner calls in marine expert Will Gleason to bring his killer whales, hoping that by some miracle they can get rid of the beast before it kills off all of the oceangoers.

Jaws released in 1975, to critical acclaim. Tentacles was hot on its heels in 1977, one of the first rip-off films to try to capture the same viewer appeal (Orca being another around the same time). But one has to credit the film’s writers – the trio Jerome Max, Steven Carabatsos, and Tito Carpi – for at least attempting to think outside the marine wildlife box, crafting a narrative around a giant mutated killer octopus rather than the usual shark or whale storyline. Tentacles is a combination of Jaws‘ more realistic shark attacks and the 1950s’ obsession with nuclear, mutated animals; and Ovidio G. Assonitis attempts to generate a compelling plot while sticking to the things that made Jaws a smash hit.

The movie follows John Huston’s character Ned, a reporter who latches on to a couple of seaside murders – he realizes they’re not normal deaths, but seem to be consistent with some giant creature from the depths. He reports the incidents to his marine friend Will (Bo Hopkins), who travels to the area to figure out what’s going on. While Will’s not much help for the most part, he does manage to solve the crisis in the end – just after the death of his wife, sister-in-law, and a bunch of other people.

Tentacles has an interesting premise, or at least one that makes a modicum of sense. There’s the usual environmental theme going on here, with both Ned and Will outraged at the illegal things going on with Mr. Whitehead’s (Henry Fonda) tunnel excavation.  All of that leads to the film’s main conceit: the octopus is attracted to radio signals, a common thing used at sea to prompt rescue. As the characters attempt to call in their SOS, the octopus becomes even more enraged. It’s a nice twist to the formulaic approach to the story.

However, despite the film’s star-studded cast (seriously though, how did Assonitis get all of these actors in this film?), Tentacles suffers from something that kills B movies: it’s often quite boring. A lot of scenes devolve into exposition, and when the octopus does attack, Assonitis films it with little regard to the action itself. Most of the death sequences involve people on the water, with a shot of fake tentacles underwater before the victim gets pulled under. Tentacles lacks the tension of Jaws but also the exploitative element of other ripoff films; it’s also got a really bad octopus prop.

With that said, some viewers will find unintentional humor in the plot progression. The film takes itself fairly seriously, with much of the focus on Will’s loss of his wife; however, other key scenes that should be suspenseful wind up becoming overly comical. Killer whales used to hunt and kill the octopus? Hilarious! Shelley Winters even plays the mother of a young boy when she would have been 57 at the time. There’s a ridiculously long montage of a sailboat race. Assonitis, who directed a much better film, Madhouse, just four years later, seems to have misunderstood the point of the type of B-movie that Tentacles wants to be.

Unfortunately, the film’s a tough recommendation because of all its flaws, but as my co-writer Michael pointed out to me, it does have a curiously catchy score. It’s not enough for me to think highly of Tentacles, but it certainly does help offset the monotony.

The violence is tame, mostly because it’s clear that Assonitis didn’t have great special effects to work with. A lot of the attack scenes take place off-screen, showing only creeping tentacles or the incoming threat.

Surprisingly none, although Delia Boccardo does show some nice cleavage in a bathrobe, seemingly defying physics without a boob slip.