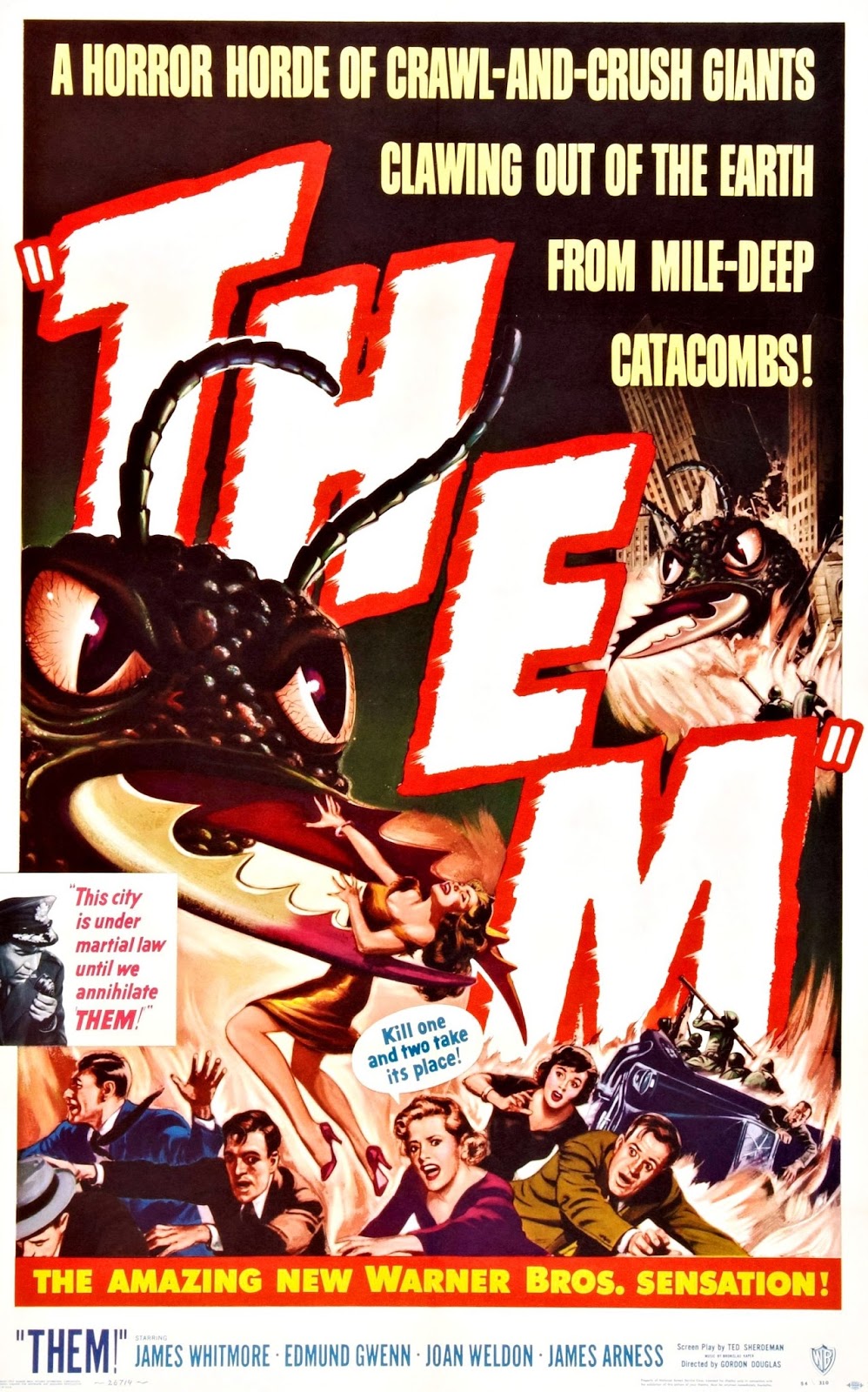 Giant ants have appeared in the desert after irresponsible nuclear bomb tests in the ’40s left the area irradiated, and they’ve now become killers scavenging for food. Police Sgt. Ben Peterson and Drs. Patricia and Harold Medford are called in to investigate, and they discover that the ants have already laid eggs and moved on to more locations. If they don’t stop the nests from spreading, the entire world will soon be overrun with the giant monstrous THEM!

Often cited as the epitome of ’50s nuclear science fiction films, Them! has become a staple of the era and the giant animal genre; that’s partially because it features almost all of the defining aspects of nuclear-age monster movies including the aforementioned atomic bomb, but also because it’s possibly one of the best examples. Gordon Douglas’ 1954 classic may not have the most interesting monsters, but its thematic ideas stand tall: even the smallest things could potentially kill us if left unchecked.

Throughout Them!, the thought of nuclear winter is apparent, and often Ted Sherdeman’s screenplay tells us so; there’s no mincing words about atomic bombs here, as all of the characters remark about the dangers of radiation and the impending Cold War threat (there’s even a quick piece of dialogue from the news stating, “Has the Cold War gone hot?” which is pretty clever). While Sherdeman’s script is a little too on-the-nose at times, the most interesting element of the film is its liberal stance towards science while also eschewing the dangerous elements of developing weapons of mass destruction.

That’s all couched in the variety of characters that the film utilizes, including two doctors – both the Medfords (Edmund Gwenn, Joan Weldon) are already hip to the irradiated animal element – an FBI agent (James Arness), and a police sergeant (James Whitmore). Thematically, these people represent the different elements of nuclear Armageddon: the scientists who develop said bombs and the potential officers who carry out war. Interestingly, Them! finds these disparate people coming together to clean up the messes of atomic bomb usage, first figuring out the problem and then devising a solution.

The ants are, as expected, not really a scary threat to modern audiences, but Douglas’ direction emphasizes the terror of the science fiction element. The film is surprisingly tense at the beginning as Peterson and his partner investigate two related emergencies in the New Mexico desert, slowly uncovering more and more weird aspects of the crime scenes. A later sewer scene located under Los Angeles continues to provide a creepy vibe as the army makes their way into the ants’ lair, hoping they’re not too late to stop the spread of more winged ants from colonizing other parts of the world.

Many contemporary viewers might find Them! laughable now, but thematically, the film’s context adheres close to our current doomsday predicament. Then, audiences would have known the immediate threat of nuclear obliteration and feared the unknowable potential of unchecked radiation – in short, the ideas presented in films like Them! might not have seemed so outlandish. Now, though most people aren’t ducking under metal-lined desks or jumping into bunkers every day, there’s still an overwhelming unease throughout the world, and Them! is both a vestige of the past and an uncomfortable reminder that we haven’t come very far in over half a century; in fact, we might be worse.

There’s not much explicit violence, but Peterson’s demise looks pretty terrible all the same – he gets caught in an ant’s pincers and subsequently dies, either because of crushed organs or (unseen) blood loss.

None – though we could blow each other up with nuclear weapons, we were pretty prude back in the ’50s.