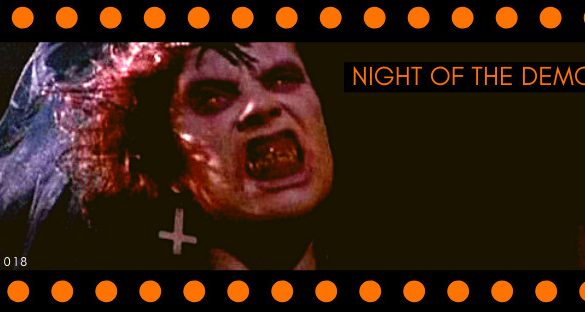 Cultoween 2018: NIGHT OF THE DEMONS

1988’s Night of the Demons was an undeniably successful formula: set the film on Halloween, follow a group of comely co-eds to a spooky funeral parlor for a party, and let the fun begin as demons slake their bloodthirst. Ultimately, Kevin Tenney’s film is a cross between Lamberto Bava’s similarly-titled Demons and The Evil Dead, and for cult film fans, that’s a perfect combination.

The creepy Halloween festivities make their appearance early in the film thanks to Judy (Cathy Podewell)’s brother bursting out of her closet with a scary mask while she’s changing, but the film never really forgets that it’s All Hallow’s Eve. Skimpy costumes are the norm here, most notably when Linnea Quigley’s character bends over and waggles her butt at two clerks in a convenience store while Angela (Amelia Kinkade) robs them blind. We also get a number of trick-or-treating shots and some great decorations in the Hull House funeral parlor to set the stage for things to come.

Night of the Demons’ first half hour is sort of tedious, though, especially because it’s fraught with frat bro humor and setup. Once the demons come out to play, though, Tenney finds some good pacing and some surprisingly creepy scenes in this horror film that plays out more like a comedy – in many ways, this is the primary element that seems inspired from Evil Dead. Demon Angela haunting down a hallway is particularly creepy thanks to the atmosphere of the film, and even if the intent is mostly comedy, it still works on multiple levels.

The best thing about Tenney’s film, though, is that it’s a lot of fun once it gets into its demonic possession elements. It focuses on the stupidity of its unlikable characters and features some clever uses of violence, and that’s not to mention the ample sex and nudity throughout. The demon makeup is quite good as well in much the same vein as Bava’s Demons.

Despite a rough start, horror fans will love the slasher elements at play in Night of the Demons and it’s certainly a good pick for a Halloween party – it’s cheesy, sexy, with just the right amount of Halloween atmosphere to make it stand out on a blustery stormy night.