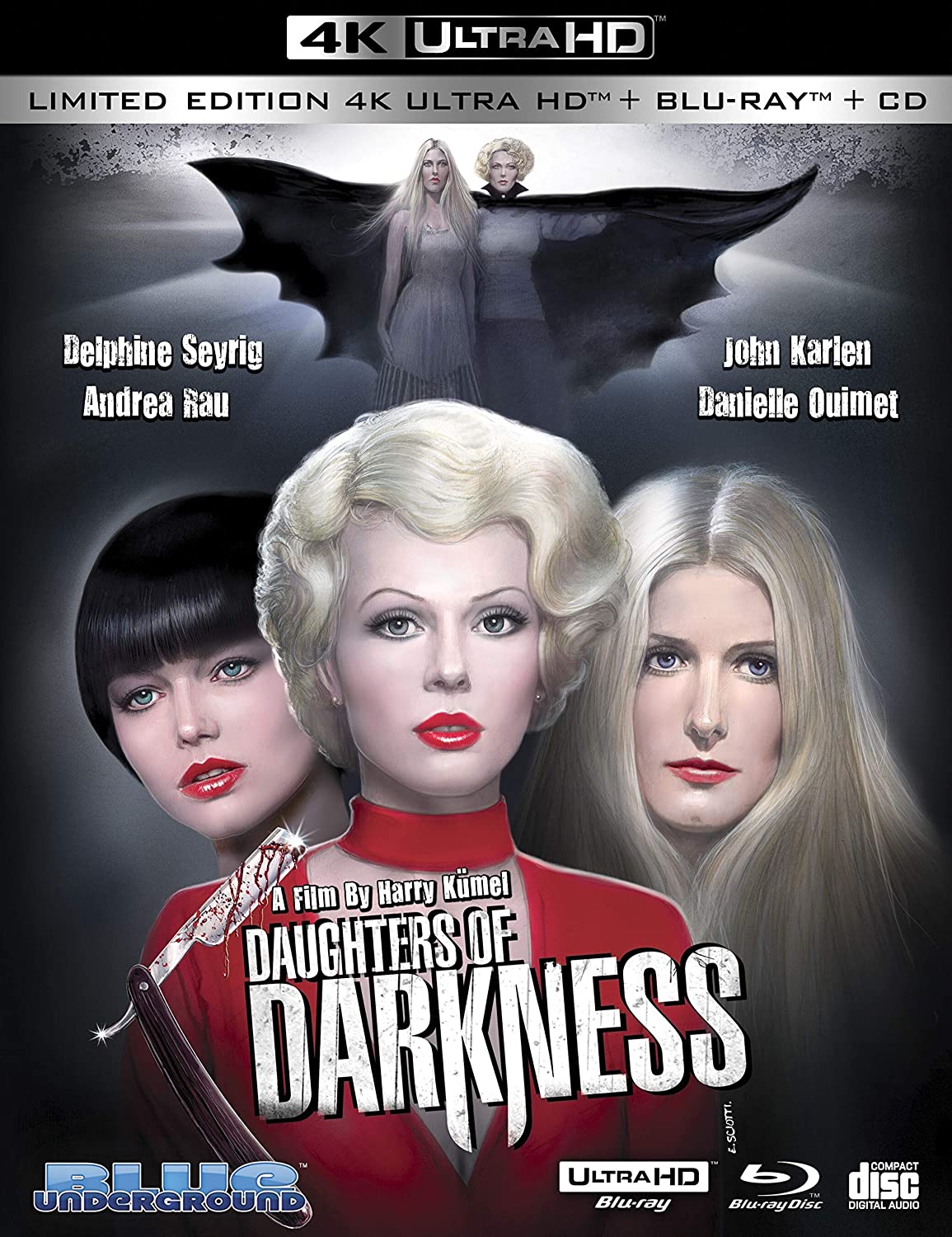 Daughters of Darkness is a vampire film, though the majority of its running time seems to defy classification as such. It intentionally leaves out all of the familiar tropes, touching on them faintly without explicitly discussing them: it’s got a mysterious stranger, eroticism, an apparent master/slave dynamic, and subtle intonations about its characters’ sunlight allergies. But director Harry Kümel’s film has been referred to as a “classy lesbian vampire film” for a reason; it’s less horror than surreal art, for the most part, and it uniquely maneuvers around the common cliches of undead cinema to provide an experience unlike any other in the genre.

The film centers around newlyweds Stefan (John Karlen) and Valerie (Danielle Ouimet), who have honeymooned their way to a Belgium hotel only to discover their sole roommates are the mysterious, dominant Countess Bathory (Delphine Seyrig) and her meek counterpart Ilona (Andrea Rau). From there, Valerie learns her husband is not the man she first thought he was, what with his bloodlust, interest in dead female bodies, and his reticence to introduce her to his “mother.” And Bathory also takes a strange interest in the two of them, particularly Valerie after she attempts to leave Stefan after a domestic abuse incident.

Kümel does a great job of setting up an eerie, off-kilter atmosphere despite the film’s relatively familiar setup. The abandoned hotel sets the mood, but it’s really the interplay between the characters that provides the most nuance. Seyrig is excellent as Bathory, who exudes sexuality and eroticism simply by being on-screen; but the playfulness she engages with Valerie and Stefan pushes things over the edge, especially in an excellent sequence where both Bathory and Stefan start listing off the disturbing violence the original Erzebet Bathory is purported to have committed right in front of Valerie.

These moments are slow and methodical, which is Daughters of Darkness‘ pacing throughout its entirety. For the most part, the film centers on mundane elements like traveling, dining in the hotel’s restaurant, or having breakfast in bed. But sprinkled into these moments are bizarre revelations about character, like Stefan’s assumed gay lover or his penchant for abusing women. The idea of corruption is certainly at play; while Kümel never makes it explicit, there is a running theme that Bathory could be a corrupting agent for the two lovers.

Or is she? Daughters of Darkness never truly answers this question, allowing for the viewer to make their own determination. Does Bathory corrupt Stefan into abusing Valerie, or was he always capable of this behavior? Likewise, does Bathory empower Valerie, or rather enslave her to do her own bidding? The film forces the viewer to question what is inherent in its characters from the beginning of the film that we might not immediately know – including gayness and lesbianism. Corruption is a human condition, one that resides in our main characters and possibly goaded into being by Bathory.

Contemporary viewers may find Daughters of Darkness a slow start, but let the seduction wash over you and I guarantee it will conjure a thought-provoking experience. Its surreal artistic elaborations truly come to fruition in its chaotic final minutes. Like Bathory herself, bathe in the blood of this early ’70s vampire gem.

Blue Underground has previously released Daughters of Darkness on Blu-ray back in 2011, but like their recent restorations of Zombie, The New York Ripper, Maniac, and The House by the Cemetery, they have gone back to the drawing board with a new scan in 4K 16-bit from the original camera negative for this new 4K UHD package. The results are absolutely astounding. The level of clarity is unreal, with excellent detail that shows just about every bit of information you could want on the screen. Background signs are legible, beard stubble is apparent, and clothing textures are consistently fantastic.

The DolbyVision HDR is truly a sight to behold; Daughters of Darkness is aided by the color vibrancy, making use of purple, blue, and red hues to full effect. Despite the excellent detail, this element alone might be the most impressive.

Grain is well-managed and minimally noticeable. There’s no dirt, debris, or damage visible. It’s hard to imagine the film looking any better than it does on this Blue Underground 4K UHD.

Blue Underground gives a number of audio choices including a Dolby Atmos track as another excellent option for audiophiles. While I don’t have the tech to take advantage of the Atmos, this still sounds great with some minor usage of satellite speakers for ambient sound. Also available is a DTS 5.1 and 1.0 mono track which also sound great, and a French 1.o mono track too. Subtitles are available in English, French, and Spanish, as well as just English for the French audio.

Blue Underground has provided a number of new extras for this release of Daughters of Darkness as well as the ones from their previous Blu-ray release. Besides the audio commentary from director Kümel and another with John Karlen and David Del Valle, we get a third option recorded for this release by Kat Ellinger, who provides excellent information about the film – and that makes sense considering her fascination with it.

Also new to this disc is an alternate title sequence with a different title card; interestingly, I prefer the alternate from the one in the film. There’s also a new still gallery and theatrical trailers including a US, international, and French option. Interestingly, all the trailers are also in 4K.

Besides these new features, the disc sports the older interviews from the 2011 Blu-ray, including an interview with Kümel and Pierre Drouot, another with Danielle Ouimet, and one with Andrea Rau, along with radio spots.

Included in this package is the Blu-ray version of the film that does look a bit inferior to the quality of the 4K UHD transfer, as well as a new CD of the film’s soundtrack by François de Roubaix. There’s also a great collectible booklet insert featuring a new article by Michael Gingold on the film that adds even more value to this collection. Finally, this also comes with reversible cover artwork and a nice lenticular slipcover.

Even if you already own the previous Daughters of Darkness Blu-ray from 2011, this is absolutely worth an upgrade. The transfer is gorgeous, the extra features add more value to double-dipping, and the package contains a bonus CD and booklet to ensure this is money well spent. Recommended. 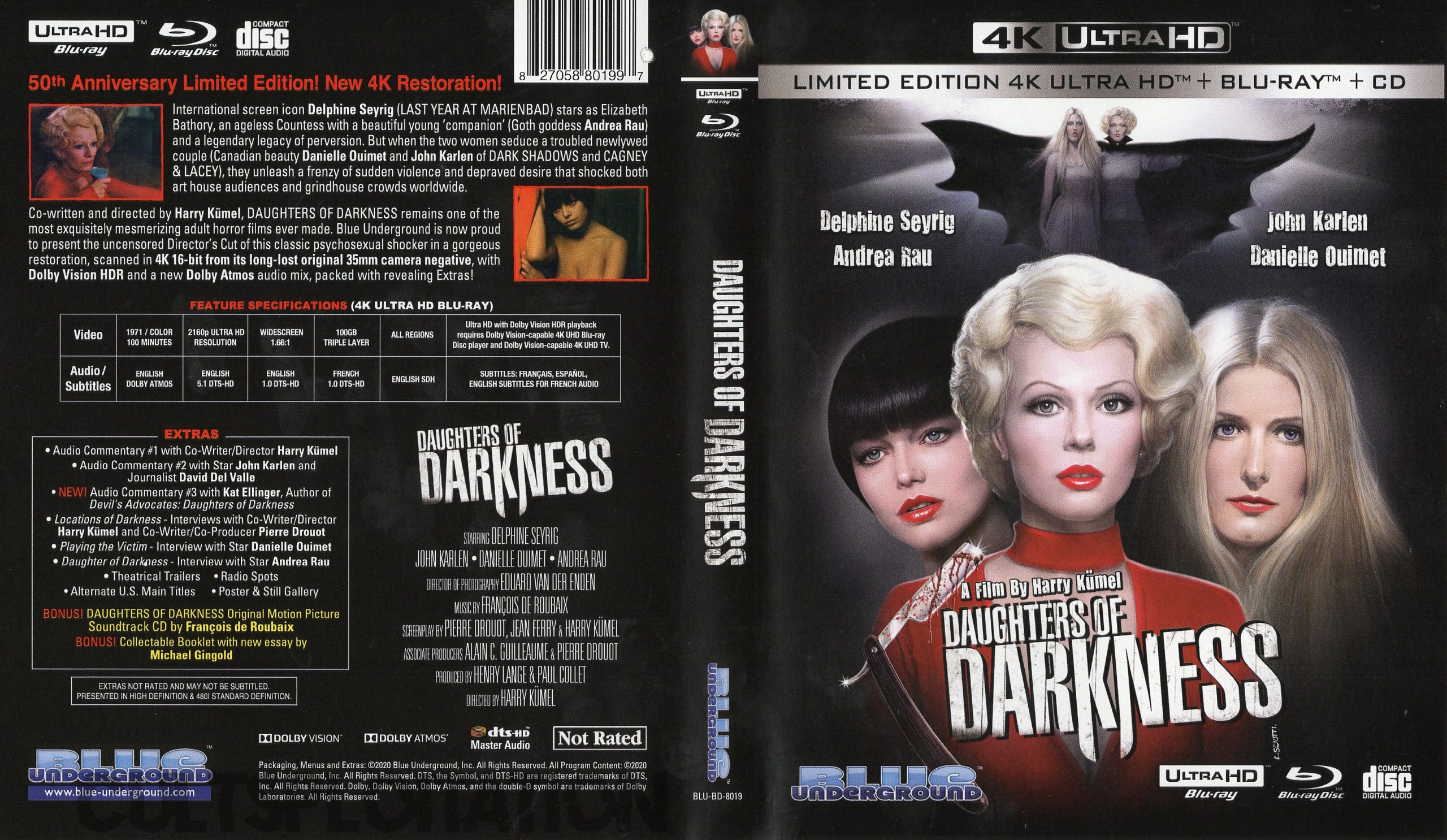 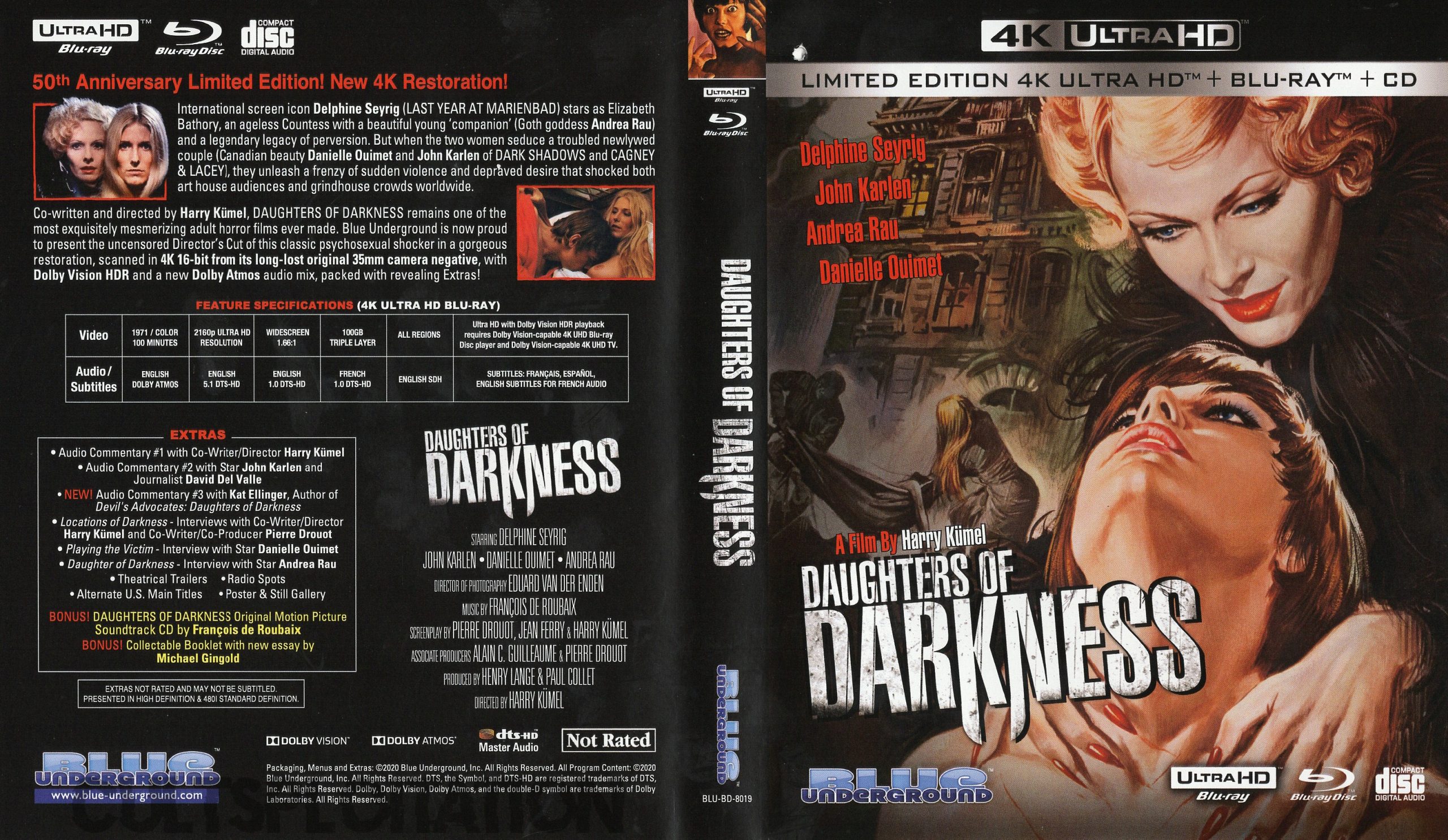 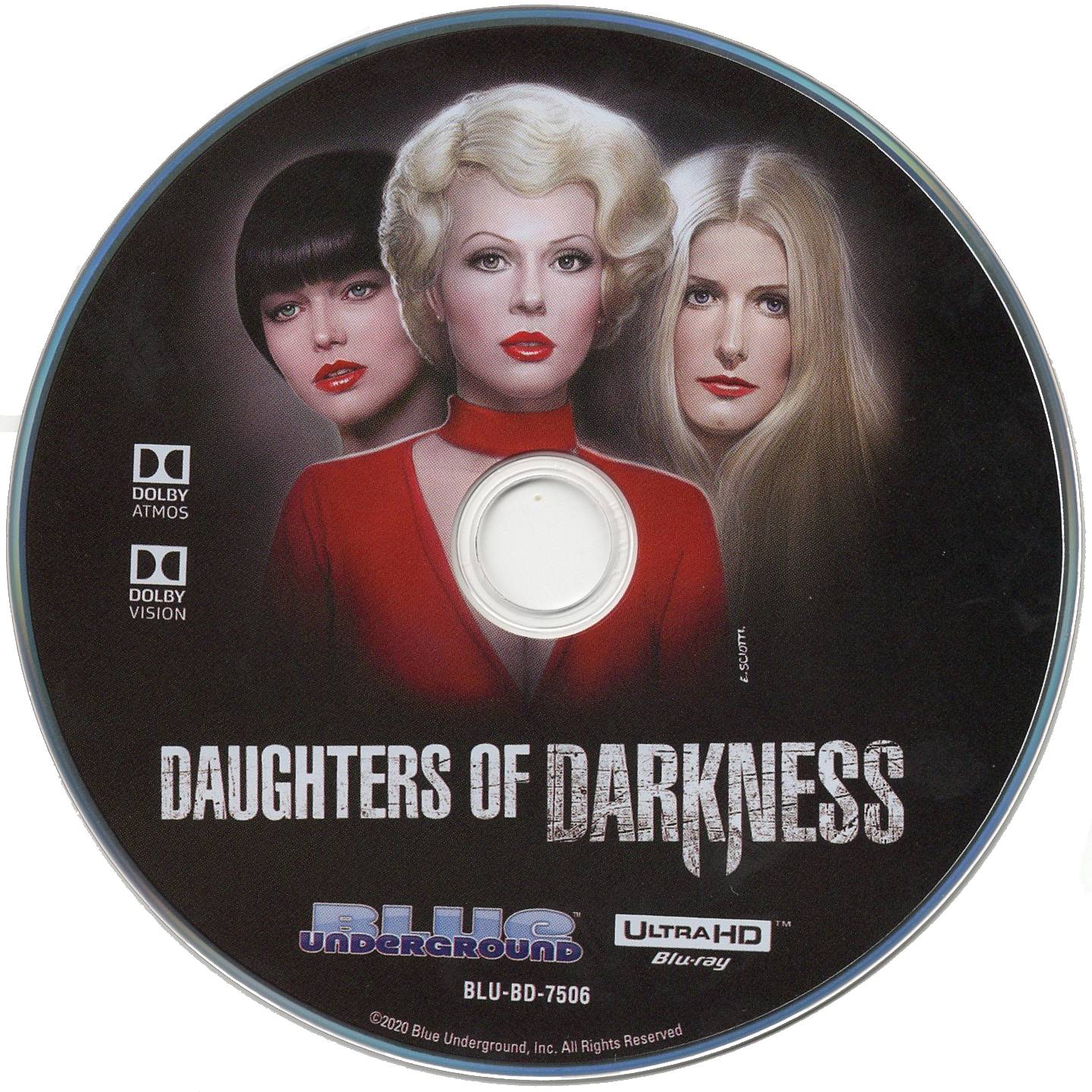