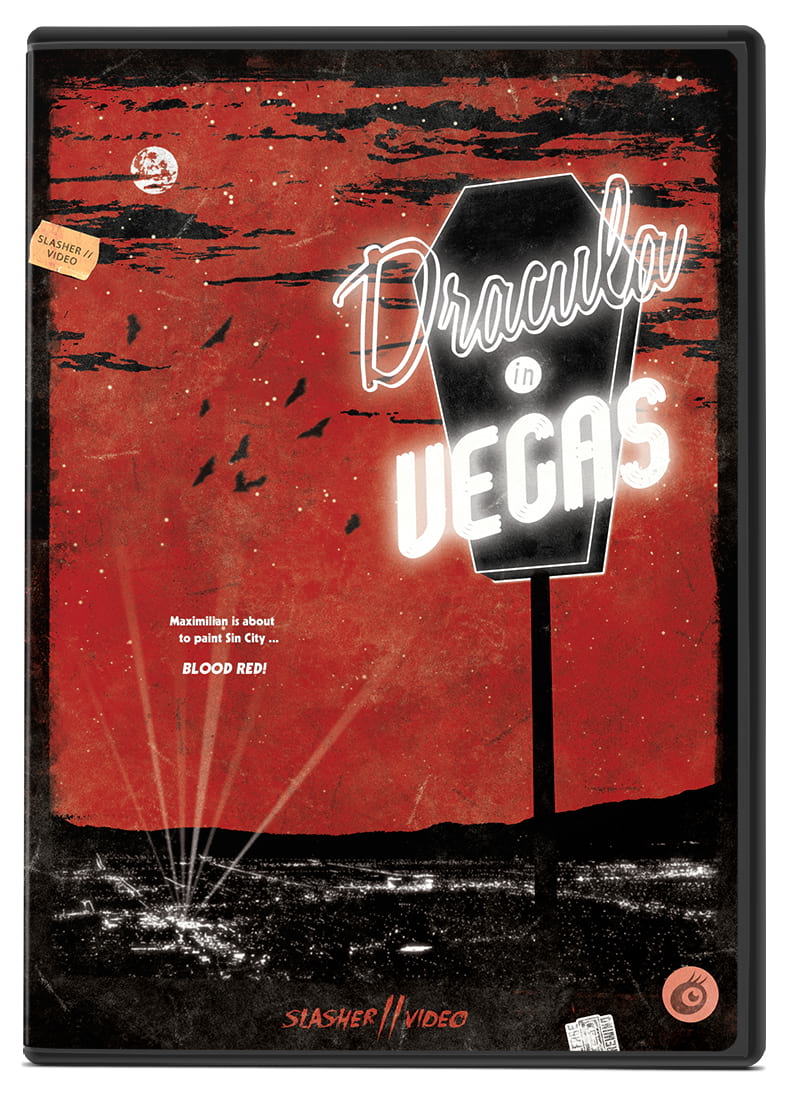 Max is a descendant of the Dracula line and he recently got accepted to Yale, Harvard, and the UNLV. While the first two are quite prestigious, he’s forced into attending UNLV so that he can create a bunch of love slaves thanks to his vampire bite. His parents are afraid that Max will get AIDS from regular human scum, but Max eventually falls in love with a woman anyway. Can he overcome his parents’ disappointment and live happily ever after with a normal human, and also survive trashy Las Vegas?

We live in an exciting time for film releases. All kinds of boutique companies are opening up and jockeying to release cult films with the best upgraded video and special features, and that helps revitalize some movies that have fallen by the wayside, especially those deserving a better transfer. However, that also means that all kinds pf claptrap gets picked up in the scramble. Slasher//Video’s Dracula in Vegas is a good example of the junk floating to the top: this low-low-low budget ’90s VHS release from director Nick Millard is rough, nonsensical, and clearly a product of the time, and for most viewers, the film will simply suck the life from them.

There are many flaws withing Dracula in Vegas, but the most glaring is the placid plotting. Max’s journey to Las Vegas to attend college should be exciting as he learns how to hunt young co-eds and use his bite to turn them into submissive slaves, but Millard’s direction emphasizes all the boring aspects of it. Max isn’t looking for food but for love and education instead, much to the chagrin of his parents – they’re concerned that he’ll contract AIDS and die if he falls for a normal human girl (yes, this is a big part of the film’s plot even though the AIDS situation should be more concerning to anyone who drinks blood).

Ultimately, though, Dracula in Vegas becomes a series of scenes with Max arguing with his family or nonchalantly biting women in public, and any of the suspense of these moments is lost because none of them really make any sense or develop an exciting character arc for Max. It doesn’t help that the actors are truly unable to do a good line-reading much less sell an emotional climax. Even at 63 minutes, Dracula in Vegas is a painful reminder that a film with vampires isn’t necessarily a surefire win, and I honestly can’t see many viewers getting any enjoyment out of the film besides the occasional chuckle at the actor’s expense.

Not much at all, unfortunately. There are a couple of bite scenes where blood trickles down lips and necks, but other than that, this is quite tame because of its budget restrictions.

Slasher//Video presents Dracula in Vegas in its best available quality, which is, as expected, not that great due to the film’s budget, presentation, and preservation. The film does look better than some of Slasher//Video’s previous SOV releases with a bit better clarity, but the biggest issue are the many moments where the picture stutters or pauses. There are also a few tracking lines throughout the film. Anyone who’s picking up Dracula in Vegas will probably expect the shoddy picture quality though.

Truthfully the audio isn’t bad at all and features no real issues. No problems with hiss, echo, etc.

The film features two surprising extras: an audio commentary with director Nick Millard, Irmi Millard, and Jesus Teran (from Slasher//Video) as well as a 17-minute interview with Nick Millard and his wife Frances Millard. I’d recommend watching with the audio commentary if only because the film’s dialogue isn’t that vital or interesting, and the interview with the Millards does give some good information on the making of the film itself. While neither of these features make purchasing the film itself worthwhile, it does add some value to the release. Also included are a photo gallery and trailer.

It’s hard to recommend Dracula in Vegas to anyone except hardcore cinephiles interested in seeing this hard-to-find horror film, but Slasher//Video certainly makes it cheap at $11.99 – consumers will just have to estimate whether they’re willing to waste the 63 minutes on watching it.