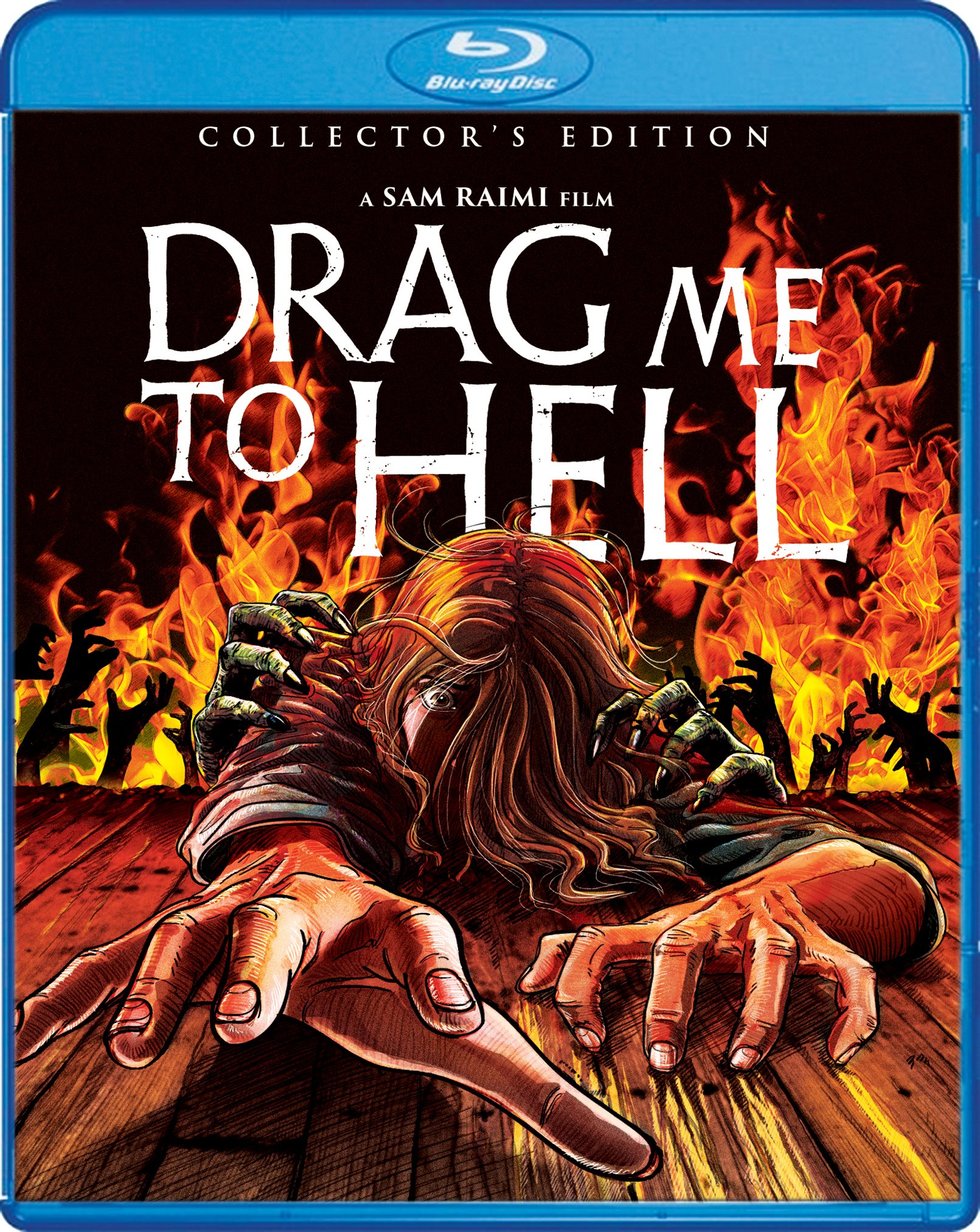 Loan officer Christine is looking to secure a promotion as assistant manager at her bank, and she finds a perfect opportunity to do so when she turns down an old ailing woman who requests a third extension on her loan payment. However, this isn’t any ordinary old lady: she hands down a curse on Christine using one of her coat buttons, and soon Christine starts to experience terrifying and often slimy things, like demonic shadows and talking goats. She needs to get rid of the curse, but she can’t make amends with the old lady since she’s dead. What a girl to do?

Sam Raimi took a long break from directing anything horror-related; basically, after Army of Darkness in 1992, he moved on to bigger budget projects including The Gift and the Spider-Man trilogy of the ’00s. Eventually, though, Raimi returned to the genre that started his career with 2009’s Drag Me to Hell, a curse film about a woman who shames an old lady and subsequently finds herself trying to rid herself of demonic forces bent on, well, dragging her to Hell. For all intents and purposes, the film is a return to form – mostly practical effects, comedic and gag-related humor – for Raimi after over a decade of more serious, dramatic fare. And fans mostly rejoiced.

The film stars Alison Lohman as Christine, a loan officer looking to further her career at her bank by battling for a new assistant manager position. Immediately, Raimi and his brother Ivan Raimi set up some interesting character development for Christine; it’s pretty clear that she’s fighting the boys club at the bank, constantly set up for secretarial work as a new co-worker (Reggie Lee) moves in to steal the position despite still learning the job. It gives Christine little choice besides making a tough decision when Mrs. Ganush (Lorna Raver), an elderly woman getting evicted from her house after missing two loan payment extensions, begs for yet another chance.

Interestingly, though, Drag Me to Hell sets up a number of misunderstandings; for one, it’s not really clear to the audience who is in the wrong in this scenario. Mrs. Ganush has missed two extensions, and she’s had a number of chances to make her payments; but Christine is also put in a situation where she has to make Mrs. Ganush an example. The Raimis almost delight in this confusion after Christine, accidentally shaming Mrs. Ganush, receives her curse; in true Sam Raimi fashion, Christine as a character (and by extension Lohman as an actress) is in for a terrible time at the expense of the audience’s fun.

The rest of the film becomes the Alison Lohman Comedy Hour as Christine proceeds to be tormented by devilish devices; she’s covered in maggots, her chin is slobbered on by Mrs. Ganush, she receives a vomit bath of formaldehyde, she experiences the world’s worst nosebleed resulting in public humiliation. Drag Me to Hell is unforgiving and creepy, but it’s also extremely fun; there’s a bit of Schadenfreude here as Christine gets what’s coming to her, even if she might not deserve this measure of karma. Drag Me to Hell delights in the nature of life: it’s not fair, and any attempt to measure it in shades of black and white and good and evil will be met with chaos.

The one thing that sticks out upon this new viewing is the amount of CGI utilized; it’s a bit much, especially when compared to the film’s great practical effects elsewhere. Those flaws are easily overlooked, however, when the viewer accepts Raimi’s vision of a horror film that often slides easily into comedic territory; going with the flow akin to Army of Darkness is a lot easier than criticizing slight computer effect flaws. The film’s score from Christopher Young also helps lessen the impact; it’s a tense soundtrack, with swelling violins at every turn, keeping the viewer firmly planted in the horror realm even when Drag Me to Hell swings over to humor.

The movie opens and closes on a grim note. The beginning sees a young boy unnecessarily lost to the demons; the end finds Alison, feeling victorious, dragged down to the depths despite doing nearly everything possible to avoid her fate. While Drag Me to Hell is often funny, its dark conclusion is also a telling metaphor: actions have consequences, and sometimes they can’t be avoided. The debt has to be paid. In this case, the audience is presented with a cautionary tale inspired by 15th century morality plays like Marlowe’s Doctor Faustus; we can laugh at another’s bad fortune, but learn a lesson from it and escape our own fate. Viewing the film in this context makes Drag Me to Hell seem even more important than just Raimi’s return to horror.

Despite getting a PG-13 rating for theaters, Drag Me to Hell contains a lot of gore, and even more in the unrated cut. It’s mostly comical, from giant sprays of blood to more body-related horror like phlegm and dentures, but most of these elements are done with great practical effects.

None, except a form-fitting shirt Alison Lohman wears in a torrential downpour when attempting to give the button back to Mrs. Ganush, now rotting in a grave.

Scream Factory has released a two-disc Collector’s Edition Blu-Ray of Drag Me to Hell with slipcover for this new release. The first disc holds a new HD master of 2k digital intermediate of the unrated cut, while the second disc offers an HD master of the original theatrical cut. Both look the same, and in most ways the unrated and theatrical cuts don’t differ too heavily from the other besides a couple of second-long additions to gory parts of the film. However, it’s nice to have both options available on one release, and the HD master looks very good. However, the film was released back in 2009 on Blu-Ray with both features available by Universal Studios; comparing the two products, I would have to say that this is at best a minimal upgrade to the original video quality, which was already quite good.

The film gets both a 5.1 and 2.0 DTS-HD audio track, both of which sound very good with no noticeable drops or issues. I believe the 5.1 track is the way to go for this release simply because of the sound effects and excellent score, but both will do. English subtitles are also included.

This release collects the production diaries from the previous release of the film on home video as well as vintage interviews with Raimi, Lohman, and Justin Long which add about 33 more minutes to the theatrical disc. The unrated disc gets all of the new interviews, including a 12 minute conversation with Alison Lohman, a 16 minute interview with Lorna Raver, and a 17 minute discussion with Christopher Young about the soundtrack. Interestingly, Scream Factory was unable to conjure up an audio commentary for this Collector’s Edition which feels like a missed opportunity. The new bonus features add about 45 minutes of extras to this release, but whether that’s enough to warrant an upgrade from a previous Blu-Ray version of the film will be up to the consumer.

What I can say is that the picture quality is good but perhaps not vital especially if one already owns the film on Blu-Ray, and the extra features don’t add any significant new information about the production, especially because the interviews add a lot of footage from the film. The consensus is a mixed recommendation, but certainly pick this up if you don’t already own a release because it is the most definitive version.