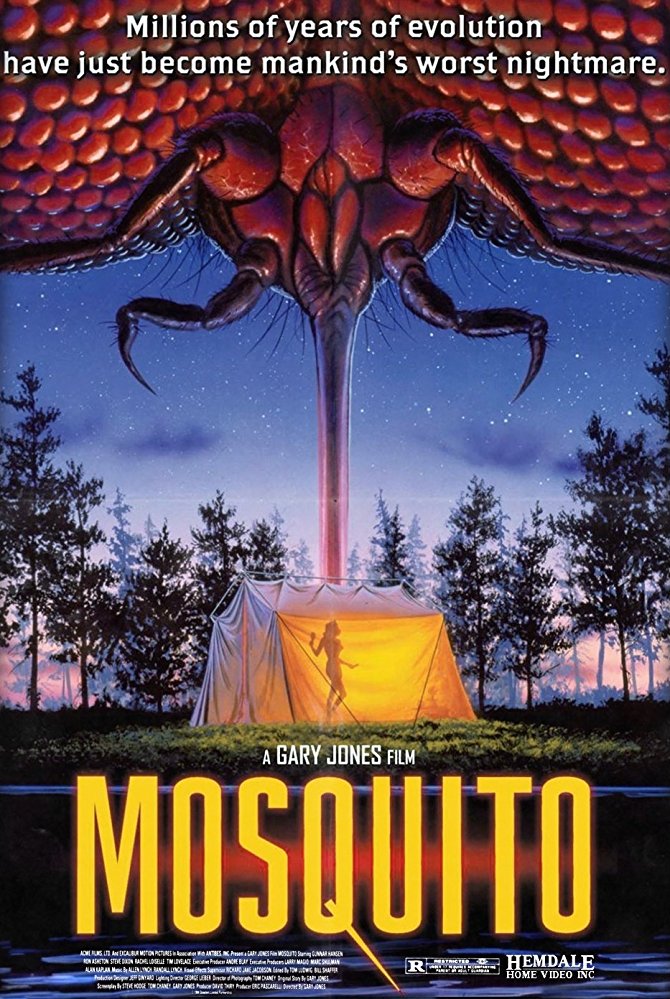 When an alien spaceship crash lands on Earth, mosquitos harvest on the dead body found inside, causing them to grow into massive killing machines. It’s up to a band of poorly fleshed out characters, and Gunnar Hansen, to defeat the gargantuan mosquitos before they become next on the menu.

We finish When Nature Attacks Week (okay, more like When Nature Sometimes Attacks as we haven’t been very consistent with posts) with the be all end all of nature attack films. Of course, the film I’m talking about is the 1994 classic Mosquito. What? You thought I was going to say another movie, maybe one that isn’t so poorly made and laughably low budget? Now, where is the fun in that!

For any of the unaware individuals that don’t know what Mosquito is all about, let me help you out there.

We start off the movie, first by ripping off the beginning of Predator, with an alien ship sending a smaller vessel towards Earth. The pilot of the ship, most likely drunk on some alien liquor, crashes his or her ship into the swamps, and nature’s most pesky insect, the mosquito starts drinking the blood of the downed alien. Before long, the mosquitos grow to massive size and start heading towards a nature park.

Meanwhile, Megan (Rachel Loiselle,) who is heading to her new job as Park Ranger at the soon to be doomed park, with her boyfriend Ray, run into one of the giant bugs, but they don’t think much of it, especially Ray, who later becomes busy giving a hand to anyone that asks. Personally, I would be shitting myself and turning that damn car around and heading back to wherever the hell I came from, preferably a place where giant insects aren’t the norm.

Also hanging around to become necessary later on when the plot requires it, is Parks (Steve Dixon,) a scientist researching the fallen ship, but to him, he thinks it’s a meteorite. Honestly, he is only in the movie to prove that the opening scene of The Kingdom of the Crystal Skull wasn’t very original.

Finally, we have some bank robbers, and one of them is played by none other than Leatherface himself, Gunnar Hansen, who don’t worry, gets to pick up a chainsaw, fondly remember using one 20 years ago, and slice and dice some bugs.

Stringed throughout this “plot” is some hilarious special effects shots of the bugs flying through the air. When the giant rubber monstrosities do kill some peeps, we gorehounds get to enjoy some lovely goop flying all over the place. I have to say; my favourite is the naked girl in the tent scene that tickles my fancy the most.

Honestly, Mosquito isn’t meant to be taken seriously, and that is pretty much clear from reel one. It’s a low budget nod to the classic giant killer insects of the 50s and 60s and has enough heart to keep the viewers interested, As long as you can get over the terrible acting from most, the weak special effects, and the straightforward story, you’ll end up enjoying it. I know, it sounds like a lot to get over, but there have been far more significant hurdles to get over in the often cinematic wastelands of low budget horror.

The mosquitos use their giant phallic proboscis’ to draw the blood of their victims. People waste away to nothing until their eyes explode. One poor girl gets it on the butt cheek. Ouch. Also, lots of gooey bugs splattering all over the place. Low budget gore galore.

We have the aforementioned naked tent girl baring it all, a mans butt and the lead girl wearing wedgy causing underwear. Not exactly smut, but it’s got some goodies.