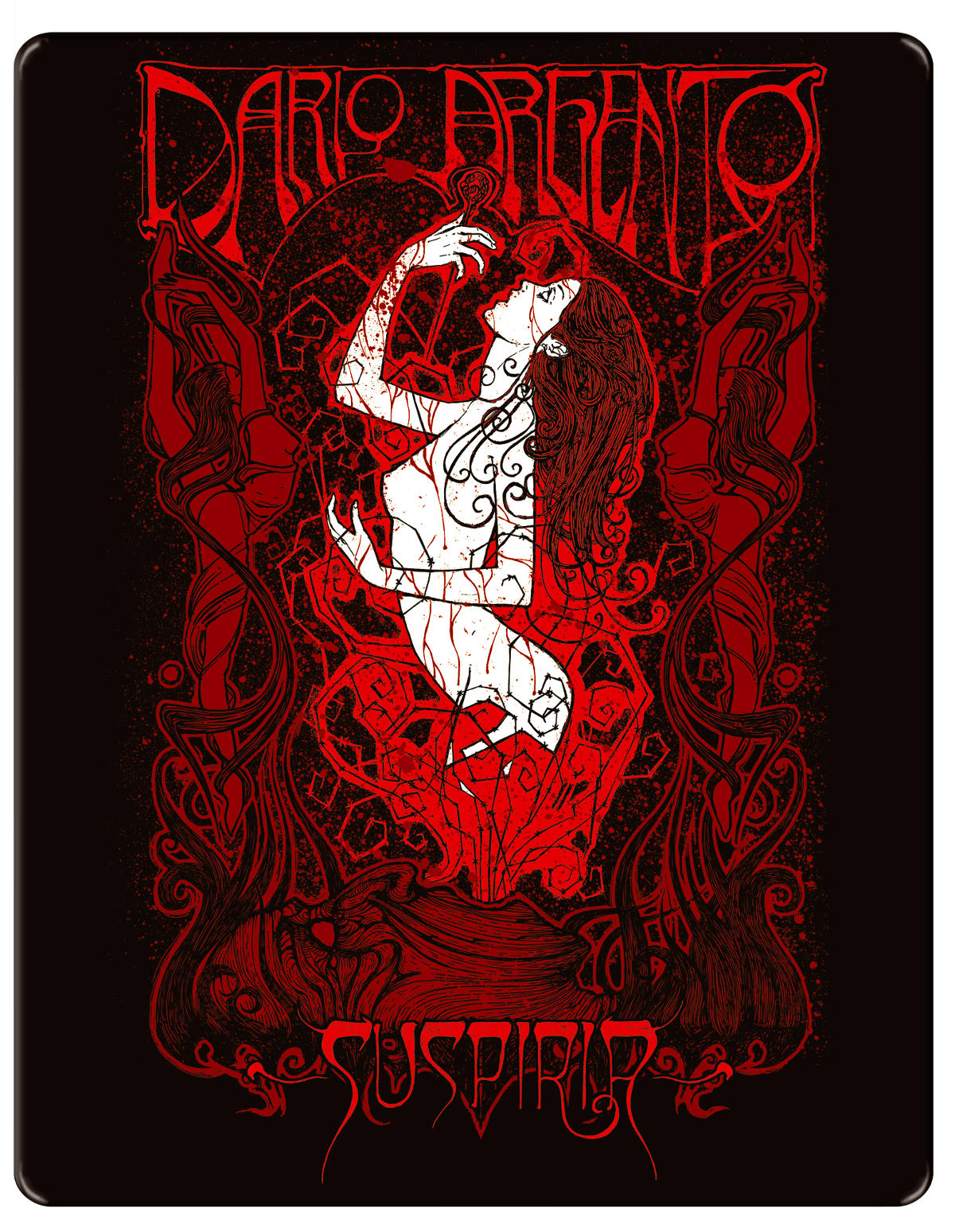 Suspiria Steelbook Blu-ray Review (Synapse Films)
Suspiria is hard to beat as one of Dario Argento's best films and one of the prettiest movies ever. Synapse Films has done their part to ensure this steelbook is the definitive transfer for the film, both with pristine 4k video and the original 4.0 LCRS audio.
Film
Blu-ray
Reader Rating3 Votes
4.8

“Suzy Banyon decided to perfect her ballet studies in the most famous school of dance in Europe. She chose the celebrated academy of Freiburg. One day, at nine in the morning, she left Kennedy airport, New York, and arrived in Germany at 10:40 p.m. local time…” And then terrible, beautiful things begin to happen!

Cultsploitation co-editor Michael wrote a review about Suspiria a couple days ago (Umbrella Entertainment Blu-Ray) and he did an excellent job pinpointing the beauty, pathos, and surrealism of Dario Argento’s film. However, people do tend to view films differently the more they’ve seen them, and rather than run down a straight review of the merits of this classic – which seems both redundant and unnecessary considering the amount of good film criticism already out there about the movie and having already reviewed it myself a number of times – I wanted to take a look at the things I found myself appreciating more during this 4k watch of Argento’s supernatural witch worship.

The first thing I noticed with this clean and gorgeous transfer was the camerawork, and I’m not just talking about Luciano Tovoli’s expert use of colors. Suspiria is meant to mess with the viewer’s perceptions just as its main character Suzy begins to lose her sense of reality while at the Tanz Institute, and Tovoli helps the audience get sucked into the proceedings by using off-kilter camera angles and, more profoundly, distorted lenses. As the camera pans around rooms, one can notice the distortion at the edges of the screen, morphing our point of view and adding a sense of unease. One of the most notable elements is during Suzy’s exploration of the room with the blue iris; the camera follows her, and the distortion makes the room feel much larger than it is. It’s almost a visual representation of H.P. Lovecraft’s otherworldly dimensions, the feeling that the angles are just not quite right.

The other new element that stuck out to me is Suspiria‘s refusal to lock down a typical film structure. In some ways, Argento and Daria Nicolodi’s script goes through the motions – meet main character, main character notices something strange, eventually main character solves the problem – but in reality Suspiria often foregoes the normal flow of its story for something more organic. In this case, Suzy is often relegated to the background of the plot: things happen to her, but for two-thirds of the film, Stefania Casini’s character Sara leads the investigation, doing all of the work to figure out that the school’s teachers are not leaving the school.

It leaves Suzy in a fairy tale state – quite often drugged in a Sleeping Beauty-esque way – until the film’s conclusion, which actually feels somewhat rushed considering the languid pace of the rest of the film. Then, she’s a witchhunter, a fighter, and Argento emphasizes her wits and power in the final climax. But Suspiria, despite all of the potential for thematic resonance with the color scheme and fairy tale scenarios, is somewhat theme-less – intentionally so. Argento and Nicolodi layer all of these strange elements together but they leave the connections disparate, forcing the viewer to put them together. In other films, that might be deemed something like laziness or incompleteness; but Suspiria feels different, as though its artistic endeavors are meant to be frustratingly out of reach. Its most explicit themes deal with power and money, and perhaps the consequences of the pursuit of both those things. The other thematic elements, though, are left up to the viewer to decide and/or decode.

Suspiria has a lot of richness, and though there will ultimately be some viewers – both contemporary and experienced – who don’t appreciate the abrupt and fragmented nature of the story, those that simply ride through the film – from the awkward dialogue to the loud, bombastic Goblin soundtrack – will find a lot to enjoy and decipher. Without a doubt the film’s color has become Suspiria‘s most defining characteristic, but hidden within those hues is a puzzle that continues to impress new and old viewers.

None, except there are multiple scenes of spandex-wearing ballet performers.

Synapse Films has been working on this Suspiria release for a long time, and it just so happens to correspond with the 40th anniversary of the film. While TLEFilms has created a 4k scan for both the German release and Australian Umbrella Entertainment Blu-Ray, Synapse Films created an entirely different 4k scan for this release using the 35mm Italian camera negative. The results are absolutely terrific.

The colors are vibrant but not glaringly so; the tones and lighting all shine, and there really is no damage to speak of on this pristine transfer. One can easily see the dust particles in the gleam of the pointy object one of the maids shines in Suzy’s eyes during her walk down a hallway. It helps to have Luciano Tovoli, cinematographer, as a primary source for the restoration, ensuring the colors are exactly the way they were meant to look.

Ultimately I can easily say that this is the best transfer I have ever seen of Suspiria and a huge step up from every release I’ve watched previously. I have not seen the TLEFilms restoration so I cannot compare, but if you’re curious to see how that transfer looks, check out Michael’s review (hint: it also looks gorgeous).

Synapse Films has gone above and beyond by tracking down the original 4.0 LCRS English audio track that would have played in theaters. This was a difficult process due to the nature of finding the elements and then being able to transfer them to Blu-Ray by extracting each of the tracks, but their efforts show why it was worth so much work. The Goblin soundtrack is still loud but not as overwhelming as some previous releases, and the 4.0 highlights some of the most important elements of the film, like the use of diegetic sound in key sequences or the abrupt stopping and starting of Goblin tunes.

For those who want a 5.1 track, Synapse has also included an Italian track that they did not create for this release. It’s certainly not as dynamic as the English audio and features some muted dialogue, but it’s nice to have two options in case one really wants to watch the film in Italian (not recommended).

Let’s talk about the steelbook first and foremost, because it is an excellent item for home Blu-Ray shelves. It features fantastic new artwork AND a slipcover, houses three discs, and includes liner notes, an article from American Cinematographer, and notes about the 4.0 LCRS audio track. Synapse even includes a 2018 catalog!

The third disc in this release is the Goblin soundtrack which includes a few tracks that are not included on the 1977 audio release. This is a great value, and fans of Goblin will want to own this disc.

The first disc holds the film and the audio, as well as an audio commentary featuring Derek Botelho and David Del Valle and another featuring film historian Troy Howarth (if you’ve heard any of their previous commentaries on Synapse and Arrow releases, you know that they are worth a listen). Also included on this disc are options for English opening and closing credits or the original Italian opening and closing credits. One can also view the film with the American pulsating letters credits sequence.

The second disc contains all of the extra features. The biggest is a retrospective of the film running about 25 minutes long including editors from Blumhouse.com, American Cinematographer, and more discussing the film and its iconic offerings to the horror genre. Also of note is Michael Mackenzie’s 30 minute visual essay defining Argento’s career, his work on the film, and the various thematic resonances of the film all set to key scenes within Suspiria.

There’s also a featurette on the German locations used in the film (like the square where Daniel is murdered that was once used as a Hitler meeting area) and an interview with Barbara Magnolfi. Trailers, radio spots, and TV spots are also included.

Synapse Films’ steelbook does have the most impressive extras simply due to the steelbook itself and the CD. Its video extras are different from Umbrella’s, so it is really a toss-up on who has the better bonus interviews. However, the 4.0 track and Tovoli-approved transfer does make Synapse’s steelbook the definitive Suspiria release, but a pricier level.