Love them or hate them, Blumhouse has had a pretty great track record taking existing properties and transforming them into horror movies. Films like Happy Death Day and Truth or Dare pull from the collective consciousness with recognizable elements, and in 2020 the company also brought us Freaky from director Christopher Landon, who swaps out the Groundhog’s Day influence from his HDD franchise in favor of the oft-utilized body swap. Aping Freaky Friday, Landon and co-writer Michael Kennedy envision what would happen if the body swap was not just between mom and daughter or old and young, but also between a final girl-esque teenager and a serial killer. The results are gory, humorous, and surprisingly successful.

The film follows Millie (Kathryn Newton), a high schooler who has a hard time fitting in except with her friends Nyla (Celeste O’Connor) and Josh (Misha Osherovich) – which may be the most unbelievable thing in the whole movie considering Freaky doesn’t do anything to make Millie seem like an outcast. She’s eventually targeted by the Blisswood Butcher (Vince Vaughn), who has succeeded in killing a bevy of other high school kids and wields an ancient Aztec blade. Said blade has an enchantment on it that causes the stabbed and the stabbee to switch bodies (on Friday the 13th no less), with only 24 hours to reverse it. Queue the Freaky Friday resemblance and mistaken identity crisis.

While Freaky isn’t exactly a new idea, it gets away with its overdone premise by navigating away from the usual stuff. Here, there are less riffs on having boobs and a penis and more about being mistaken for a serial killer since the whole town recognizes the Blissfield Butcher from a police sketch. And though Vaughn is pretty widely known for his over-the-top comedy antics, he plays it pretty down-to-earth here with a nuanced and studied approach to portraying Millie. It could have been a disaster, but honestly he’s one of the best parts of the film and Freaky has a number of tender moments thanks to his controlled acting.

But Freaky really excels at its sporadic gore moments, since the Blissfield Butcher seems to be interested in murdering in only the most creative of ways. The film doesn’t skimp on these killings, but it also doesn’t get bogged down in an endless sea of innocent victims either; the fodder here are intentionally unlikable, with the film often commenting on the plight of young women and the predatory male gaze. It’s not particularly subtle, but Freaky‘s themes about finding empowerment are a welcome and unique approach to the final girl formula.

Overall, fans of slasher films should certainly find something to like in Freaky despite its decidedly comedic approach to the subject matter. There are still lots of references here, from Friday the 13th to Candyman (and even a deleted Nightmare on Elm Street-inspired scene), and tons of gore mixed in with the humor. Landon has struck again with another film that is far better than it should be based on its premise.

Universal has released Freaky on Blu-ray with the Killer Switch edition, which also includes a DVD version and digital code. Video quality is top-notch here, with nary a compression element or banding issue in sight. Overall definition is excellent, and colors and textures really pop (note the party scenes with blue hues). Other reviewers have noted the presence of digital noise apparent throughout the film; I did not have a chance to see this movie in theaters, but this digital noise looks intentional to me, added in post-production to simulate the grain of an ’80s slasher film. Whatever the case, this noise is present the entirety of the movie, which leads me to believe it is not an error.

Audio is presented with a DTS-HD MA 5.1 English track, which sounds excellent. There are no volume issues or other notable distortions, and the satellite speakers are put to good use with ambient sound and score swelling. Also included are French and Spanish track, though note that they are standard DTS audio of lower quality. Subtitles are also included.

Extras include a few production featurettes with cast and crew, including a look at the final girl subversion in the movie, the kill composition, Christopher Landon’s direction, and the nuance between Millie and the Blissfield Butcher. They’re all quite short. Also included are deleted scenes, the most notable is that ANOES reference mentioned earlier that didn’t make it into the final cut. An audio commentary with Christopher Landon adds replay value to the feature. This release also comes with a slipcover.

Freaky is a surprisingly solid slasher from Blumhouse, and Universal has given it a great release on Blu-ray with excellent sound and video quality and a number of production extras. Definitely seek it out. 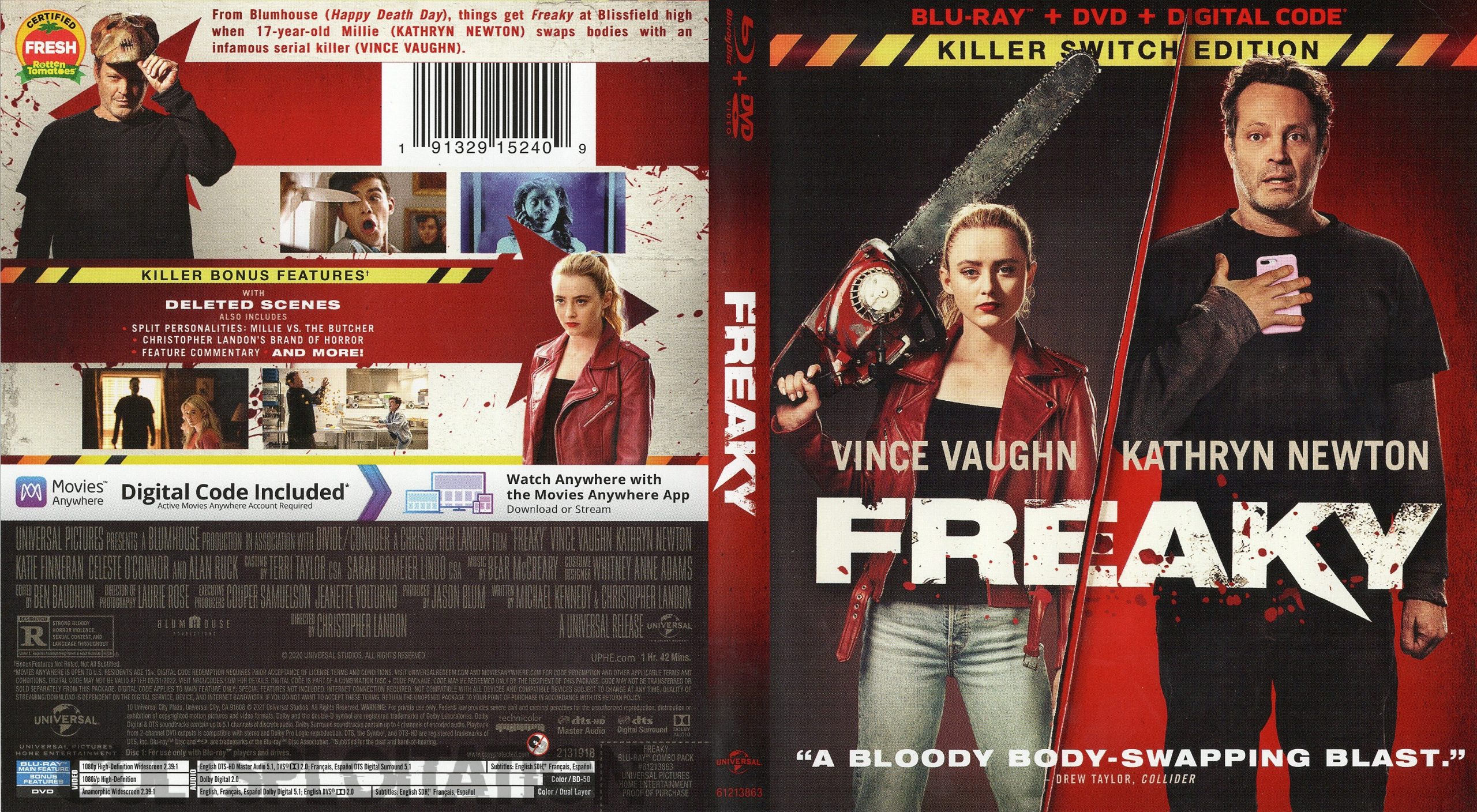