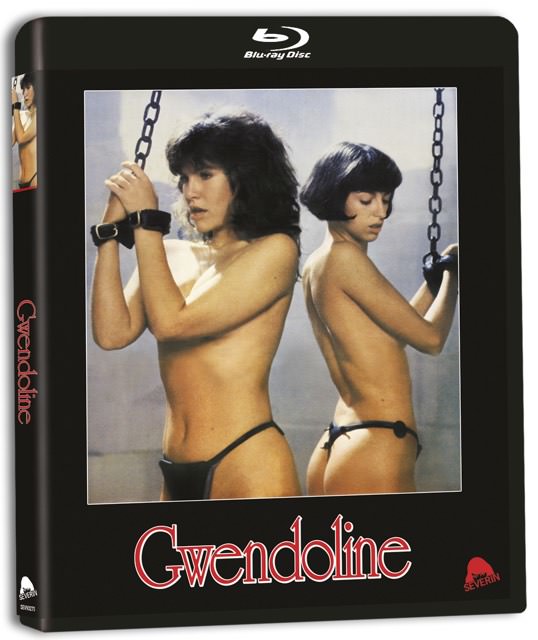 There is something special about watching a movie that would never be made today in the highly PC toxic environment we now live in. Gwendoline is one such movie that does everything offensive it can think of. It features a male lead who is rude, sexist, racist, and downright cruel. It features a female lead who no matter what said male lead does to her, be it calling her names, hitting her, throwing her off a boat, she still ends up falling head over heels for him. The film’s second half also features so many naked ladies who are tied up, chained up, tortured, and used as horses in a cart race, you easily lose count of how many offensives this flick has checked off. But do all these crimes against our current generation make Gwendoline a good film? Not really, but fuck it, I still enjoyed the shit out of this film.

The premise for the film sees Tawny Kitaen playing our titled character Gwendoline, who is on an adventure to find her father, who himself is seeking out a mystical butterfly that is only found in the land of Yik Yak, a dangerous land featuring a whole bunch of dangerously naked ladies. Along the way she meets Willard, a sexist dickbag who hates Gwendonline and her friend Beth, but has no problem suddenly being nice so he can have tantric sex with them. The trio finds the land of Yik Yak and becomes involved with an underground diamond smuggling business that for some reason can only be mined by naked, bald ladies with big fake titties. This movie is truly insane.

Gwendoline is a film that isn’t appropriate for any sort of critical analysis due to the film being so damn out there in its weird genre of sleaze and adventure. It’s like Indiana Jones if Indy’s adventures involved beating up women and being forced to have sex for a sadistic queen’s pleasure. The film itself is technically awful, but it is also enjoyable. That’s all we can ask for…well all I can ask for. Others would probably want a better story and better acting. Me? GIVE ME THOSE TITTIES!!!

Severin Films isn’t one to skimp on a Blu-ray release and Gwendoline is no different. We are provided with the longer cut, that clocks in at 105-minutes and features more dialogue and nudity. Don’t worry, if you hate nudity and plot development, the US 88-minute cut is also included. Both have a nice looking transfer (new 4K scan of the original negative) with solid audio (Uncut features English and French tracks in both 2.0 stereo and 5.1 DTS-HD Master Audio and US version features English and French Dolby Digital 2.0 stereo audio and optional English subtitles). And if interviews are your thing, you’ll be very happy with the included bonus features. It’s always fun seeing someone discover what a merkin is for the first time.

Note: BD Info was unable to scan the individual film and audio bitrates.

If you ever wanted an Indiana Jones film with a ton of nudity, Gwendoline is your go-to film. Severin Films releases a standout Blu-ray worthy of picking up.
Film
Blu-ray
Reader Rating3 Votes
The Good
Lots of Nudity
Plenty of Special Features
A solid 4K transfer from the uncut original negative.
The Bad
The middle of the film drags a bit.
4.2
Hosting screenshots is expensive. If you want to see more galleries, consider donating!