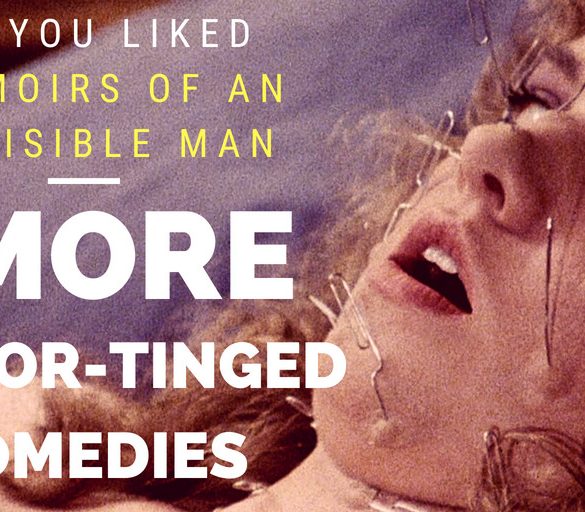 If You Liked MEMOIRS OF AN INVISIBLE MAN: 5 More Horror-Tinged Comedies

Memoirs of an Invisible Man was an experiment for John Carpenter – he assembled a funny leading man in Chevy Chase and opted to explore the lighter side of horror by utilizing the classic HG Wells character – the Invisible Man.

Transplanting common horror characters into comedies wasn’t new in 1992 when Carpenter did it, though. The idea has been around for years, most iconic when Abbott and Costello met Frankenstein and the rest of the Universal monsters back in the late ’40s and ’50s. We’re not going to go back that far in time for our list of horror-tinged comedies, but we will take a look at some classic ’80s films that have similar tones to Memoirs of an Invisible Man. As always, we invite you to tell us your own favorites in the comments below.

This 1985 film starring a young Jim Carrey has a lot of things to love about it – it’s a classic virgin sex romp with sexy leading ladies, it’s set during Halloween, and it’s actually pretty funny. It’s also very reminiscent of another high school film about a kid going through some changes – Teen Wolf (seriously, the plot is nearly identical in its structure). While it doesn’t hit the highs of those other films, Karen Kopins is super cute and Carrey showcases the personality that would later make him a big-name comedy star. Interestingly, this was also director Howard Storm’s only theatrical film – he stuck to sitcoms before and after.

Hey, look at that! We’ve assembled the parents from National Lampoon’s Vacation in one post! However, Beverly D’Angelo is not the main star of this 1988 comedy from Neil Jordan – Daryl Hannah is! That’s right – before Memoirs of an Invisible Man, Hannah showed up in a similar horror comedy that played a lot like Beetlejuice (released earlier the same year). High Spirits is an amalgamation of different horror tropes including scary old castles, Irish banshees, and the titular spirits, and while it’s not nearly as funny as most would hope, it’s still a pretty good time. Surprisingly, it’s also a movie that earnestly explores infidelity. For the sake of comedy!

So I Married an Axe Murderer

While Mike Myers struck big with Wayne’s World, his follow-up feature So I Married an Axe Murderer didn’t do so hot. Maybe it was because audiences didn’t love the black comedy inherent in this slasher-inspired romance. Whatever the case, the film has been unfairly relegated to the back of movie shelves. It may not be Myers’ best offering, but it has charm and a potboiler plot that plays out like an extended sitcom or a quirkier episode of Tales from the Crypt. Nancy Travis plays the suspected axe murderer in a time before she got sucked into the black hole of Last Man Standing.

Student Bodies hit in 1981, which is actually a surprisingly early period in time considering the appeal of slasher films hadn’t even hit fever pitch yet. Mickey Rose’s parody is funny, raunchy, and even a bit metacritical, and it helped inspire a number of very similar films later on like Shriek If You Know What I Did Last Friday the 13th and Scary Movie. Student Bodies even helps viewers calculate the death toll with a nice body count tally during each “murder.” Another film we could have included here, released in the same year, is Saturday the 14th.

Transylvania 6-5000 is like a follow-up to those aforementioned Abbott and Costello Meet films – its characters (including Jeff Goldblum and Ed Begley Jr.) find themselves encountering all kinds of hidden horrors during their travels to Transylvania to find Frankenstein. Big name actors abound in this film despite mostly local Yugoslavian extras, but the film was never really a theatrical success despite its experimental attempts at horror comedy. Perhaps the confusing name didn’t help (a pun on a Glenn Miller song). Still, it’s worth a look, especially if you’re a big fan of Goldblum; and the movie packs in a surprising number of iconic monsters.