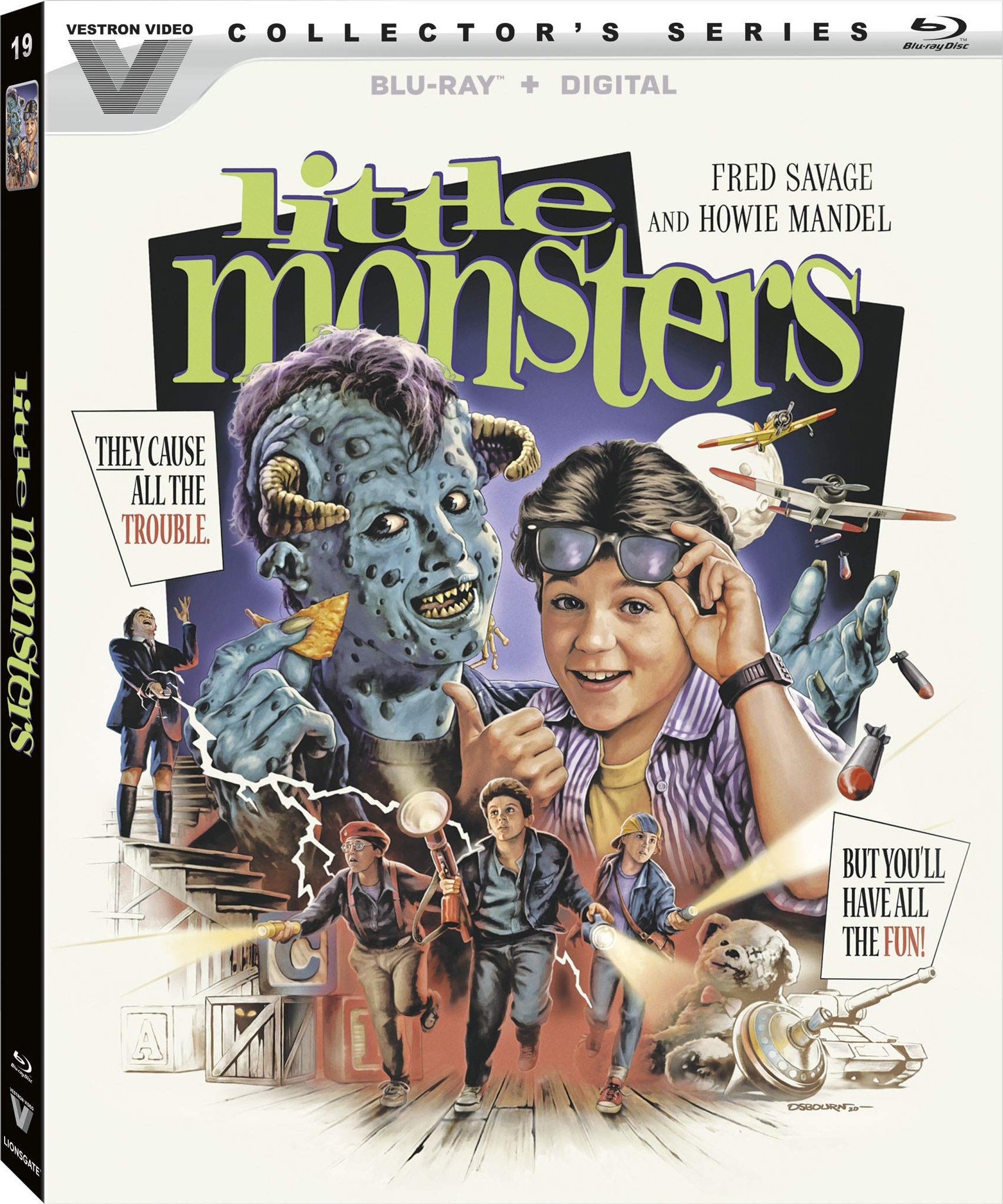 You'll have to join 'em if you can't beat 'em

Richard Greenberg’s 1989 film Little Monsters envisions a wonderful world underneath kids’ beds, populated by monsters who used to be children before they got stuck in the magical underground. For a kids’ movie, the stakes are actually pretty high: stay too long under the bed, and you’re stuck there after the sun comes up. But the movie juxtaposes that terror with the high energy of its main monster Maurice (Howie Mandel), who turns up the mischief for his little buddy Brian (Fred Savage).

Years before Monsters, Inc. did effectively the same thing, Little Monsters crafted a creative populace full of magic and monsters that doesn’t seem out of place in similar-themed films of the time like Beetlejuice and Edward Scissorhands. Monster designs are unique and well-crafted, with a wide range of characters that, while not fully expanded upon, show up throughout montage elements of the film as Maurice and Brian travel through the underworld. The film’s overarching plot involves the more evil monsters that even Maurice leaves alone – a villain named Boy (Frank Whaley) and his giant-necked henchman Snik (Rick Ducommun).

Greenberg spends most of his time focusing on the friendship developing between Brian and Maurice, and a B-plot related to Brian’s newfound interest in Kiersten (Amber Barretto). Those friendships have the most lasting impact on the film with a touching end sequence between Brian and Maurice with a lot of chemistry. But it also means that Little Monsters doesn’t have much time to spend on Boy’s motivations; that element of the story feels rushed, and the concluding battle is somewhat anti-climactic. In fact, because of Boy’s limited development, the motif behind his character (intentionally or unintentionally) hints at pedophilia, his only intent being to keep Brian underground as his plaything.

But Little Monsters is successful in most other respects. It effectively navigates the horrors of real life as well as its imagined underworld, dealing with the fallout of Brian’s unhappy parents (Margaret Whitton, Daniel Stern) that seeps into his everyday life. And its comedy works for both adults and kids – Mandel brings the chaotic goofiness, while the swearing and hint of adult themes appeal to older demographics.

Little Monsters is an imaginative movie full of wonder and possibility, with an endearing plot about unlikely friendships. Its horror elements pair well with Mandel’s comedy, making the film fun for the whole family and a nice counterpoint to the Disney/Pixar mushiness of Monsters, Inc.

Vestron Video is back after a long hiatus with a new Collector’s Series Blu-ray of Little Monsters at a more-than-reasonable price point (in some cases, you can find this for just under $10). With low costs come some drawbacks, though, and Little Monsters’ most evident consequence is the lack of a new transfer. The video quality on this release is subpar, and it appears it is most likely the same HD transfer that has been floating around on streaming services.

Overall definition is not great, with a poorly-managed grain scale obstructing some detail. The grain is chunky and occasionally causes an apparent flickering effect in certain lighting. Also of note is the black crush on display; Little Monsters is an intentionally dark film since most of it takes place in the monster underworld where light is forbidden, and this Blu-ray does not do a good job with delineation. This murkiness can sometimes make it difficult to make out certain elements on-screen. Color timing is well-handled since the film has a variety of blue- and red-tinted sequences, and these look fairly good. However, the full result is a mixed bag, one that I must admit doesn’t look a whole lot better than my old DVD version of the movie.

Provided audio is a DTS-HD Master Audio 2.0 track which sounds fairly good. It is not particularly bombastic but dialogue is well-mixed and the score is also represented to full degree. English, Spanish, and English SDH subtitles are included as well.

Where Little Monsters makes its worth known is in its extra features. Vestron has really come through here with a variety of new specials including an audio commentary with Jarret Gahan, an isolated score with interviews with composer David Newman, and a few new interviews. Gahan provides an excellent commentary with context about other films in the time period as well as Little Monsters‘ use as a gateway horror film and comparisons to the script; Newman’s commentary discusses the usage of the score in the film, and lasts about 17 minutes before the isolated score selection kicks in.

One of the biggest treats here is an interview with Howie Mandel, which is a surprising addition to this release. He’s funny and personable, and fans will definitely want to check this 18 minute interview out. A new 14 minute interview with producer Andrew Licht discusses his background in filmmaking and how Little Monsters‘ production occurred, including hiring the main actors (and how Macaulay Culkin almost got hired). The final new interview is with special makeup effects creator Robert Short, who goes into detail about the various monster designs and particularly Boy, who he states is his favorite due to the gruesome human face.

Also collected on this Blu-ray are some previous extras including vintage interviews with various members of the cast including the Savages and director Alan Greenberg, behind-the-scenes footage, a featurette of makeup application for Mandel, a vintage EPK, trailer, and still gallery. Overall, very strong extras for this release, and the package includes a slipcover as well.

While the transfer may be disappointing, the number of extra features contained on this Blu-ray certainly makes this worth picking up at Vestron’s current low price point. If you have any interest in Little Monsters, this should definitely find its way into your collection.