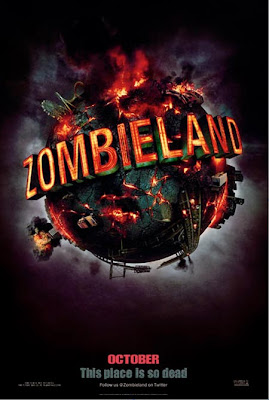 Most horror comedies don’t appeal to me, mostly due to having only semi-funny jokes and skimping on the more serious side of the horror genre. Yet Zombieland is a different breed of horror comedy, seamlessly blending both distinct types of film together to create a highly funny and scary gorefest.

The film has a way of hooking the audience from the very beginning, with its slow-motion zombie attacks being the highlight of the credits. But it is really our main character, “Columbus” (Jesse Eisenberg), who gives the film a plentiful dose of relatibility. Columbus narrates some of what we see on-screen, but instead of becoming too focused on supplying the viewer with information that could have been pieced together on one’s own, Eisenberg’s voice-overs contribute to the comedy and supply the quirky rules for living in a society overrun by zombies.

Columbus is a rather nerdy loner who is making his way from college to his parents’ house. Developing a set of “rules” that corresond well with all of the cliches of zombie flicks, Columbus has survived thusfar because of his ability to outsmart the dumb zombies where others couldn’t. Along the way, he stumbles on a gritty cowboy, “Tallahassee” (Woody Harrelson), which is where the city names come in – Tallahassee doesn’t like to get too attached to the people that he meets in case they are taken down by zombie hordes, so he calls people by the city of their home. Tallahassee is an ass-kicking zombie hunter who has made his way through the zombie infestation by brawn and hatred of zombies. Both loners decide to band together, at least as far as Tallahassee is willing to take Columbus, but they are hustled by two younger ladies, one of which is played by Abigail Breslin, who steal their car and their guns. Later, they meet up with them again, and though being tricked by their ploys, decide to travel with them in hopes of finding some safe civilization. Columbus begins to fall in love with the older of the two girls, “Wichita” (Emma Stone), and Zombieland becomes both a love story and an escape from hungry zombies.

Naturally, the audience comes to root for Columbus and Wichita together, not through the use of cheesy love-story plot elements but through sheer charisma. Zombieland is not a romance, but its romantic elements are surprisingly good. Plus, the love story does not detract from the sheer mayhem of the world.

Columbus’ rules, too, show up as an entirely new addition to the zombie realm. Though Zombieland works to satirize the zombie film formula, it is also a smart addition to a genre chock full of dumb characters and mindless intestine-gnawing. The rules allow for the characters to use their smarts; they obviously survived so long for a reason, and their characters feel both helpless and able-bodied. This gives the film that sense of horror along with the comedy; we root for the humans hoping they survive, feeling like they can survive, but they are still victims.

Fortunately, the film does have some gratifying scares that catch the viewer off guard. The violence is extreme, complete with hammers to the face and tons of zombie beat-downs. Woody Harrelson is excellent, and someone has a cameo. Everything fun about zombie films is somehow worked into the movie’s short hour and a half run-time.

The comedy is also excellent. Many times, I find that the funniness of horror comedies is completely lacking, more based on stupid one-liners than anything else. But Zombieland brings the laughs in spades, because it knows how to manipulate the cliches that we all laugh at in bad z-grade zombie flicks into something fresh and original.

If you see a horror comedy this year, make Zombieland the one. Fun, fresh, and absolutely entertaining, the film is one of the smartest comedies I have seen in a while, and probably even one of the better horror films to release this year. And I have to mention again, someone has a cameo in a completely ridiculous and hilarious scene.