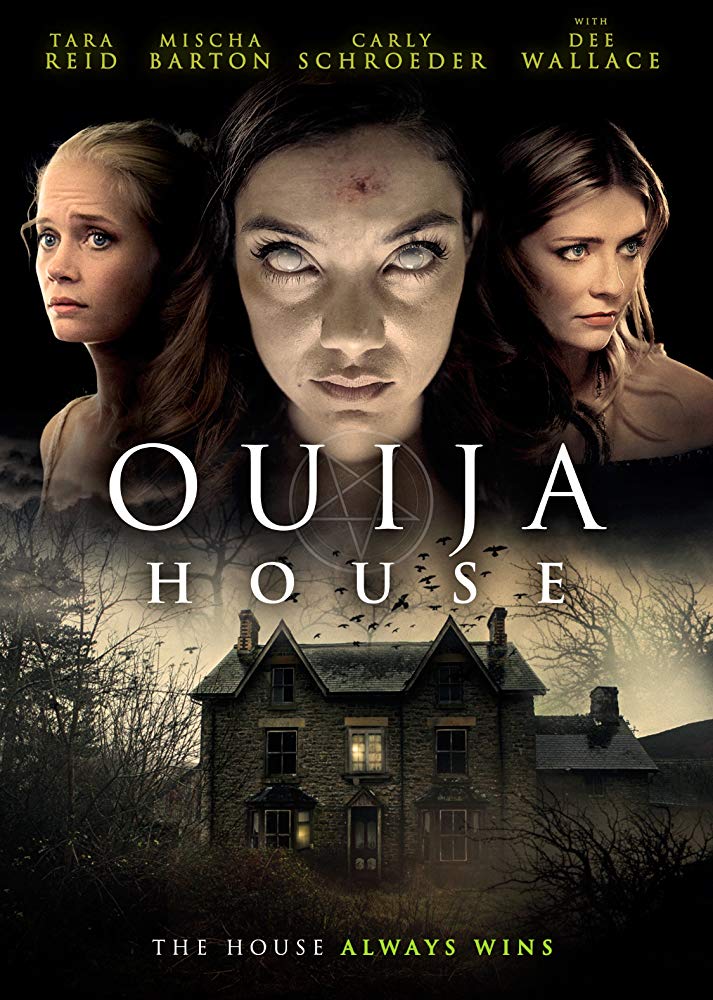 The only joy you'll get out of Ouija House is by making fun of how terrible it can be. The DVD from Umbrella Entertainment offers no special features.
Film
DVD
Reader Rating0 Votes
1.8

Sometimes you watch a movie and say to yourself wow that was really good. Ouija House is not one of those movies. Sure, you’ll be saying wow out loud quite a bit during the incredibly long 95-minute runtime, but it won’t be for the reasons you are hoping. Unless, of course, you are hoping for a convoluted mess that has more laughs than most comedies. Yeah, that’s not a good thing when watching something sober.

Ouija House starts with a teenaged 40 something played by Tara Reid, who is heading over to her friend’s house to drink some booze (hopefully they don’t get caught by their parents; it is a school night after all) and play on an Ouija board for no apparent reason. Tiffany Shepis shows up to cash a cheque and promptly leaves. Before you know it, Tara Reid is flying out a window, and we are jumping ahead 30 years. We are thrust into the problematic life of Dee Wallace; who is losing her house to the bank, a house that is 100 years old. I assume she had about 20 or so mortgages placed on the home. Her daughter, Laurie (Carly Schroeder) shows up to help pack, but only for a minute so she can to tell her mother she is heading to the old family home, the same house from the opening, to do some witch experiments with her friends. Dee Wallace isn’t too happy about it, but what she doesn’t know won’t kill her, or will it? Dun dun dun.

Laurie and her “friends” arrive at the house and hook up with Mischa Barton, who has nothing better to do than star in this movie. Supposedly the house is built on some land that was once home to an evil warlock, who liked to play a word game and paint blood on witch titties. Yadda, yadda, yadda, the good witches killed him and buried him under the house (spoiler alert) and so forth. The group find an Ouija board, summon this evil warlock, and one of the chicks turns into a walking planchette and runs around the house hitting her head on the walls. Also, Laurie’s boyfriend (Mark Grossman) needs to confess some convoluted backstory that doesn’t move the plot forward at all. Eventually, everyone watching the movie is screaming at the TV for it to end. End! Please end!!! END!!!!

Ouija House is a terrible movie. The plot is full of so much nonsense; it’s hard to follow what the hell is going on. Is there anything in this movie that is worth seeing? Well, a couple of the women are hot, and one paints her (Grace Demarco) body like an ouija board and deepthroats a rock. That’s cool. Hey, maybe the DVD from Umbrella Entertainment has some worthwhile stuff to check out?

No. No, it doesn’t. The movie starts right away, and after the credits, it doesn’t even go back to a menu. Sadly, this means no informative Tara Reid commentary. Son of a bitch! The DVD does have 5.1 audio, so that scene of the cell phone ringing really uses the rear channels to great use. Amazing.

Part of me recommends checking out Ouija House, so you to can suffer! If you’re watching it with friends, you’ll get some laughs. However, you’ll also have wasted 95-minutes of your life. Choose wisely.