Larry Cohen’s Perfect Strangers may not surprise anyone. It’s a film about two unlikely people meeting in the thick of New York City, forming a relationship, and then slowly figuring out if they can reconcile their innate differences. Cohen’s low-budget filmmaking is certainly on display here with the picture’s simplistic setup, but the emphasis on story and the film’s character arcs makes up for the lack of action throughout this neo-noir.

Perfect Strangers stars Anne Carlisle fresh off of Liquid Sky as Sally, a feminist clothing rehabilitator (is that a thing?) – basically she fixes up clothes and then sells them to the local thrift store. Her son Matthew (Matthew Stockley) witnesses a murder in their back alley, and the perpetrator Johnny (Brad Rijn) gets close to them to figure out if Matthew is going to spill the beans on his identity. The kid can’t talk, but Perfect Strangers continually questions how much kids pick up from things around them – with Cohen concluding that it’s actually quite a lot. Of course, in the meantime Johnny and Sally fall in love while Johnny’s Mafia goons continue to hound him to off the kid.

Cohen’s film is a lot about agency – it’s about multiple characters having a choice to do something that they might not necessarily agree with. For Sally, that means reconciling Johnny’s tough guy attitude with her attraction to him and her own feminist views; for Johnny, it’s quite literally whether he should kill a kid or not. Cohen’s script isn’t exactly softspoken about its themes – in fact, quite the opposite since there’s a song by Michael Minard with a refrain of “I’m a shadow on the walls of the city” as Johnny spray-paints his own shadow… on the walls of the city. Cohen’s certainly not mincing words, and he even brings up the rampant homophobia and misogyny in the city’s police department.

But while some of Cohen’s writing is a little on the nose, his exploration of character development – in particular Sally’s relationship with her ex-husband (John Woehrle) – is well-crafted, leading to a defining dinner scene between the two of them where Sally confronts her past’s indecisions and how she’s grown from that person. In these moments, Cohen uses Perfect Strangers as a way to ask the audience whether they think a person can grow from who they once were. Johnny’s really the crux of that issue; while he’s not exactly a character the audience will have empathy for, the big question is if he can actually get out of his murderous lifestyle.

It all leads to a suspenseful reveal that ends without much room for the viewer to digest it all – the finale occurs, and then the film is over, leaving the viewer to contemplate the fallout of the actions we just witnessed. Perfect Strangers isn’t a perfect film, and it might be a little too slow in its dramatic development for some viewers, but its anti-climax is exceptionally crafted: a reminder of free choice and the consequences of those decisions.

Vinegar Syndrome has released Perfect Strangers on Blu-ray with a new scan of the 35mm interpositive restored in 2k. The results of this quality may be a bit surprising, in part because of Perfect Strangers… shall we say, unique cinematographic choices. The film has always had an extremely bright look, with (way) overblown whites. The intention of this decision remains unclear to me; is it a juxtaposition of classic noir contrasting? Is it a mistake that they didn’t have the money to correct? Regardless, this 2k restoration certainly shows the problematic qualities of that overexposed brightness – certain scenes are extremely hazy, and white clothing literally makes characters glow, which can sometimes detract from the overall quality of the transfer. Whatever the case, this isn’t Vinegar Syndrome’s fault but a stylistic choice; still, it means that Perfect Strangers is never going to look all that great no matter what kind of transfer or restoration has been done to it.

In scenes with less brightness, the detail is quite good, with clothing and skin tone textures well-preserved. Darker scenes suffer from loss of definition at times. The film does retain an overall softness that one senses was always present.

Extra features include a new interview with Anne Carlisle over Skype due to the COVID-19 pandemic, which lasts about 8 minutes. She goes into detail about her work prior to and during Perfect Strangers as well as some background on what she is doing now – art. An archival interview with Larry Cohen is also included, lasting nearly ten minutes; he goes into the process of making the film in NYC (including how he had to intervene in a scene in which Sally’s ex-husband abducts her son) and talks about how he doesn’t like his films to be group projects. Also included is a promotional still gallery. The package also comes with reversible cover artwork.

This is a quality release from Vinegar Syndrome that has a good transfer despite the inherent lighting flaws, along with a short collection of extras. Those looking to continue their Cohen collection shouldn’t pass this up. 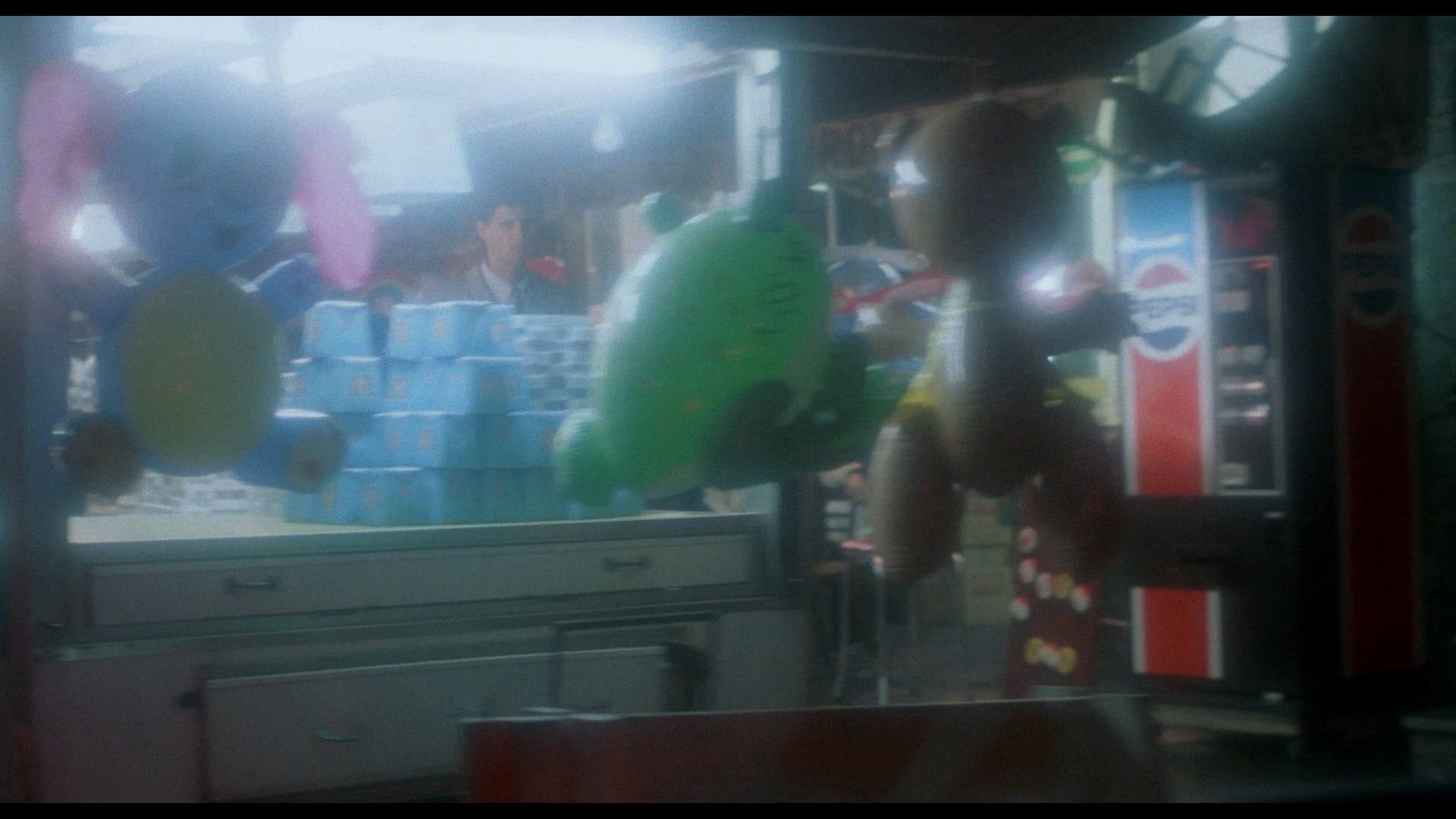 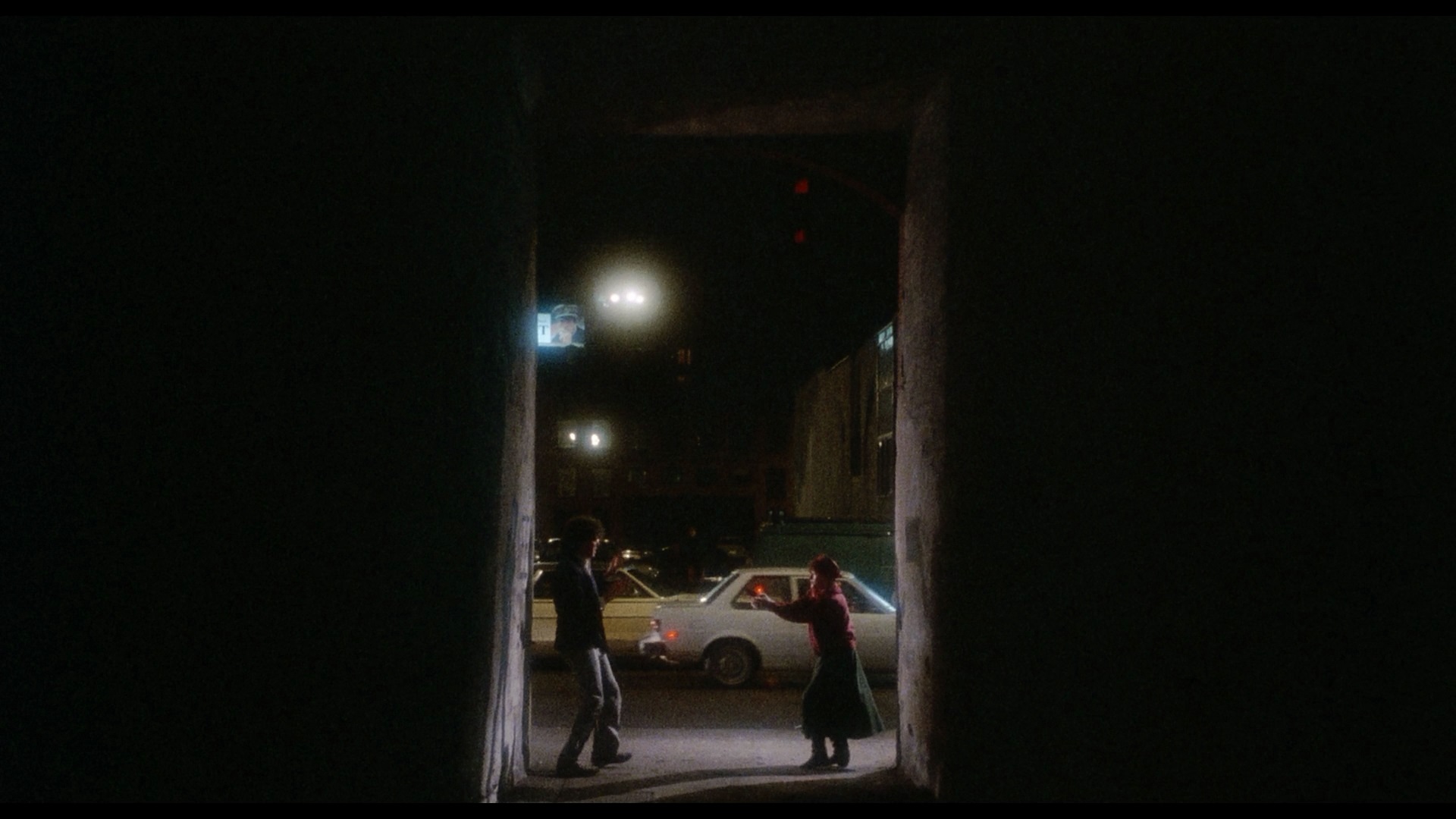 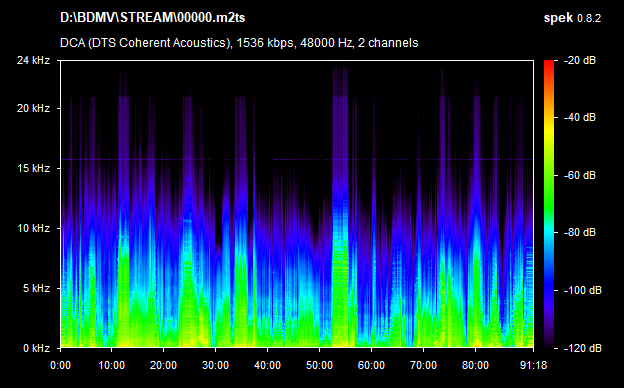 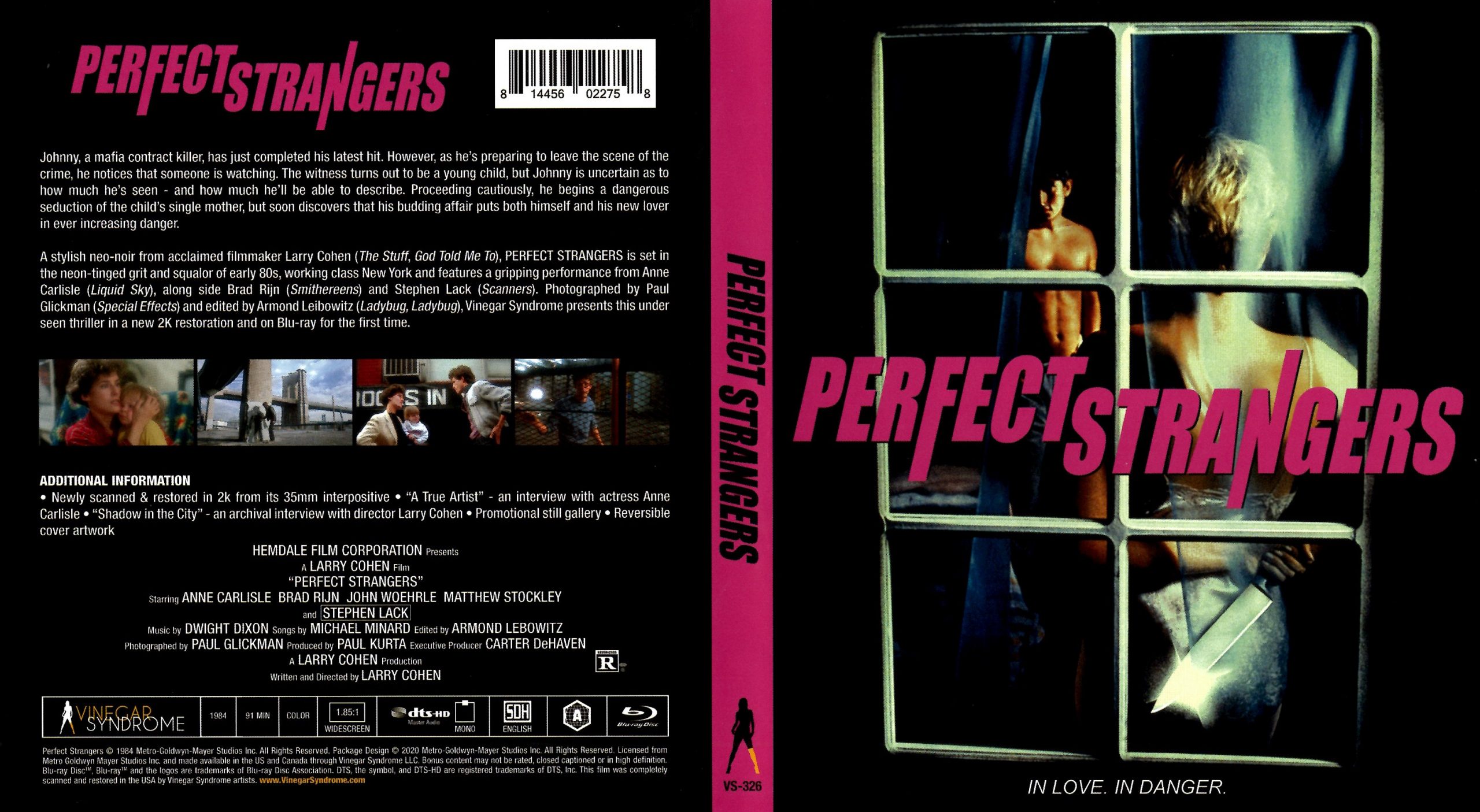 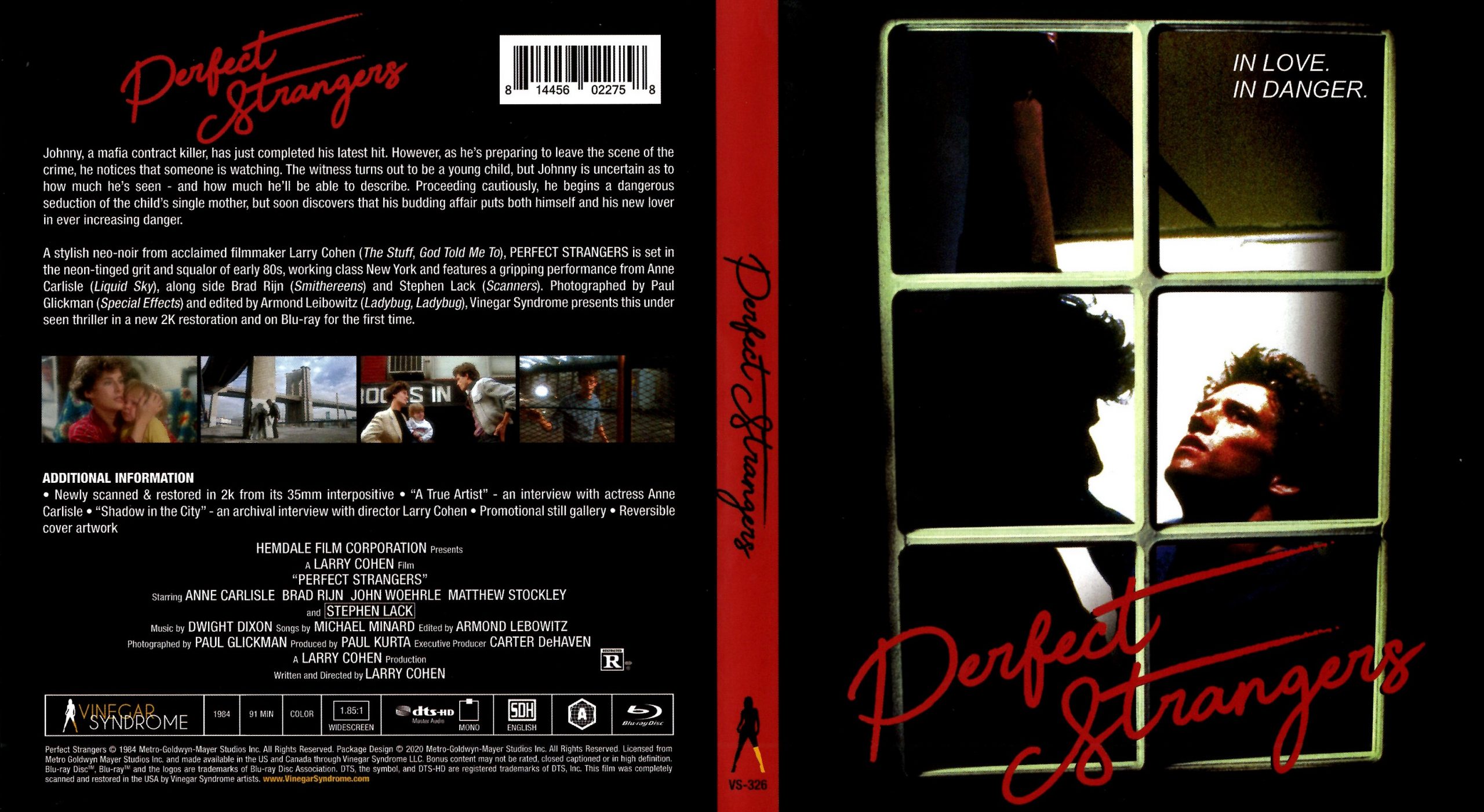 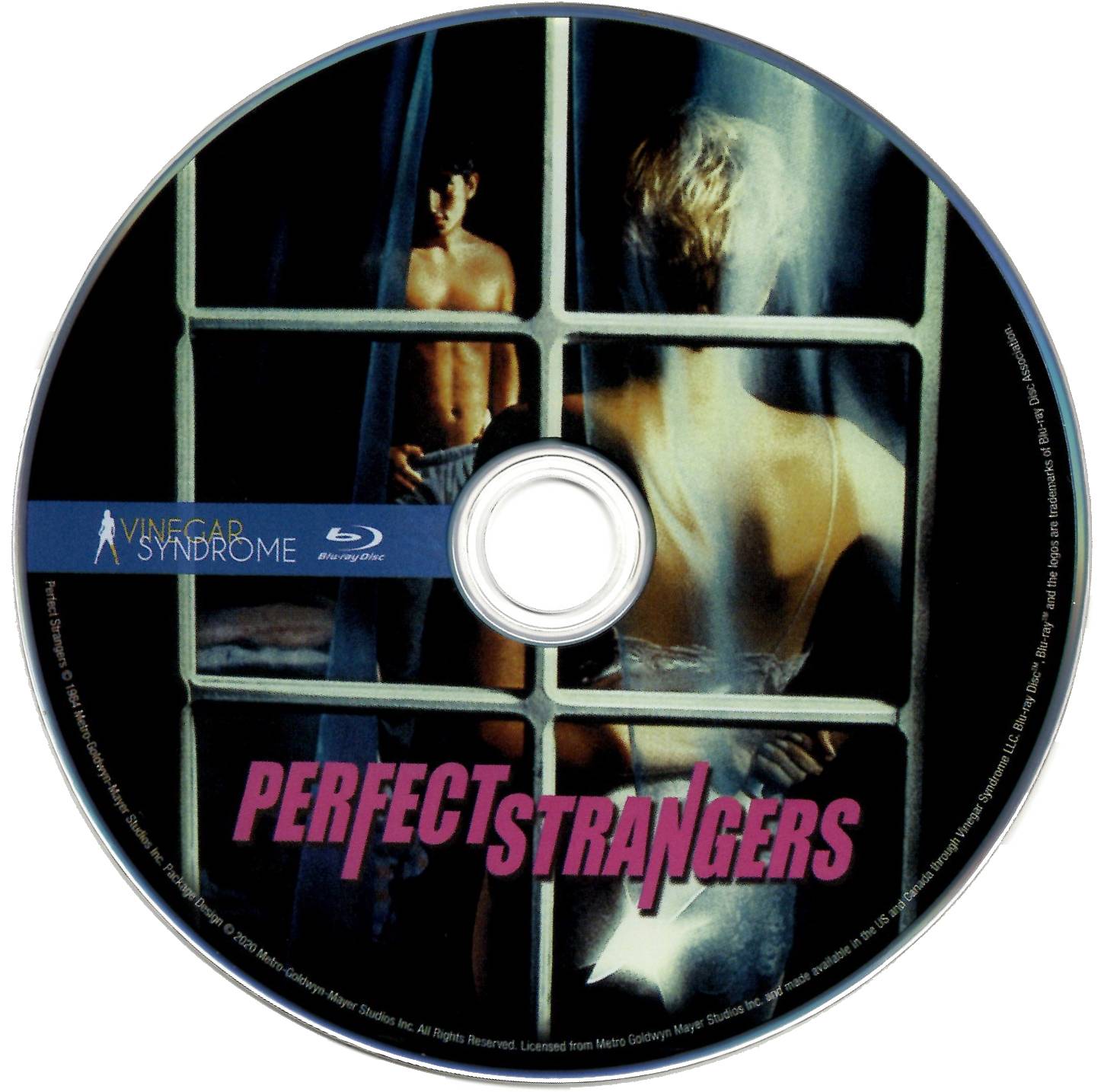